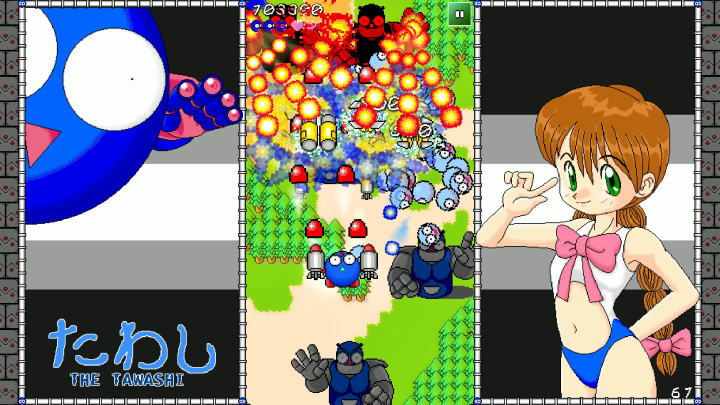 The Tawashi's Steam store page offers no story at all, and it's just as well. Wikipedia tells us that a tawashi is a sponge, but I think that's neither here nor there. Suffice to say that the game is a vertical cute-em-up that looks like it could have been released on the Sega Saturn some two decades ago, available to North American hardcore shooter fans by import only. Besides being cute, it is very odd, and very Japanese. To wit: the screen is bordered on the left by our blue circle happy face ship (wait, is he the Tawashi, and is he actually a sponge?) and on the right, an alarmingly young-looking red-head in a swimsuit.

I'm not touching that one.

Anyway, there are five stages to blast through, on any one of the five difficulty levels. Once a level is well and truly conquered, it's available at the level select screen going forward. Because of this, you can set the difficulty on Easy and have a light-hearted and relatively entertaining romp through the entire campaign in twenty minutes and never look back.

That option is available.

Of course, I'm sure the developers would want you to gradually work your way through Easy, Light, Normal, Hard and eventually the veritable curtain of relentless red-ball enemy projectiles that is Hell, to prove that you are the ultimate The Tawashi player, bathing in the continuous cascade of multi-coloured bonus point balls and unlocking the 99 achievements the game boasts along the way.

(You face a lot of balls in this game, good and bad. The eye strain is real.)

The Tawashi looks ancient, but it's actually a bullet hell, so there'll be little dodging, and tons of slipping. If you're a newbie to the genre as a whole or to bullet hells as a subset, you could do worse than to use the game as warm up, or introduction to the required skillset, as the gameplay is stripped down, and the collision detection clear and generous. Our blue face ship definitely isn't small, but the green triangle on its head that serves as hitbox marker is tiny and critically, also easy to track. While there are various weapon types that drop a few times per stage, they don't power up -- you just choose the one you like and hold the shoot button down (or hold the 'move slowly while shooting' button down). There is no secondary weapon, and no screen clearing emergency bomb here. But everything that makes the game fun and simple, also makes it simple and boring.

And so, despite any appeal its beginner feel may have, and despite the jaunty musical score, and clean -- if extremely basic -- retro visuals, there isn't enough here to warrant going back to perfect your craft after your first fly-through. This is surely no Jamestown + -- another small-ish game that at least had the sense to gate later levels behind the requirement to ramp up the difficulty, and the generosity to throw in challenges stages, and the unforgettable excellence to demand subsequent looks even if it didn't have those other things.

No, this is The Tawashi, a short, rudimentary, cute old school shooter, that looks every bit the part of lost relic from a bygone era, even if it's not; asking that we care while offering very little that is special to make it so.

If you enjoyed this The Tawashi review, you're encouraged to discuss it with the author and with other members of the site's community. If you don't already have an HonestGamers account, you can sign up for one in a snap. Thank you for reading!

© 1998-2021 HonestGamers
None of the material contained within this site may be reproduced in any conceivable fashion without permission from the author(s) of said material. This site is not sponsored or endorsed by Nintendo, Sega, Sony, Microsoft, or any other such party. The Tawashi is a registered trademark of its copyright holder. This site makes no claim to The Tawashi, its characters, screenshots, artwork, music, or any intellectual property contained within. Opinions expressed on this site do not necessarily represent the opinion of site staff or sponsors. Staff and freelance reviews are typically written based on time spent with a retail review copy or review key for the game that is provided by its publisher.