Turns out Azur Lane has been a thing for a while. Turns out mobile phones can be used for more than calling on the authorities to do something about all those kids trampling down your lawn. Turns out, should you be so obliged, you can play games on them, involving famous World War II ships reimagined as adorable anime girls. Im glad I stopped mobile phone gaming at Nokia Snake. Mobile phone games are weird.

So Im forced to revel in my Azur Lane ignorance. On phones, its a 2D side-scroller freemium gacha, where your success (or in game purchases) allow you a constantly growing collection of kawaii anime girls who can shoot down aircraft and fire torpedoes. Id never heard of it before I started Crosswave and, in a lot of ways, that doesnt really matter. While Ive little doubt the massive cast of girls on offer are packed full of countless returns, Crosswave has a go at being a standalone story of sorts. It revolves primarily around two raw recruits new to the series as they battle against the Sirens, a sinister shadow organisation with weird futuristic technology. On the fringes, at least; the appearance of the Sirens have caused the worlds naval powers to come together in order to address the situation, but disguised as a joint military exercise. Its more or less an excuse to play some war games, giving you free reason to do battle with anyone and everyone without any inconvenient hostilities or death.

Probably the biggest departure from the original games is how combat has been completely remapped to 3D. Rather than whatever they did before on their little smart screens, Crosswave works like an arena-based third person shooter. Here, youre forced to blow up (or be blown up by) massive destroyers, self-destructing speedboats, dive-bombing aircraft and cat-eared cuties in a weirdly cut kimono that offers up all the side boob you could ever want. 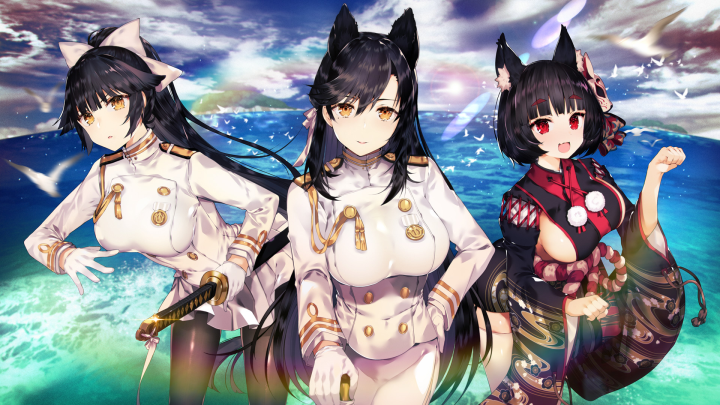 The battles themselves look and perform great. Theres a lot of girls on offer to play as or attack, and theyre all modeled elegantly and complete with what I can only imagine is a small army of voice actresses. Its very clear that a lot of time and effort has gone into capturing and upgrading the feminine fleet for their debut on sturdier hardware. But its all more than just an upgrade of the original; its a complete respec. No more free entry subsidized by in game purchases; Crosswave has a full AAA release price and isnt shady enough to make you drop more cash on top of that. No more gacha; you want sexy floaty girls? You earn points through battle and buy them once you unlock them by travelling through story mode.

It would be more than a little unfair to label Crosswave as a dressed up visual novel, because it offers a ridiculous amount of different ways to play it, but advancing through the main story is certainly a little VisNov-y. You scroll through a bit of plot involving the two new characters, theres some hijinks, and then you have a bit of a fight. I guess your enjoyment of how this plays out is going to hinge heavily on your prior investment with the series and how you fare with being rapidly fed all of the anime tropes in quick order. The games dual protagonists are very different people, meaning theyre anchored to the two big anime archetypes: Shimakaze is an excitable over-enthusiastic simpleton while Suruga is an unimpressed stoic presence with a personal secret to hide.

When that relationship isnt developing exactly as youre probably imagining, you have access to the world map, where a little chibi representation of the character youre controlling can skate across the water, mumbling to herself while collecting junk or triggering events. Collected junk (or assets won from battle) can be used to build or upgrade ship/girl weaponry. Events might throw you into another little slice of plot, or it might introduce you to a battle. These mainly consist of skating around your target in a circle in order to avoid the majority of their offense while waiting for your harder hitting attacks to come off cooldown so you can destroy whatever youre up against with very little effort or fanfare. 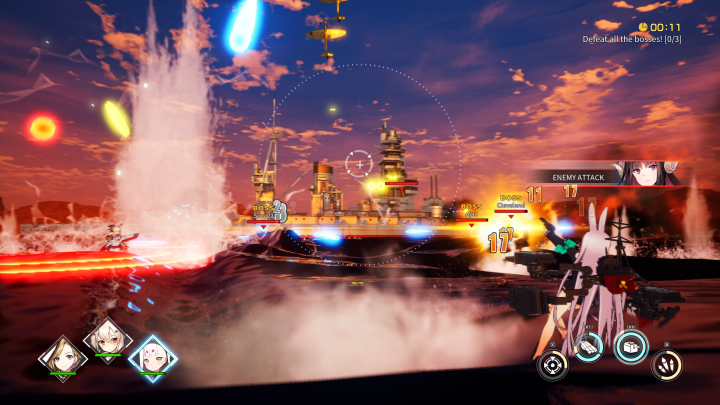 The battles themselves being so rudimentary means theyre rarely challenging, but arent particularly dull. I mean, they all play out more or less the same, but you have a cavalcade of options available to mix these up a little. New girls added to your collection can be cycled in or out of the main roster as you please, having three available in real-time and a further three acting as support craft, giving you perks such as heals or attack buffs. But theres not a lot of strategy or skill involved; if youre struggling. Youre probably under equipped or under leveled. Go back and replay some old fights, or take a jaunt back to the main menu, where new options will unlock the further you progress. Theres a new bunch of skirmishes here you should probably take advantage of, as theyre a great way to collect upgrades and grind XP. But theres also side stories that unlock as you purchase more ships telling little spin off tales, or a photo mode where you can pose your favourite three girls and take pictures of them in their clingy, wet clothes.

You can even virtually marry your favourite girl if you rack up the hours with her in your party, and Im not one to judge if that appeals; you do you. Crosswave is awash with thoughtful little options that really drive home the massive amount of work piled into the game to keep the most hardcore and niche fan happy. So its all the more impressive, then, that a complete newcomer to the series such as I was able to still find so many of these options welcoming. It might be a decent jump-on point for some, but I suspect it lends itself better to the existing fanbase.

If you enjoyed this Azur Lane: Crosswave review, you're encouraged to discuss it with the author and with other members of the site's community. If you don't already have an HonestGamers account, you can sign up for one in a snap. Thank you for reading!

© 1998-2021 HonestGamers
None of the material contained within this site may be reproduced in any conceivable fashion without permission from the author(s) of said material. This site is not sponsored or endorsed by Nintendo, Sega, Sony, Microsoft, or any other such party. Azur Lane: Crosswave is a registered trademark of its copyright holder. This site makes no claim to Azur Lane: Crosswave, its characters, screenshots, artwork, music, or any intellectual property contained within. Opinions expressed on this site do not necessarily represent the opinion of site staff or sponsors. Staff and freelance reviews are typically written based on time spent with a retail review copy or review key for the game that is provided by its publisher.