A while back (a scant decade ago, no less) a slightly less wheezy Gary Hartley sat down without his knee collapsing in on itself in all manner of interesting ways and spoke quite glowingly about Xbox Live Indie JRPG, Cthulhu Saves the World. A satirical video game that, almost uniquely, managed to avoid the majority of the pitfalls it worked so hard to lampoon. Usually when a game goes down the parody path, it completely forgets to be anything else, so the nicest thing I could say about Zeboyds earlier efforts is that if you stripped away all the clever barbs, the sense of self-awareness and the abject war waged against the fourth wall, it would still be a good game.

But now Cthulhu is back  in prequel form!

In many ways, its the same as it ever was. Theres still a very prevalent sense of sending itself up and poking light fun at the genre. Cthulhu Saves the World ran a hard focus on JRPG mocking and all things nerd, Cthulhu Saves Christmas branches out and has a go at mocking the holiday season. Which Ill now talk about in February. Because prompt time-keeping clearly isnt my thing. 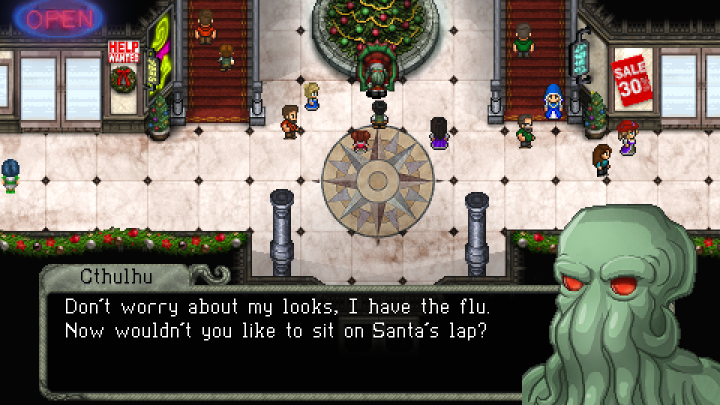 The idea here is that, just before unleashing cosmic tentacle-faced horror upon the world, Cthulhu had his powers stripped from him for being heavily featured on the Xmas naughty list. Which makes sense. However, shortly after declaring undying vengeance on Santa, he learns that the jolly fat man has been kidnapped by the League of Christmas Evil (have you any idea how long it takes to assemble a league of evil? Up to two hours! Who has that kind of time?). Assembling a team of pro-holiday enthusiasts (and also Baba Yaga, on the assumption that saving Santa will bring her better Xmas gifts) he has to whittle the league down one-by-one while the world at large is held in a perpetual state of Christmas Eve.

At the risk of sounding repetitive, the kindest thing I can say about Cthulhu Saves Christmas is that if you took away all the mocking and self-referral chicanery, it would still be a fun JRPG in its own right. Probably due to its reliance on something as subjective as humour, it does its very best not to overstay its welcome. For example, every dungeon you explore keeps track of how many random encounters you battle through and, once you hit a certain amount, random encounters are no more. You can still trigger fights manually should you desire a bit of level grinding, but I certainly wasnt opposed to being left alone while exploring forgotten corners for swag.

Its also mostly fair to say that battles are short, bite-sized affairs. But then the end game run happens and that becomes nonsense. So, for the most part, youre able to dismantle (or be dismantled) via a relatively brisk pace, though not quite on the breakneck speed of Cthulhus previous outing. Instead, Zeboyd borrows from his more recent catalogue, introducing customisable battle commands that exist alongside a random wildcard selection of skills you collect as you climb through the levels. Its all more than enough to zip your through the majority of fights, and, when the learning curve becomes aggressively obtuse, you have the ability to change the difficulty setting at any point of the game. Just in case youre some kind of filthy casual. 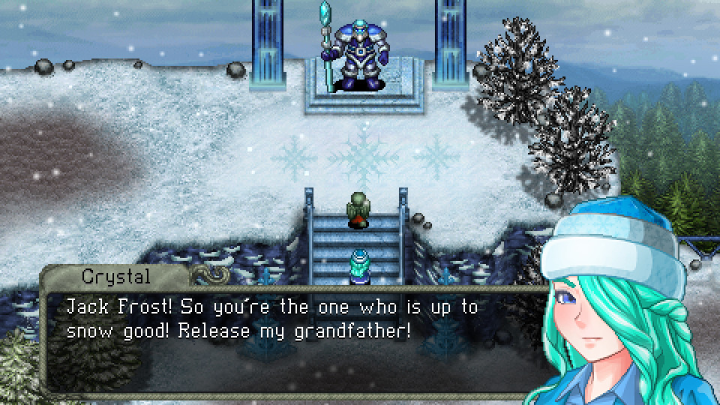 Between all that, it makes a very decent play at trying to out-pun me (between dungeons, you can spend time with various people to learn backstories and reap new equipment. The game refers to this as a Rlyehtionship builder. Which, damn it, is brilliant) and being, you know, actually funny. One boss battle should be against a gathering of antagonists before theyre smugly reminded the game engine can only fit a limited amount of enemies on the screen during battles, severely hindering their options. Everything you fight has a little subheader making fun it in some way. Baba Yaga has a live chicken on her head. You will learn things about this chicken. Unspeakable things.

But youll need its strangely destructive powers if you ever want to see Christmas Day. After that, I guess well have to wait and see what Cthulhu has a pop of saving in 2030.

If you enjoyed this Cthulhu Saves Christmas review, you're encouraged to discuss it with the author and with other members of the site's community. If you don't already have an HonestGamers account, you can sign up for one in a snap. Thank you for reading!

© 1998-2021 HonestGamers
None of the material contained within this site may be reproduced in any conceivable fashion without permission from the author(s) of said material. This site is not sponsored or endorsed by Nintendo, Sega, Sony, Microsoft, or any other such party. Cthulhu Saves Christmas is a registered trademark of its copyright holder. This site makes no claim to Cthulhu Saves Christmas, its characters, screenshots, artwork, music, or any intellectual property contained within. Opinions expressed on this site do not necessarily represent the opinion of site staff or sponsors. Staff and freelance reviews are typically written based on time spent with a retail review copy or review key for the game that is provided by its publisher.