Total Recall is a highly-enjoyable sci-fi film about espionage, self identification, and an oppressed Mars society. Total Recall is also a bewildering NES experience crammed inside a side-scroller structure, and the first stage alone encapsulates this with an awkward mash of ideas, enemies, and video game logic. Barely a few seconds after you take control of a Lego figure that's supposed to resemble Arnold Schwarzenegger, you become a victim of a drive-by shooting, assaulted by men shooting from several trashcans, and are constantly yanked into dark alleys where you literally fight a gang of little people. If you're too slow with moving forward during all this lunacy, a balding man marches in from the left side of the screen and takes away one life with a single touch.

Every obstacle and hazard mentioned above happens within the span of a single minute... You still have to contend with a "SWAT" team jumping out of windows, a mysterious figure throwing bombs down a flight of stairs, a questionable fence, and a very brief timed battle with a gun-toting Sharon Stone. Suffice it to say, Total Recall's first stage is overwhelming to the senses. This isn't the good kind of overwhelming, either; in your first few attempts to conquer this stage, you will constantly witness your health bar and lives rapidly diminish due to a combination of tricky enemy placements, "interesting" hit detection, and having a really small health bar. Doesn't help that your health doesn't refill between stages... 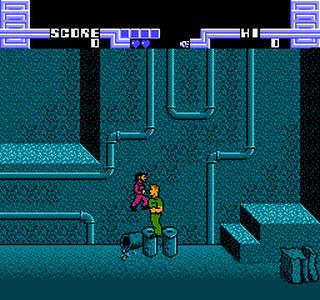 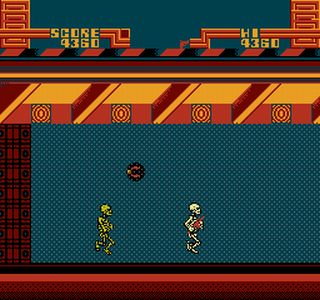 Surprisingly, after a few deaths, you get a good idea how to overcome these issues; you understand how to work with the hit detection when punching enemies, deciphering enemy movements and knowing when to goad them into your attacks, and the classic "maneuver" of inching forward a little bit to kill one enemy at a time. In doing so, you have a better grasp on how most of the game functions. Does this mean Total Recall is actually much better than its first impression gives off? Absolutely not. If anything, this just makes it so you can struggle past the opening stages without losing most of your lives and health. That's what's wrong with the game: you're expected to break it down, to exploit mechanics and oddball AI nonsense, in order to make any true progress, because trying to succeed normally is detrimental.

Strangely, however, after you get past those opening stages, you're treated to a set of typical side-scrolling areas during the middle portion. Normal in a sense that these are the most straightforward in terms of a video game functioning correctly, such as a cement factory without an onslaught of overwhelming obstacles or traps. Though, the devs still managed to make things weird. The cement factory enemies? Homeless people. And you shoot them with a sub-machine gun. It gets weirder. This is one of the rare places in the game where you can easily grind for health pick-ups in the form of green energy cans. That's right: you have to mow down dozens upon dozens of homeless people for Mountain Dew beverages just so you can faintly survive the latter stages with as much health and lives as you can get your hands on.

Because the latter stages are atrocious. For a number of reasons. 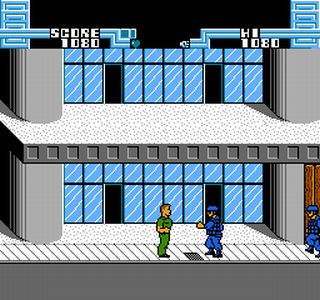 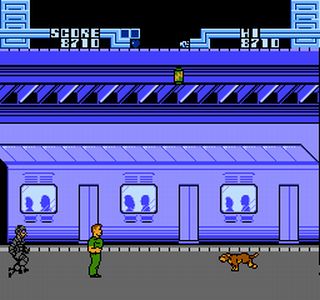 Once you pass an overhead driving segment with unnecessarily stiff controls, the following stage has you platform-jumping in very tight spaces while a bunch of foes and baffling obstacles are thrown at you. Such encounters include construction workers that... throw boomerangs, indestructible women that toss shurikens with semi-tracking movements from windows, and then there's cats that literally drop from the top of the screen, scrambling to the bottom while traveling through parts you have to go through. If you had to fight each enemy one by one, this would be fine, but that's sadly not the case. Unfortunately, this repeats until you reach the end where you have to enter a bar, which you can only do while someone is being tossed out... The act of going through the bar's door to conclude the stage is easily the worst part of this whole area, since the act of entering the door is flimsy. On top of that, the people being thrown out can damage and push you away from the door. Hope you have enough health and lives.

Beyond that is the final stretch, but by the time you reach this portion, you're likely to have so few lives remaining and a withered health bar. Regardless of how well you understand the game, actually completing Total Recall at this point is the equivalent to guessing the correct number in a random number generator. You can try and retry with a warp sequence that takes you to the beginning of the Mars stages, but with every new session, back to back, your perseverance falters. Ideally, the whole thing can be completed in under 30 minutes. "Ideally." There's so much buffoonery to deal with in that time span that it becomes exhausting; the sheer thought of repeating these stages after losing can cause actual fatigue.

So here's a better idea: just watch the 1990 movie. It may last three times longer than the game, but at least you'll be entertained and free of any stress.

If you enjoyed this Total Recall review, you're encouraged to discuss it with the author and with other members of the site's community. If you don't already have an HonestGamers account, you can sign up for one in a snap. Thank you for reading!

© 1998-2021 HonestGamers
None of the material contained within this site may be reproduced in any conceivable fashion without permission from the author(s) of said material. This site is not sponsored or endorsed by Nintendo, Sega, Sony, Microsoft, or any other such party. Total Recall is a registered trademark of its copyright holder. This site makes no claim to Total Recall, its characters, screenshots, artwork, music, or any intellectual property contained within. Opinions expressed on this site do not necessarily represent the opinion of site staff or sponsors. Staff and freelance reviews are typically written based on time spent with a retail review copy or review key for the game that is provided by its publisher.