The works of H.P. Lovecraft and the concept of cosmic horror have always fascinated me. The premise of contagious madness and demonic elder gods ripping apart the world bit by bit is a fantastically dark one, and The Sinking City sees fit to explore this lesser taken road.

The game's setting is Oakmont, Massachusetts, a city plagued by heavy rain and flooding, so much so that it is only accessible by boat. You assume the role of Charles Reed, a navy vet turned private investigator who hopes that by visiting the town, he will find the source of his nightmarish visions and the madness that has been spreading through the region. Your investigation will introduce you to a number shady characters living across multiple city districts, who are willing to help you for a price. As you assist the locals with their agendas, they will return the favor. Bit by bit, the source of the spreading insanity is revealed. 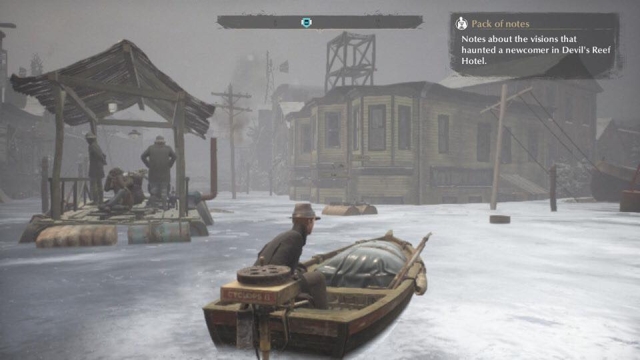 Characters you encounter, as well as the one you play, are generally believable thanks in part to solid delivery by the vocal talent. Members of the apish Throgmorton family are stern but not forceful in their delivery, while those with Innsmouth syndrome have what could almost be called a gurgle at the end of their words (which fits their aquatic appearance). There are a few stale performances in the mix, but most suit the characters well, whether those individuals are strong-willed, stoic or manipulative. Sadly, the rest of the audio doesn't fair quite so well; the music, while appropriately atmospheric, is mostly forgettable.

The Sinking City is generally impressive on the Switch, though not without unfortunate limitations. The world you explore is quite large, the textures solid and rather detailed. You get a home console experience on a handheld. There is a sense of emptiness in the city because of it's size, however. Most of the buildings are boarded off or otherwise inaccessible, and a lot of the ones you can enter share the same assets. Some streets are barricaded off altogether, occasionally making you either pass through a wylebeast-infested area, or use a boat to cross a flooded city expanse. The former activity eats up your precious supplies, while the latter hinders the overall pacing. 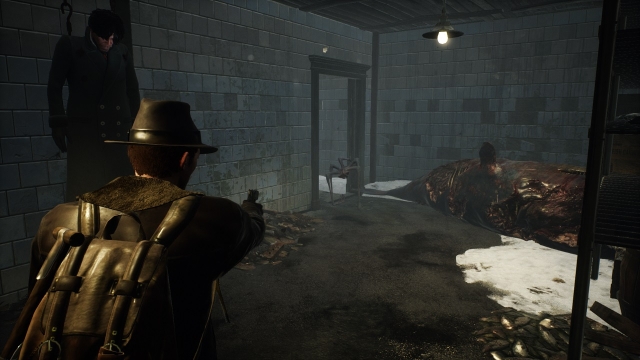 There are also a few performance hiccups that hold back the experience. Some texture pop-in is present, most notably when approaching doors to those buildings you can actually enter. As I played, I found that if there was little of note waiting within the building, I could seamlessly enter, collect a few items and then exit to continue exploring the sprawling city. However, if there were unique or different textures, or a handful of NPC's waiting within the structure, the game would freeze for a moment before the door opened and textures would load individually. Had the city been a bit smaller, not only would it have felt more lively and immersive as a whole, but the texture and loading issues I encountered might have been diminished.

While exploring Oakmont, you will encounter inhabitants of varying levels of sanity, as well as the aforementioned wylebeasts. Though somewhat limited in variety considering the scope of the game, these monsters would all make fitting additions to a Silent Hill or Resident Evil title. Encountering swarms of wylebeasts negatively affects your mental stability, causing opaque images to obscure your vision and shadowy creatures to appear around you. Infested areas are very dangerous indeed. Combat (and general animation, for that matter) is somewhat stiff, with a vertical melee attack that can be difficult to line up effectively. Gun play fairs a bit better, but by default (at least in handheld mode), aiming your firearms is controlled using the right analog stick and your physical motions in tandem. This makes hitting smaller enemies slightly more frustrating, since the Switch does a capable job of picking up even subtle movements you might not have meant to make. Thankfully, this can be turned off in the Settings menu. 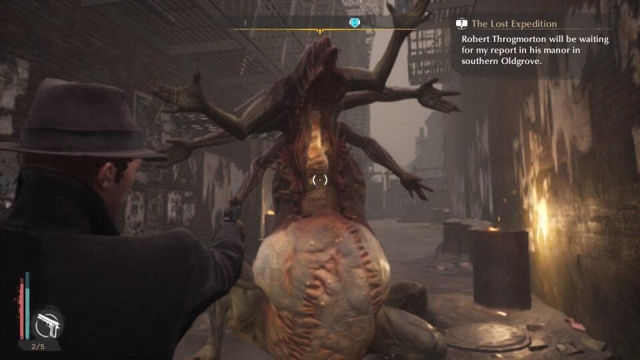 A less quickly resolved issue is the fact that supplies are scarce. There also is a limit to how many of each item you can carry, which means every shot counts. This increases any irritation you might feel due to an unsatisfactory control scheme. Fortunately, discovering new locations, defeating enemies or finishing side quests grants you experience points you can use to to expand your health meter and improve your weapon damage and loading speed, as well as to increase your inventory capacity. Resolving various situations and problems for the local residents generally rewards you with useful supplies. First-aid kits, various ammunition, traps and crafting components for the aforementioned items are all on offer, plus you can scavenge some of the same things around the city.

Over the course of your journey, you'll often find yourself searching various public records to track down a person or place involved in the crimes you must investigate. Going through police files or checking the newspaper archive becomes a common chore, and those activities serve as rather dull brain teasers. A mini-game that forced me to match a specific case element with three relevant search criteria stumped me a number of times. Rather than figuring out the correct combination, more times than not I simply stumbled across the solution by accident, which robbed my success of the intended satisfaction. Two more engaging aspects of your sleuthing efforts are your supernatural sense, known as the Mind's Eye, which lets you see past actions of suspects and witnesses through involved objects, and Retrocognition, which you can use to piece together the order events at a crime scene. Many cases are not clear cut, with each involved party having ulterior motives. For example, one case involves a break-in at an organized food bank where nothing appears to have been stolen. You discover that the security member at the food bank is terrified of the organization leader, and that the person who broke in was a former lover of said leader and attempted to poison the food supply. They believe those in charge at the food back are attempting to recruit and indoctrinate citizens, in the hopes of growing the number of individuals with Innsmouth syndrome. Your investigations in such cases tend to provide evidence in favor of both sides of an issue. That leaves you to determine who involved is taking, or will take, the actions that work on behalf of the greater good. The outcomes of many cases lead to variations in the overarching story. 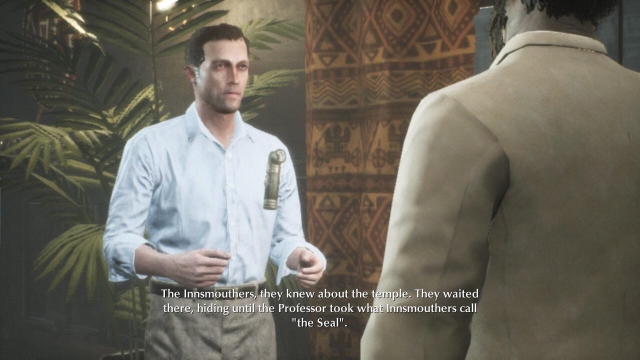 The Sinking City presents environments that feel a bit too expansive for my tastes, and some elements of the frequent investigations become dull. However, the game does have a number of things going for it. There are some fitting design choices that make the atmosphere feel true to the Lovecraftian source material, and the protagonist's added otherworldly senses spice up the flow of events. The end result may be a somewhat flawed experience, but it's one that should entertain those seeking a pinch of supernatural and a dash of horror with their mystery.

© 1998-2022 HonestGamers
None of the material contained within this site may be reproduced in any conceivable fashion without permission from the author(s) of said material. This site is not sponsored or endorsed by Nintendo, Sega, Sony, Microsoft, or any other such party. The Sinking City is a registered trademark of its copyright holder. This site makes no claim to The Sinking City, its characters, screenshots, artwork, music, or any intellectual property contained within. Opinions expressed on this site do not necessarily represent the opinion of site staff or sponsors. Staff and freelance reviews are typically written based on time spent with a retail review copy or review key for the game that is provided by its publisher.