Survive long enough as a video gaming franchise, and youll eventually end up open world. That seems to be the current climate and with Gears 5 representing the sixth instalment in the series (I know; I forgot Judgment was a thing as well), it seems that time has come. Kind of. Rather than spending your entire time fighting subterranean lizard men for control of a world filled with waist-high walls, now you sometimes flit through large maps, hunting down your objectives or stumbling across locations offering small side missions. I guess the side missions are fun distractions, often providing you with one big set-piece battle and rewarding you with special abilities you can upgrade the creepy semi-cloaked robot thats always watching you with. But it doesnt seem an equivalent exchange when factored against all that aimless wandering. I dont want to oversell the open world claim; these areas are self-contained maps that are far from gigantic, and any locations of interest are literally signposted with a massive flag that should stop you from strolling past without noticing. I think its biggest issue is how it highlights the worrying notion that Gears has seemed to have run out of ideas.

Its pretty damning that a series that once pioneered cover-based shooting thats now running on creative fumes. In truth, its probably still suffering from the fact that the original trilogy wrapped itself up quite tightly, giving very few loose threads to tug on. Back then, you were fighting two wars, one against the locust horde and the other against their heavily mutated and glowy usurpers, the lambent. Battles were waged, wars were won, and both races were eradicated on a conclusion everyone was happy with. Except not. With the trilogy cycle complete, Microsoft purchased the game rights from the original developer, Epic Games, and the mantle was taken up by in-house developer, Coalition. The locust was resurrected under a different name (theyre The Swarm, now) and, well, little else. 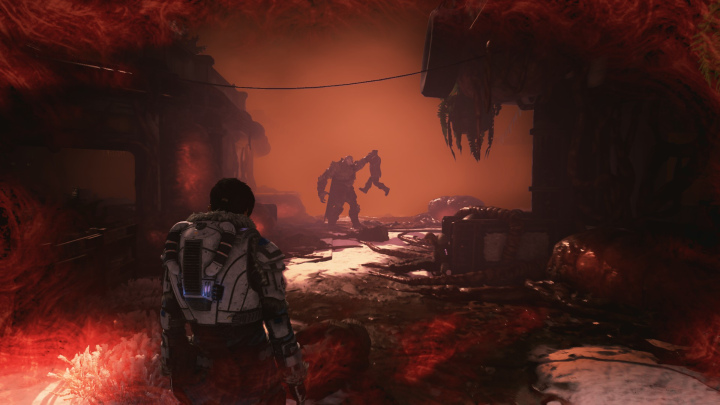 Theres a lot of old ground being retread. Despite being billed as an evolution of sorts from the locust of old, the swarm are a good old fashioned pallet swap of the most generic grunts with a lot of the more unique, interesting foes left by the wayside. There are a few new monsters scattered about, but nothing like the old horde of wretches, tickers, corpsers, bloodmounts and the like. The only advantage the swarm have over the locust is their ability to steal technology more competently. Some of the bigger threats sport hijacked guardian robots that encase them in a pesky shield. They also now have the ability to corrupt friendly droids and turn them against you. This just means you have yet another universal bipedal foe to deal with.

It feels a little harsh putting the boots into Gears 5 for not living up to the legacy that came before it but, at the same time, I can still vividly remember the big stand out set pieces from back when. Raams menacing arrival at the start of Gears 1 and the subsequent game of hide-and-seek with an enraged berserker. Or dancing around the razor rain in Gears 2. Its unfair to suggest that the big set piece fights in Gears 5 arent enjoyable  they are -- but nothing stands out in the same way. Dragged out, brilliantly exhausting wars of attrition still exist, but theyre sporadically placed in between sci-fi sled navigation and a particularly clumsy and rage-filled escort mission. The sad reality is that, only a few weeks after completing the game, nothing really stands out in my memory. 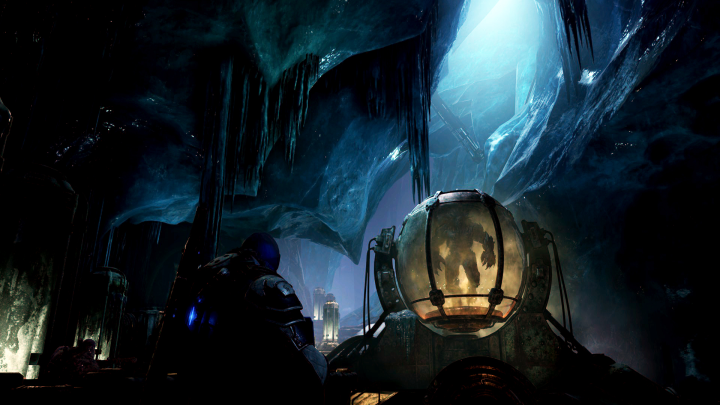 Some of this is directly down to the new diet open world approach. Coalition is pretty eager for you to explore it, hiding all the collectables in dusty corners, but not limiting it to interesting paraphernalia; theres now stuff you really need to be seeking out that allows you to flesh out your robot helpers shiny new tech tree. Which leads to an odd disconnect at times. Early in the game, youre forced to help defend an outsider village under siege from a Swarm raiding party. People are dying all around you. I mean, a lot of people, and theres a desperate rush to get to the edge of town to try and cut off the swarms advance. Only, thats not what Gears actually wants you to do. I mean, sure, your desperate teammates beg you to stop searching that out of the way workshop and join the battle, and the concerto of gurgling death rattles as more and more innocents are mindlessly slaughtered might foster a sense of anxiety, but if you dont find those fuse boxes now, theyre gone forever. A lacking robot helper means an underpowered team.

It does rob the game of a lot of urgency, which was something the series used to have in gore-filled buckets. You have to get to the front lines or all will be lost! But first, check out that dimly-lit fuse box. Fight your way through the enemy flank and plant that beacon, or else everyone you know and love will be chainsawed to death! But make sure you thoroughly investigate those corridors splintering away from your main objective first. Its sad to see something once as innovative as Gears stumble in its brave attempts at one more trilogy; perhaps it would have been better doubling down of bubbles of electric firefights, concentrating more on achieving bottled doomsday in between casual Carmine homicides. But thats just not how modern video games work; linear bad, sprawling open world good. Aside from when it isnt.

If you enjoyed this Gears 5 review, you're encouraged to discuss it with the author and with other members of the site's community. If you don't already have an HonestGamers account, you can sign up for one in a snap. Thank you for reading!

© 1998-2021 HonestGamers
None of the material contained within this site may be reproduced in any conceivable fashion without permission from the author(s) of said material. This site is not sponsored or endorsed by Nintendo, Sega, Sony, Microsoft, or any other such party. Gears 5 is a registered trademark of its copyright holder. This site makes no claim to Gears 5, its characters, screenshots, artwork, music, or any intellectual property contained within. Opinions expressed on this site do not necessarily represent the opinion of site staff or sponsors. Staff and freelance reviews are typically written based on time spent with a retail review copy or review key for the game that is provided by its publisher.