Thunder Paw's Steam store page tells the tale of a young, carefree, anthropomorphic German Shepherd named Thunder. When we first see him, he is frolicking in in a sunny meadow near his home, clad in polka dot swim trunks, chasing a ball with no cares at all in the world. But then his parents are kidnapped by a mysterious party, and the next screenshot is of Thunder, his swim trunks swapped for full army fatigues, his beach ball ditched for an assault rifle. That... escalated quickly.

We are told precious little else. Outside of the letter that the kidnapper was thoughtful enough to leave behind, we aren't told why an explosion(!) preceded the event. We aren't told why someone would want Thunder's mom and dad in the first place -- perhaps a ransom? Is the Paw family wealthy? And we're not told when Thunder was enrolled in My First Spec Ops Training (because he must have been), but it doesn't matter. There are a lot of gun-toting animal commandos to kill before this family is reunited. Let's get to it.

The bare bones premise appropriately prepares us for a bare bones experience: Thunder Paw is the most basic, rudimentary 2D run and gun shooter you'll likely play. It's an old school side-scroller, so for retrogamers like me, that fact puts points on the board from the get-go. As with Contra and others of its ilk, you'll want to run to the right and never stop shooting. Every so often, a boss will present itself and these guys boast large health meters and tricky moves, so happening upon them is always a present surprise, a departure from the otherwise generally tame. 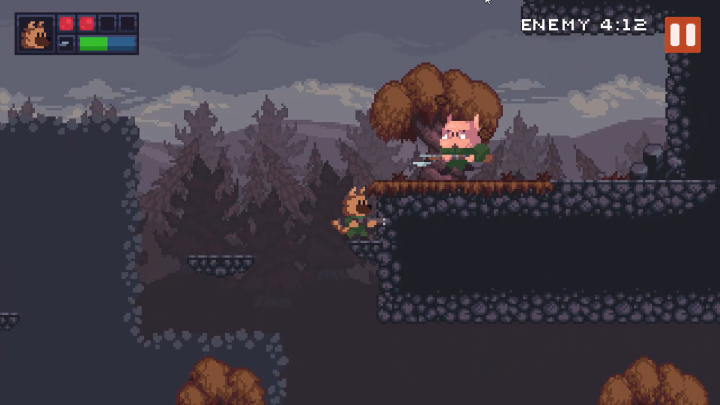 To be fair, Thunder Paw is a decent indie effort, which looks to have been made by a single Russian dude (I have no idea if he's single, actually). The aesthetic reminds me of Snow Fall, another side-scrolling shooter released last year, also by a Russian team of one. Where that game had your hero running around crafting guns from spare parts, this one has you seeking out hidden guns and upgrading them.

Unfortunately, there's nothing very satisfying or cool about any of the guns; in fact, it took me awhile to realize they weren't all the same weapon. But! There is something unique about how they all work, and it isn't a good thing. When Thunder is blasting away, there is significant recoil that pushes him back. Early on, this will be a mere curiosity, and not an issue. But in later levels, there are some tricky sequences involving tiny platforms and enemies setting up shop on the platforms of their choosing. The animal militia members are bullet sponges to a man, so you'll have to send a stream of projectiles into a teddy bear's face -- but not so steady a stream that you push yourself backwards and downwards into the lava that rages beneath. I actually killed myself more times than I would like to admit, and certainly more times than any non-boss enemy killed me, by recoiling myself (yes, that's a thing now) to a life-ending fall.

My failures were underscored by bass heavy techno tunes which are surprisingly good, but just aren't memorable when all is said and done. Thunder Paw's graphics are very comic book colorful, but also very uninspired. I mean, you've got your red lava level and your blue ice level, and so on. It's all very serviceable, but I would have liked it if there was something interesting happening in the background of any of the stages, so our heroic exploits could play out in front of Pyramids, or a cityscape in parallax, or something. Nope. We do get multi-level scrolling going on, but only involving a given level's colour 'theme' and cloud formations. It's like Windows '95 desktop themes and their matchy-matchy cascading boxes all over again. 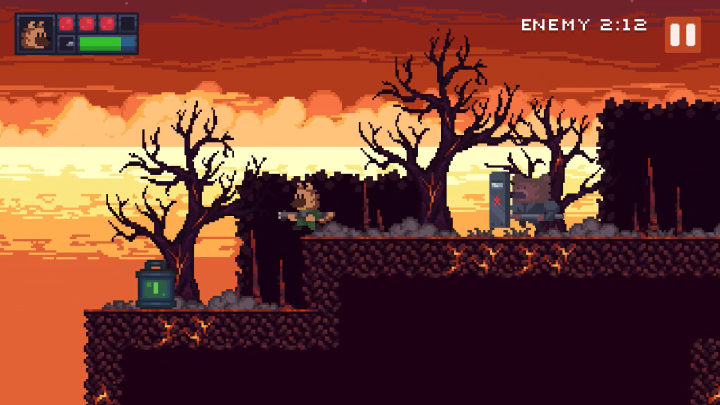 Outside of the recoiling, Thunder Paw's missions themselves are easy and straightforward. Progress is predicated upon Thunder eliminating all foes in a given level, so that he may proceed to the next. The game provides a counter telling you how many enemies are dead and how many remain. Beat enough levels and you are on to that world's boss. Again, the five bosses are surprisingly challenging; thankfully, they bring some creativity as well as heat to the table.

The last boss in particular is a son of a bitch; meeting him evokes Revenge of Shinobi's final confrontation. I remember how everyone hated that encounter: not only were you tasked with killing the hard-to-kill bad guy, you had to periodically direct your fire at a trap threatening to kill your loved one (here, loved ones). This game's bad guy has your parents in water tanks! Because he's Jigsaw from the Saw movies?! So it's possible to 'beat the game' by killing the final boss, only to watch your parents die. Serious bummer.

Torture and family trauma aside, Thunder Paw is a decent old school distraction. If you can get it on the cheap, which you should have no problems doing, it's worth a look. There are better run-and-gun efforts out there, so you'll have to have worked your way down a long list of superior games in the genre before this one gives you paws. Once it does, expect a rote shooter-platformer with annoying gun recoil, a few cool ideas and a modicum of old school charm.

If you enjoyed this Thunder Paw review, you're encouraged to discuss it with the author and with other members of the site's community. If you don't already have an HonestGamers account, you can sign up for one in a snap. Thank you for reading!

© 1998-2021 HonestGamers
None of the material contained within this site may be reproduced in any conceivable fashion without permission from the author(s) of said material. This site is not sponsored or endorsed by Nintendo, Sega, Sony, Microsoft, or any other such party. Thunder Paw is a registered trademark of its copyright holder. This site makes no claim to Thunder Paw, its characters, screenshots, artwork, music, or any intellectual property contained within. Opinions expressed on this site do not necessarily represent the opinion of site staff or sponsors. Staff and freelance reviews are typically written based on time spent with a retail review copy or review key for the game that is provided by its publisher.