Contra has always been irresistible for two reasons: 1. its brand of run-and-gun manages to be immediately accessible and crushingly difficult at the same time, and 2. you can call for back up. Contra's creators, Konami, released Castlevania Anniversary Collection, not too long ago. While that compilation felt incomplete and like a missed opportunity, it's still an undeniable collection of eight unique titles -- most of them classic. Unfortunately, Contra Anniversary Collection doesn't have that kind of breathing room. Despite what the game materials tell you, there aren't really ten games here. There are five truly unique adventures: the original Contra, its sequel Super C, the Game Boy entry titled Operation C, and the 16-bit main events, subtitled The Alien Wars and Hard Corps.

Here comes the part where I whine about what isn't here, because of course that matters. I appreciate that it might have been difficult to smoothly emulate and include the PS1 and PS2 titles of wildly varying style and quality, but where is the DS-hosted Contra 4? And what about Contra Rebirth, whose inclusion would have been the greatest sort of love letter to fans of the canon, given that it is no longer available anywhere with the death of WiiWare? We can only hope that those titles end up coming to us on a subsequent collection and weren't just thoughtlessly (or lazily!) left off this one. 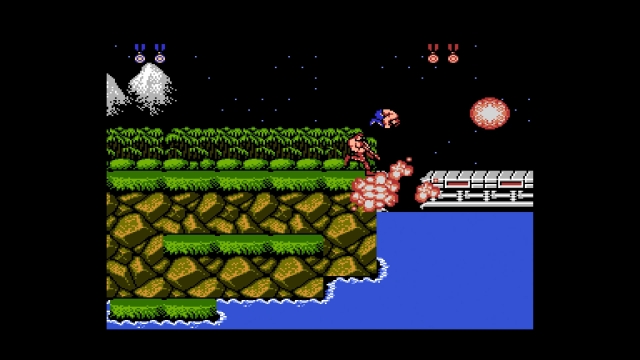 The exclusion of those games wouldn't hurt so much, were it not for the inclusion of multiple versions of the same games. To wit: there are three iterations of the first game to choose from. Three! Arcade Contra. NES Contra. Famicom Contra. The Famicom, if you haven't been paying attention, is the Japanese version of the NES, and so that version is almost exactly the same game. The arcade version is a little bit different, yes, but thats not a good thing: despite having the same general levels and sights and sounds, it is a wholly inferior experience.

Lets not get it twisted -- Contra is definitely a classic. In my view, it's still the best run-and-gun game ever made. (And it was released how many years ago??) But that doesn't mean that I needed to play the Japanese version, which as far as I can tell has small cinematic interludes between levels (in Japanese), and a sweet undulating background effect in the last level, differentiating it from its North American sibling -- surely not enough to encourage a second trip through a nearly identical hell. And as I say, the arcade version has a different graphical style which is more detailed and features more realistic colours, yet is somehow quite a bit less appealing.

The second proper entry is the direct sequel, Super C, or Super Contra, as the arcade version is more logically named. Konami chose to once again break up the horizontal shooting levels, but this time with overhead levels to contrast the behind-the-back shooting gallery sequences from the first game. While I actually preferred the overhead levels, the original is still the better, more memorable game by a comfortable margin -- Super C seems to have ramped up the cheapness factor, installing plenty of sneaky enemy ambushes which are pretty annoying. 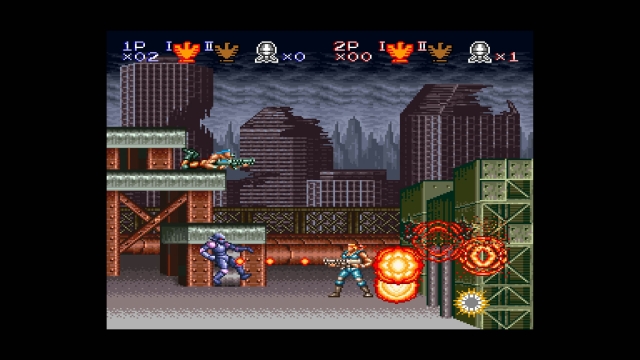 Interestingly enough, Operation C, the first handheld game in the series, is surprisingly playable. It copies the Super C blueprint from the top-down stages to its title, and gives us pretty fun remixes of our favorite tunes. It starts off as a fairly easy, breezy, stripped down and monochromatic approximation of the real thing, but it shows its teeth from the second-to-last boss onwards. I dont have to imagine how hard this would have been playing on the actual Game Boy hardware, because I somehow fought through it in its day. Lets just say its far better to play it on the big screen without having to squint, and while thanking the heavens for save state spamming later in the proceedings.

Finally, we arrive at what most would consider the main selling points of the collection, the pair of 16-bit heavyweights. As was the case with its Castlevania cousins, the SNES game -- The Alien Wars -- comes loaded for bear with a bombastic, superior soundtrack and Mode 7 effects galore, while the Genesis-hosted Hard Corps feels like an offshoot, with selectable characters and branching paths and a darker, more hardcore challenge to grapple with. The Alien Wars feels about as difficult as the NES titles, but if you haven't played Hard Corps before, you are going to get your ass kicked.

Thankfully, Contra has never been simply about reflexes; memorization and accordingly, planning, (read: knowing where to stand and what weapon to use) must be part of your winning approach -- especially in the relentless Hard Corps. And if were being honest, save state spamming will prove an indispensable tool to newcomers and compromised, old school gamers alike. 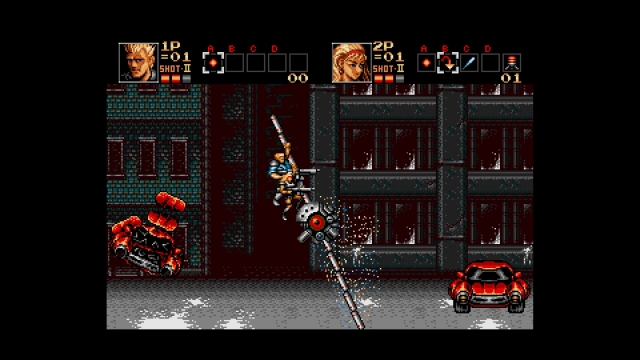 The Alien Wars rather infamously 'boasted' overhead levels which haven't necessarily aged well. They always seemed to be an excuse to show off Mode 7 scaling and rotation effects more than they were examples of sound game design, but theyre nowhere as bad as anti-Super NES-cum-Genesis boosters would have you believe. At the very least, they feel like a welcome break from the stress of the horizontal scrolling stages, which are always closed out with memorable boss encounters against gigantic bad guys who simply wont go down easy. Hard Corps offers no such top-down level breathers; the Genesis title offers no respite.

You probably guessed, but naturally, we get more versions of these same games: Probotector and Super Probotector, which were originally released for the Mega Drive and Super Famicom respectively, and about which, the less said, the better. Not because they're bad, of course, but because they're the same, only they use the horrible names they were christened with for their European releases.

M2 has handled the emulation well enough with Contra Anniversary Collection; I don't have any major concerns with the sights and sounds being authentic, although in keeping with previous M2 compilations, we are provided just the one save state per game and the inability to rebind controls also made the trip. These are still annoying limitations, but in the end, not ones that severely harm the package. No, as is often the case, the main failing here is down to the missing games. Essentially, we have a pair of 8-bit classics, a colourless Game Boy game, and two 16-bit thrill rides. In fairness, thats probably close to being worth the price of admission. But then, the inclusion of the five different versions that we didn't ask for and didnt want, only serve to drive home the point that while this collection is a good place to legally have a handful of Contra greats together in one package, it could have been so much more.

If you enjoyed this Contra Anniversary Collection review, you're encouraged to discuss it with the author and with other members of the site's community. If you don't already have an HonestGamers account, you can sign up for one in a snap. Thank you for reading!

© 1998 - 2022 HonestGamers
None of the material contained within this site may be reproduced in any conceivable fashion without permission from the author(s) of said material. This site is not sponsored or endorsed by Nintendo, Sega, Sony, Microsoft, or any other such party. Contra Anniversary Collection is a registered trademark of its copyright holder. This site makes no claim to Contra Anniversary Collection, its characters, screenshots, artwork, music, or any intellectual property contained within. Opinions expressed on this site do not necessarily represent the opinion of site staff or sponsors. Staff and freelance reviews are typically written based on time spent with a retail review copy or review key for the game that is provided by its publisher.