Hello, said Tiny Metal: Full Metal Rumble. Im very clearly Advance Wars dressed up in pseudo 3D. Id be ever so grateful if you didnt tell Nintendo about this. They get quite angry about this sort of thing, and I dont want to go to the room where they send all the other games they sometimes feel kinda look like games they make. I dont have much of a case, you see. I have a campaign which is more or less a tutorial to get you in shape for multiplayer matches, and I have Commanding Officers that favour certain unit types that also have CO powers. I also have maps littered with city blocks and factories and airports. Ive got allllllll the same vehicle types, too! Oh, also, theres a war room where you can buy extra map packs with funds you can grind out by blowing other people up. Gosh, Id be in quite the jam if they ever found... Whats this? A Switch port, you say? Huh. Not to worry; thanks for your time!

So, I quite liked Advance Wars, which remains the only GBA game Ive ever owned to annoyingly lose its battery power and destroy my bazillion hours of progress, so it would stand to reason that I would like Tiny Metal. And I do. Id end the review there if I thought I could get away with it, but I guess more padding is called for; Ill just assume you, faceless reader, never played Advance Wars. Yes, that should eat up a few hundred words.

It's turn-based strategy time! You have this little map, right? You own perhaps a small corner of it and a handful of buildings. Theres an HQ that, if the enemy takes, you lose, as well as a factory of sorts which you use to produce your various means of war. Sometimes, instead, theyre airports or navel ports, which let you make similar weapons, only ones that float or fly better. You also have city blocks, which, if you own them, grant you X amount of money each turn which you need to keep your factories turning. The idea is to spread across the map, taking over as much of it as you can while fending off at least one opposition force who is trying their best to do likewise. So, you can take over cities and earn more money for bigger weapons, or take over new factories allowing you to pump out a second funnel of tanks, often significantly closer to the enemy base than they might like. But its balanced; you cant just drive an APC atop a city block and immediately demand your weekly tax return; they have to be taken over by your weakest unit -- foot soldiers. This creates the fundamental dynamic of having to have enough big guns to protect your squishy humans while they go about forcefully liberating the shit out of everything. 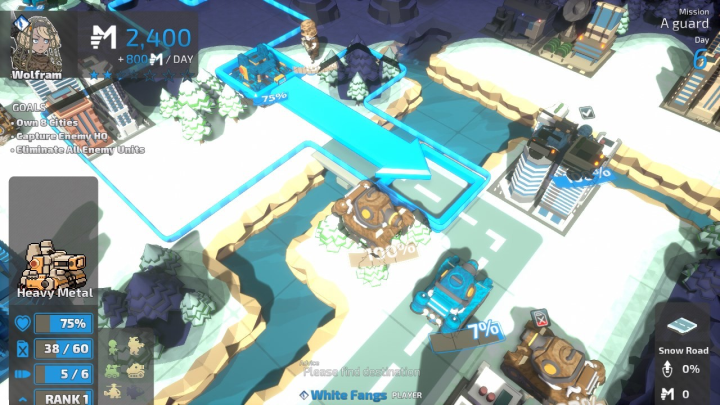 Tiny Metal doesnt do boats, because screw you the ocean, but sticks to all that other stuff religiously. And, I guess, that would be enough for the sizeable amount of peeps out there with an AW itch to scratch; kill all the things, buy all the new maps, and make use of the appreciated skirmish options that let you go online and backdoor random strangers HQs to giggle at the rage-fuelled fallout. But its not content with that; it still wants to do its own thing.

To be fair, its not the first Tiny Metal game (the Full Metal Rumble bit might have been a clue), so its had its chance to improve on its own heavily-borrowed formula. The first time around managed to fall a few steps behind the Advance Wars concept, dropping things like CO powers and the ability to merge disheveled units together into something less likely to be of zero use to anyone. But it also tries to go beyond that.

There are new units to pick through, like the mech suits that give you the mobility of an infantry unit with the strength of a tank. Those arent awful. But it also goes some way into introducing its own mechanics. For example, you can now take over communication relays that let you call in unique hero units with special perks and the ability to keep all the XP theyve earnt forever. Oh, also, your units gain XP now, which puts even more emphasis on trying to keep older units alive and not just wheeling their broken carcasses out to act as distractions or bait. But youll still do that, anyway. You also have different options on how you go about shooting all the things. For example, you can now pick an assault option to do slightly neutered attack damage in exchange for pushing an enemy unit a tile backwards, which is perfect for halting anyones efforts in taking over buildings. 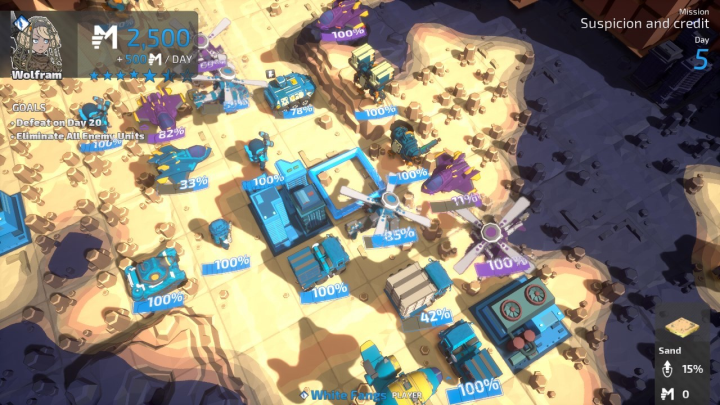 Theres also a new focus command, which lets you stack attacks against a single target without forcing you to pick at it, unit by unit, and incur more counter attack damage then you ideally want to suffer. It means you can take down that jeep with your wounded mech and half a tank by using their combined firepower to destroy or significantly damage it before it has the chance to respond. Kind of like overwatch in X-COM, without the near obligatory chances of completely fluffing that 89% chance to hit. Again.

It even makes a play at being replayable by giving you a trio of sub goals to complete, like producing only riflemen from your factories, or never losing a unit to enemy counter attacks. It means more funds to buy more maps or more BGM to play on the jukebox. Theres enough to grind towards, which helps keep your wars relevant. I mean, youre certainly not going to keep trudging forward to discover the next gripping plot twist or because youve grown super attached to one of the COs. Efforts are made, but they dont really work and, actually, thats okay. No one really cared about Max borderline bullying Andy nonstop in Advance Wars either. It isnt really the point.

I started this review really weird. Im not super sure how Im going to end it. I guess by saying Im glad Nintendo's army of lawyers were too busy stomping on a game that looked a little too much like Metroid and this one got a chance to grow. Where it got its inspiration from is shockingly clear, but its, ahem, advanced enough to plot its own wars.

End on awful pun, slip out the fire escape amidst the groaning. Thats what Ill do.

If you enjoyed this Tiny Metal: Full Metal Rumble review, you're encouraged to discuss it with the author and with other members of the site's community. If you don't already have an HonestGamers account, you can sign up for one in a snap. Thank you for reading!

© 1998 - 2023 HonestGamers
None of the material contained within this site may be reproduced in any conceivable fashion without permission from the author(s) of said material. This site is not sponsored or endorsed by Nintendo, Sega, Sony, Microsoft, or any other such party. Tiny Metal: Full Metal Rumble is a registered trademark of its copyright holder. This site makes no claim to Tiny Metal: Full Metal Rumble, its characters, screenshots, artwork, music, or any intellectual property contained within. Opinions expressed on this site do not necessarily represent the opinion of site staff or sponsors. Staff and freelance reviews are typically written based on time spent with a retail review copy or review key for the game that is provided by its publisher.