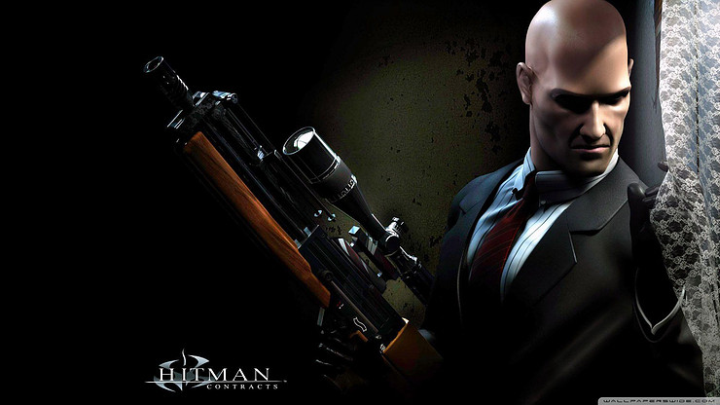 Developed by IO-Interactive and published by Eidos Interactive in 2004. Available on Steam/GOG, Xbox, PlayStation 3, PlayStation 2, Xbox 360 (all non-HD) as well as Xbox One and PS4 (HD versions.)

Of all the games before the success of Blood Money, Hitman: Contracts may not only be the most approachable entry from the classic series, but it also may be the most straightforward in its convoluted mess of a plot. Considering how unbelievably botched was the first game and how questionably broken was its sequel, the state of Contracts as a playable game as well as a modern Hitman entry is an accomplishment in of itself. While this game may play very similar to Silent Assassin, there are enough fine touches to make the engine feel more distinguished from its predecessors, although you can certainly use the same exploits known to the Glacier engine from before.

Unfortunately, as great as Contracts is to play, its reputation is somewhat tarnished by its past. All too often is this game described as a lazy remaster--in an age before remasters were commonplace--of Codename 47 without the inclusion of every level. This statement is somewhat true; however, if you have read my review on Codename 47 (or played the game lately,) then youll probably be thankful there arent certain travesties like the jaguar offering mission or the glitched out fiber wire mechanics that made using it almost impossible. The levels that were chosen are some of the better maps, and they are redesigned to a more modern experience. 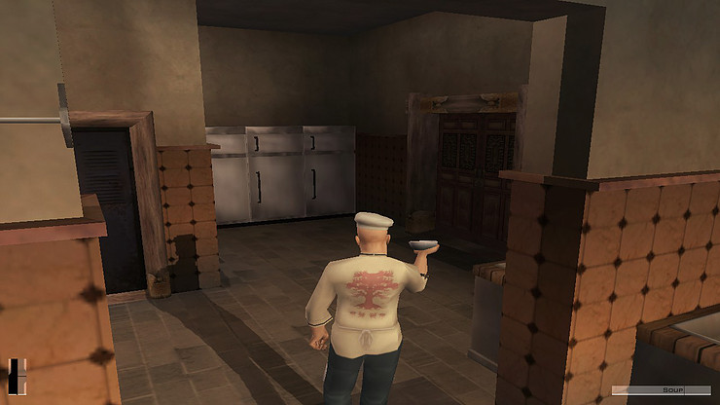 Did someone order déjà vu?

While I would have liked more classic or original levels for Contracts, the ones that were chosen are some of the better memories from the first game, revitalized by the modern Glacier engine as well as IO-Interactives years of experience. Or to describe this game in another way, Hitman: Contracts is like a Greatest Hits collection from Agent 47s career where only the good times are cherished, and all the troubles from the past are forgotten.

Strip Away All the Fat, and What is Left?

Unlike my previous reviews of the Hitman series, Contracts didnt enlighten me on older stealth games except helping me to recognize when these mechanics become so simplified that they can ruin the experience for die-hards. Had I not played this series from the start of original series as well as the newest Hitman games, I might have brushed off these problems from sheer ignorance. As a result, if you choose Contracts as your entry-point, then you will probably find the experience more enjoyable than suffering from the hardships of the past. 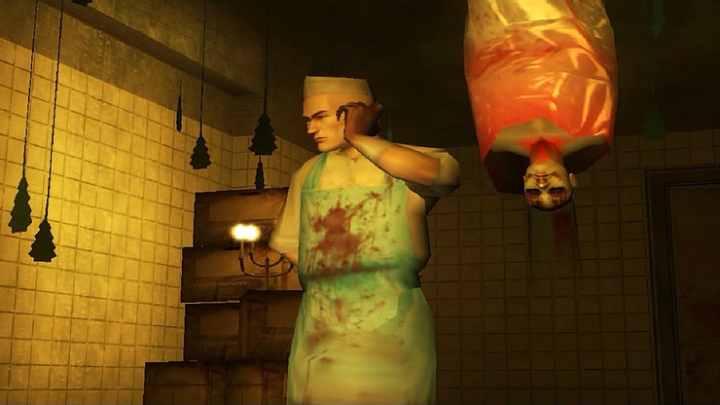 You might consider these statements damning indictments for the quality of the gameplay, but if you want to figure out how to improve something, then you have to strip away all the unwanted fat in order to pack in more substance. For example, the disguise and the stealth systems have been completely overhauled to focus more on using multiple disguises to counter new obstacles. This mechanic was always a part of the original games, but the implementation better resembles what you would later see from Blood Money onwards. Unfortunately, Contracts lacks the ability for people who wear similar outfits to identify you as to balance out this mechanic, so you can often find one outfit that counters everyones suspicions--and for certain Silent Assassin ratings, you have to use them. Conversely, if you wear other outfits, then you will automatically raise the enemies suspicions without much leeway. Out of these changes, these two are perhaps the most frustrating for new and old players because the simplified disguises dilute the satisfaction of trying various solutions from most missions. 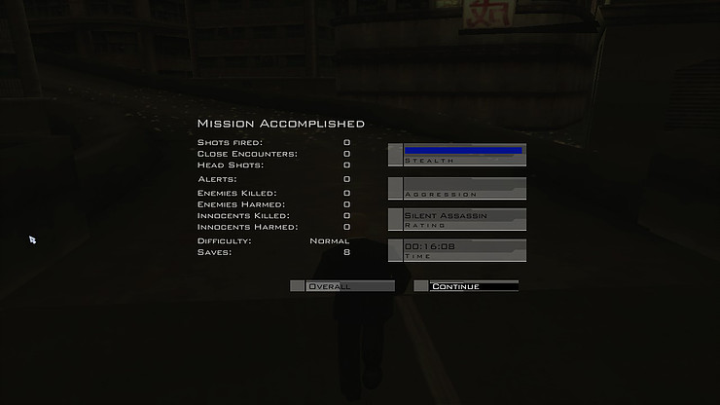 A Hitman game so easy I often got Silent Assassin ratings on my first trywith under ten saves per mission.

To Contracts' credit, most missions display as much, if not sometimes more, freedom than the previous installments. Like the prior games, the deciding factor ultimately comes down to the mission structure and the objectives you have to complete. Unlike these past games, however, there arent any missions to pad out the game nor to distract you from the simplicity of its contracts. Every mission in Contracts is a hit in one form or another; there are no infiltration missions that automatically give you game overs if detected; there are no forced combat encounters; and there are no obtuse goals outside of retrieving certain items. In spite of what has been lost from before, this more focused design works in the series favor as every game after Contracts has taken this approach to mission design while focusing more so on its sandbox and social mechanics, which are both lacking in this entry simply due to Contracts inheritance of games too confused by their own design.

Almost everything else about this game from the gunplay, the walking mechanics, the good level-design and the vestiges of its Euro-Jank are all still present in Contracts, but its these finer touches and the overall quality, not quantity, that solidifies this game as the first exceptional Hitman entry. Without the existence of Contracts as an introspection on the series legacy, I do not believe Blood Money would have become nearly as widely successful--but that statement could apply to every Hitman game because IO-Interactive always shakes up their old ideas. So, despite how much the fanbase may dismiss this game as much as the story does for itself, Contracts is a title that deserves playing despite not offering the complete experience that came before.

Storytelling that is Less Than Nothing from Before

One of the more fascinating aspects of the Hitman series, outside of observing the evolution of the core gameplay, is watching IO-Interactive tackle the problem of making an effective narrative. The first game tried to approach the problem by making Agent 47 a mystery to unravel after threading the assigned targets behind the veil of coincidences to his past. Its sequel told even less of a story with the first two-thirds of the missions ignoring the inciting incident of a kidnapped pastor, and the ending only somewhat tried to capture the same cleverness of the original. Contracts, however, manages to tell even less of a narrative than these two other games, which after describing how little there was to tell from these last two entries really puts that statement into perspective. 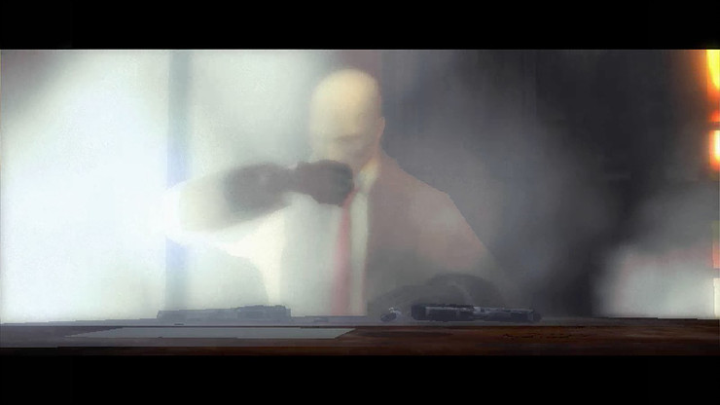 Another average day for 47.

Contracts feels like the (Metal Gear Solid) Ground Zeroes of videogame narratives before that game ever existed; the story comes across less like a complete experience and more so the opening prologue to a more complete tale. (Spoiler: The only difference is that Blood Money actually delivered on a full narrative.) All the cinematics set-up flashbacks to previous contracts with no relation to the present situation; the only exception is the final mission, which has you escaping the police after being targeted by someone. You could easily describe this entire narrative in one sentence: Agent 47 gets fatally injured by someone (or some other agency) who is hunting down the International Contract Agency (ICA,) and, after getting patched up, he escapes before the police take him.

However, like with all previous games, that summary isnt the whole picture of what is going on during these missions. The major difference from prior games is there is so little these sequences add to the overarching story that its not worth any investment for the player. Unlike the previous games that tried to hide the irrelevancy of missions with some clever ruse, there is nothing from these flashbacks that expands the plot. Instead, the game offers little narrative moments from the sandbox that tell a few short stories about your targets or the world to make you somewhat interested. 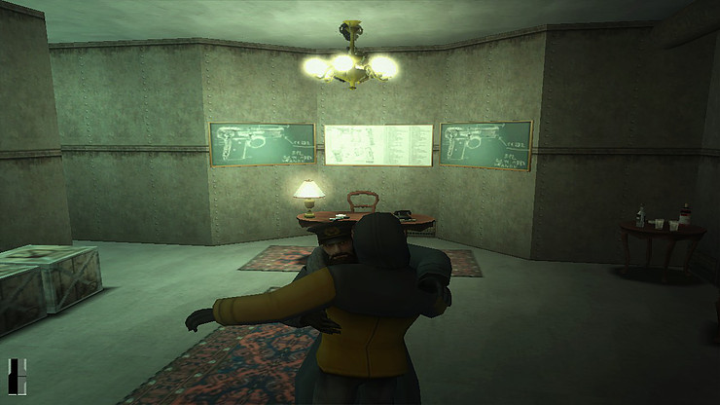 It's far more telling that a hugging a target stands out from the story.

Similar to how the gameplay has removed all the extraneous padding from before, you also might view the narrative as the bare foundations for the future. Even if you accept that interpretation of the story, theres nothing really outstanding to warrant giving the game any praise for that decision. However, every game after Contracts has taken that approach of letting the sandbox tell more complete stories rather than the plot itself, so maybe Contracts does deserve some credit. This situation is one of those cases where any hindsight is blinded by the facts of the time and the unknowns of the future, and any shadows that may have been cast have long been eclipsed from what games came afterwards.

To make all this purple poetry and a long section about a story that tells nothing short, perhaps the reason why so many people say the story and the atmosphere of Contracts is dark isnt because all the missions take place at night; its because there is little substance to find.

A Legacy Born From Nothing to Nothing 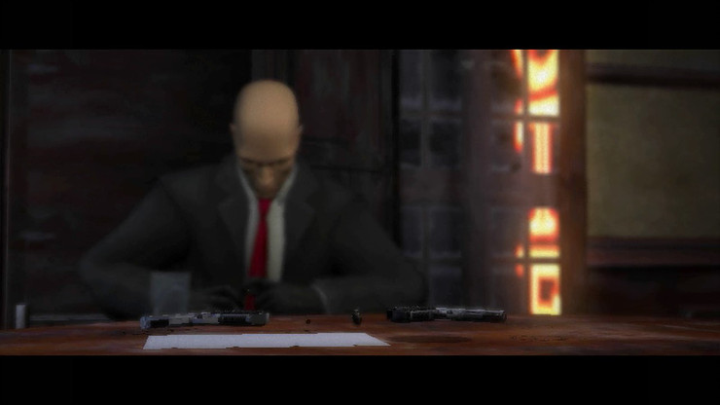 Philosophy in one visual representation.

Like a metaphysical question about existence, the more you play Hitman the more you have to stop and wonder what makes you enjoy these games--clearly it has not been the narrative experience. For the longest time, Ive struggled to explain what it is about Contracts that makes me like it so much when there are more than enough issues with the game to equally admonish it. Perhaps this review has managed to express that dilemma in some shape or form, or maybe, like myth of Sisyphus, Contracts is another excuse to keep playing Hitman against all reason or purpose.

If you enjoyed this Hitman: Contracts review, you're encouraged to discuss it with the author and with other members of the site's community. If you don't already have an HonestGamers account, you can sign up for one in a snap. Thank you for reading!

© 1998-2021 HonestGamers
None of the material contained within this site may be reproduced in any conceivable fashion without permission from the author(s) of said material. This site is not sponsored or endorsed by Nintendo, Sega, Sony, Microsoft, or any other such party. Hitman: Contracts is a registered trademark of its copyright holder. This site makes no claim to Hitman: Contracts, its characters, screenshots, artwork, music, or any intellectual property contained within. Opinions expressed on this site do not necessarily represent the opinion of site staff or sponsors. Staff and freelance reviews are typically written based on time spent with a retail review copy or review key for the game that is provided by its publisher.