Materializing in a cathedral-like building, you, in first-person, start turning pages in a book using the PS4 controller's motion capabilities. Along the way, an unknown voice narrates the book's prologue, going so far as to supply voices for every character introduced. Before long, it transitions into the book's world where you meet one of two protagonists, a young, mischievous mouse seeking adventure within a forest. Shortly after, the mouse, named Quill, stumbles onto an artifact that allows her to see and interact with the other protagonist, the Reader. Who? This being is the actual person reading the book in the cathedral and, in essence, you the player. Interestingly, despite this realization, the game also allows you to control the mouse; basically, Quill moves freely around the environment, jumping and slashing with a sword, while the Reader manipulates specific objects.

Certainly a neat setup for a video game, but as a VR-exclusive title, Moss comes off as a hard sell. This is especially evident when you find out the game looks like a simple platform adventure where you witness the action from a fixed camera position. Now, what are you likely to play in VR first: the aforementioned game or titles where you move around and interact with stuff in a first-person perspective? You didn't spend all that money on VR equipment for something that could be played as a normal PS4 title, right? That's probably the only real problem concerning Moss: convincing people it's a genuinely gratifying virtual reality experience. However, not that far into the game, one quickly realizes how much the devs cared when taking virtual reality's strengths into consideration. 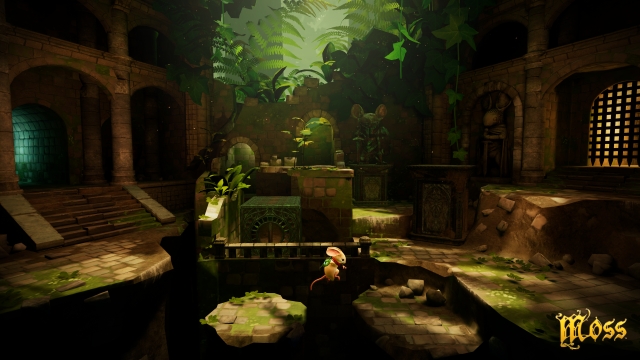 Moss' scenes, whether it be across a forest, foggy swamps, or dungeons, transition from one another like connected rooms. Or, further accentuating its fairy tale vibe, going from one page to the next, since you actually hear a piece of paper turn as the screen fades to black. They're also done in an oldschool fashion similar to PC adventure titles, where each scene displays environments from different viewpoints. In one segment, you're in the middle of a peaceful village of mice, with guards patrolling, someone fishing, and two kids playing with toy swords. You leave the scene by running across a road in the upper right corner of the screen, but when the next scene fades in, you spot Quill running towards the camera from the left middle corner, with the village now in the distance. Some might find this trivial, but it does help bring scope to Moss' world from a fixed perspective.

That's all good and well, but what does this have to do with VR strengths? Well, the devs have taken this classic approach to art direction and made it as if you're feeling this sensation for the first time. Gazing into the world of Moss is like you're peeking into some of the most intricate and interactive dioramas ever created, and you're just barely outside its frame, occasionally tilting your head in and prodding nearby objects. Its vastness is engrossing, to the point where you might actually miss a ton of detail if your eyes are fixated on the main path. In one dungeon room, you can overlook a gladiator statue staring you down from above. Just to the side of said statue is a partially-damaged roof, and if you push your head in just a little bit and tilt, you'll see the forest life farther off.

You also feel the world's depth whenever Quill goes behind objects, constantly forcing you to bend your neck all over for a good look, especially if platform jumping is involved. Sounds like a pain, but it's actually charming, and better yet, structures become transparent if Quill is behind them. Thankfully, these decorative decisions coexist with the game portion of Moss, which is mostly puzzle-based. Quill can only do so much on her own, and usually must rely on the Reader to pull forward huge boxes or take over enemies to force them on buttons. You can often spend some time in a single room controlling bugs, hitting switches, and rotating platforms just to access an exit. While these puzzle solutions won't exactly push the limits of your mind, they do give your hands a workout, especially in situations where you control both protagonists in hazardous environments.

Being this close to a fleshed out world, without actually being within it, actually make you appreciate just how much attention developers put into their work in adventure products. That's not to say titles played on a normal screen, with similar artistic merit, are lesser experiences; Moss just makes you realize how easy it is to take pretty graphics for granted, due to it being the "standard" to achieve. Quill herself, for example, is animated very well and often a joy to watch right down to the smallest details, whether it be simple hops, slick sliding onto higher platforms, and even a cute, downward thrust "belly-flop." She constantly gestures to the Reader, emphasizing the bond between the two throughout the journey, hinting at what to do next or just happy that a puzzle was completed. If you pay close attention, you can even give her high-fives, an endearing ritual that evolves over time.

While it's true that the majority of VR titles are built around a first-person shooter template or its sensibilities, Moss, along with some other games, demonstrates you can do something different from the norm with enough creative spark and motivation. Not only that, but it's also one of the most engaging, absorbing releases in the PSVR's library, short length be damned. Can Moss be played without VR, if the devs decide to give it that option in a future update? Sure. Would it come close to the VR version? No. That close connection with the game will be lost; Moss' soul thrives in virtual reality.

If you enjoyed this Moss review, you're encouraged to discuss it with the author and with other members of the site's community. If you don't already have an HonestGamers account, you can sign up for one in a snap. Thank you for reading!

© 1998-2021 HonestGamers
None of the material contained within this site may be reproduced in any conceivable fashion without permission from the author(s) of said material. This site is not sponsored or endorsed by Nintendo, Sega, Sony, Microsoft, or any other such party. Moss is a registered trademark of its copyright holder. This site makes no claim to Moss, its characters, screenshots, artwork, music, or any intellectual property contained within. Opinions expressed on this site do not necessarily represent the opinion of site staff or sponsors. Staff and freelance reviews are typically written based on time spent with a retail review copy or review key for the game that is provided by its publisher.