Turns out, Ive developed a habit of picking up review assignments that are bloody difficult to explain.

With that in mind, lets talk about Zero Strain. Its a top-down neon-wire shooter with Tron-like graphical stylings, and various MOBA elements. Those are things that dont mix very well, so I should awkwardly mention that its MOBA-ish sensibilities arent present at all in the gameplay, but instead relate to how each character is designed from the ground up. But this is not a MOBA; it is a shooter, so theyre not characters - theyre fighter crafts. Only theyre not even that in Zero Strain; theyre actually constructs. Its all unravelling before Ive even got past the first sodding paragraph.

The MOBA comparisons come from how your constructs offer up their offence. They have a basic attack, which is fine in basic circumstances, but rarely contain the power to put down bigger threats as quickly as you might need to. Constructs also each have a passive ability which synergises with their style of play and, hopefully, helps you make the most of the three special abilities. If youve played a MOBA, such as League of Legends, DOTA or Awesomenauts, this all probably sounds familiar. In such games, you clash against human-controlled opposition and have to rely on your particular skillsets in order to get the upper hand. Only, there, these skills are on a cooldown to stop you spamming them non-stop; you have to hold onto them until its the right moment to strike. Get it wrong, and youre often left defenceless against an almost always fatal counter attack. Zero Strain is very similar to that while, at the same time, being completely different. 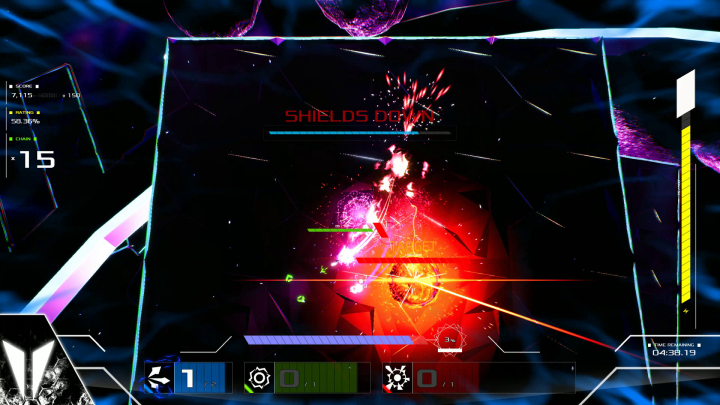 Theres no human versus element, for one; its just you against generated waves. And theres no cooldown for Zeros skills. You can spam them as much as you like, only, you have to earn them first. You do that by staying active, destroying enemy targets with your base weapon, and keenly collecting the scattered power-ups they leave behind in death. So, while you can waste a skill or two on a weak collection of drones, it might mean that, when the bigger threats drop by, you dont have enough firepower to down them. Is this starting to make sense yet? I feel like it should be starting to make sense by now.

One of the reasons this is proving to be a hard game to talk about is, with this unique approach in mind, each construct is purposefully completely different to the last, and they each mean tackling Zeros stages in a completely different manner. Some offer versions of pretty standard shooter tropes: an area-of-effect bomb, or a short ranged but very powerful plasma burst. Others are more adventurous. One gives you the ability to plant energy orbs, which sit benign until triggered into action. Their most common use is to be summoned to the construct, where they will cause heavy damage to any enemy theyre dragged through. Another is to catch them inside an energy wave, where theyll break apart like billiard balls, locking on to the nearest hostile target.

It means that would-be pilots are either giving Zero Strain exactly all of their attention, or that they are seconds from death. Though theres different modes to tackle, most are housed in claustrophobic arenas that will offer up damage should you accidentally stray outside their walls. Theres very little time to relax; its a game where you always have to be on the move, always trying to plan the next assault, always thinking ahead on how your stock of special attacks can be best employed. Some enemies are mindless drones; some scatter on contact and attack you in bursts; some are armoured, meaning you have to dash through or around them to get a clear shot at their soft underbelly. I only now realise that Ive not talked about dashing yet. 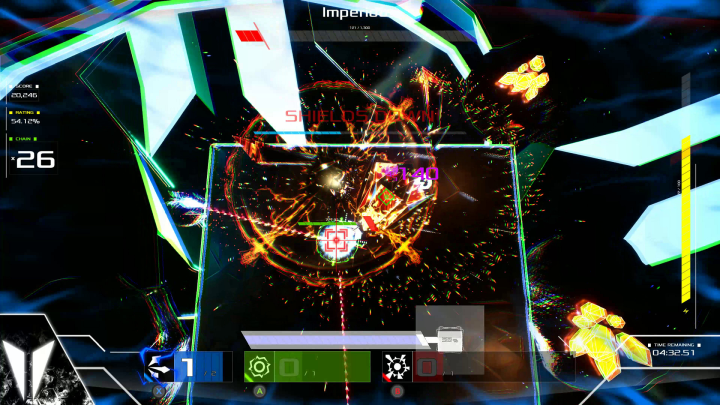 When your little slice of screen fills up with bullets, you can just dash through them. To an extent; the idea of the dash is to act like a dodge mechanism, so youre given some frames of invincibility whilst under its power, but this window gets smaller and smaller if rapidly abused. Youre supposed to use it sparingly; surging out of a trapped corner or around armour plating. Its another unique little touch; shooting lore usually tells you that your only dodge method is, well, dodging. Here, youre invited to plough head-first through the bullets. It takes a fair bit of getting used to.

That really could act as a competent, if over-literal, tagline for the game -- Zero Strain: It Takes a Fair Bit of Getting Used To. Its not a game youre going to immediately excel at  its a game that will take half a dozen attempts just to get through the very first stage. In a way, its worse for genre veterans, who need to tolerantly unlearn most of what theyve learnt over the years and rebuild their shooter credentials from scratch. I can see many losing patience; I certainly came bloody close. But then it all started to fall together. I stopped playing it as a pure twitch game and started to grind out progress. Its immensely satisfying to finally see your efforts come to fruitarian, to waltz through waves that once devastated you or to finally down one of the games massive boss fights. For the systems in place to stop being a source of frustration and start to work for you.
3.5/5

If you enjoyed this Zero Strain review, you're encouraged to discuss it with the author and with other members of the site's community. If you don't already have an HonestGamers account, you can sign up for one in a snap. Thank you for reading!

© 1998-2021 HonestGamers
None of the material contained within this site may be reproduced in any conceivable fashion without permission from the author(s) of said material. This site is not sponsored or endorsed by Nintendo, Sega, Sony, Microsoft, or any other such party. Zero Strain is a registered trademark of its copyright holder. This site makes no claim to Zero Strain, its characters, screenshots, artwork, music, or any intellectual property contained within. Opinions expressed on this site do not necessarily represent the opinion of site staff or sponsors. Staff and freelance reviews are typically written based on time spent with a retail review copy or review key for the game that is provided by its publisher.