Not too long ago, another Lovecraftian adventure came out -- Tesla vs Lovecraft -- and it was also a twin stick shooter like this one, but that's where the similarities end. Lovecraft's Untold Stories makes its bones by being an RPG styled roguelite; which is to say there is some semblance of character development as the levels progress, and from level-to-level you're not quite sure how enemies are going to be situated in any given room. This game is hard -- make no mistake.

The protagonist is a competent detective-cum-everyman who wields a shotgun with unlimited ammo and can find a Winchester rifle and a Tommy Gun if you're lucky enough in your travels. None of these weapons feel particularly satisfying in putting down Cthulhu spawn or his crazed human followers. Shooting here is not polished, is not arcade-like, and is not why you came. What you're here for is to explore Lovecraftian locations and access Lovecraftian texts; serving hot lead to enemies not of this earth is probably a distant third on our Mythos to-do list.

The chief issue, then, with Untold Stories is that our hero can take life ending damage is very short order. You could be having a singularly successful run, only to stumble into an Enemy Room teeming with muttering, gun-wielding acolytes; oozing colours out of space; and other eldritch abominations -- and since you can't escape an Enemy Room until all enemies have fallen (or until you have fallen, just as likely) its always a stressful set of circumstances. 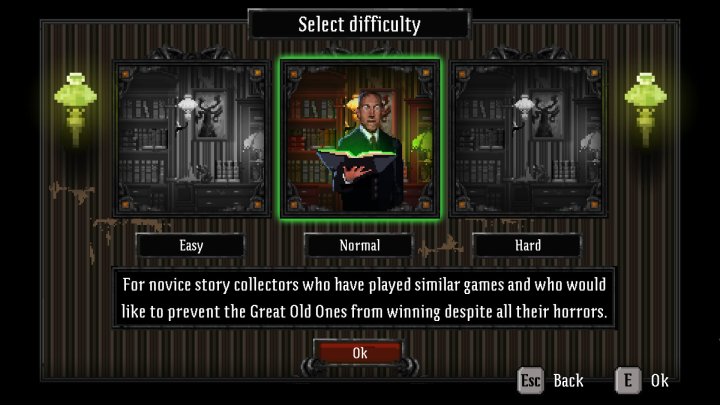 Sure, you'll be able to stockpile bandages to stop the bleeding, and collect first aid kits both small and large. You'll be able to equip talisman-like protection against ice damage, fire, acid, curses and the like. But it never seems quite enough. The odds are definitely stacked against you when there are so many ways that you can meet your end, and so quickly. To wit: I've entered an Enemy Room, where I was badly outnumbered, so I got to rolling and firing, always backwards, always on the defensive.

I'd be doing well avoiding enemies only to roll into a spike trap, which both literally and figuratively would start the bleeding. Often, in Untold Tales, defeat comes on like an avalanche: after the bloodletting came a curse, and I'd slap on a bandage, apply something to offset the curse, keep rolling and firing, but it wouldn't be enough, and I'd be overwhelmed in under 20 seconds, my health resources dwindling but not as fast as my health. The game would report that it was over, and back to the start of that very large level for me.

To make matters worse, the large, dark, stressful levels are simultaneously dull. The layout is repetitive: most rooms are simple squares on the map offering up a glut of items available in drawers and cabinets and chests to add to your ridiculously overpopulated cache; others are corridor-like and usually packed with foes; still others feature special item events.

These item events feature some artifact of interest upon which the game tries to establish itself as an occult-themed mystery; you'll have to decide whether or not to investigate for fear of losing your mind due to the enormity of the artifact's implications. Do you gaze upon the terrible thing and react like a normal person, or react like a hardened dick with an air of detached curiosity, or do you leave well enough alone? The trouble is, that like those Choose Your Own Adventure books that some of us used to read as kids, it's often very difficult to tell when investigating a particular item is going to have negative ramifications for our hero's sanity. 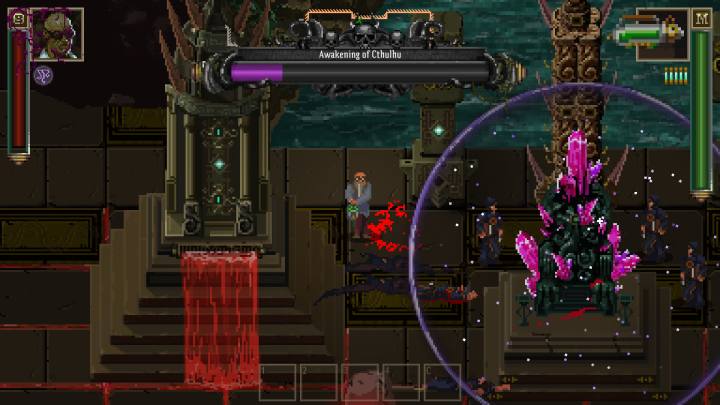 Because that's right. This game is another Lovecraft adventure with a sanity meter. You're damned if you do and damned if you don't: not only might some seemingly innocuous discovery send you babbling to yourself about how this isn't right, but if you go through the game ignoring anything untoward, you won't learn enough about the Great Old Ones (the biggest and baddest of all the monsters), and you will never see the true ending of the game. That date to face down Great Cthulhu will never be kept because you will quite rightly go mad in the absence of enough knowledge to come to grips with what you're up against.

This means that you must necessarily investigate a lot of what you see, and a lot of what you see will cause you to lose sanity, which can only be replenished by consuming chocolate you find (naturally) and by coming across and investigating a very small number of everyday items with a humanizing effect that replenishes some lost sanity. There aren't enough of these items, and there's not enough chocolate. So if you're trying to learn about what's going on in the world, you are slowly (or quickly!) going mad.

Yup. So if you're counting, that's yet another way for your game to end (because madness leads to self-harm). And yet! In the face of all of this, I didn't hate Untold Tales. While I was disappointed at the ease with which oblivion can claim you, I appreciate the love that went into pouring so much of the subject material into the game. Sure, the execution could use quite a bit of tweaking, but the core of a great game is certainly here. Perhaps if the game wasn't a roguelike and accordingly was less unpredictable, it wouldn't be so difficult; you could plan your course, and feel more like a detective carefully dipping his toes into the dreafdful occult before submerging proper, and less like a foolhardy adventure seeker rolling the dice. 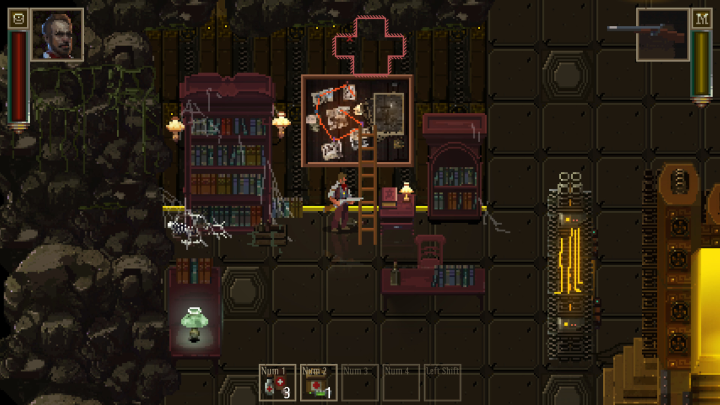 I get that the unpredictability and feeling of dread engendered by it being a roguelike works hand-in-hand with the subject matter. I get that. But Untold Tales needed something to help mitigate our frailties within its adventure which can end abruptly at any time after putting in painful hours to make unsaved inroads. Initially, you couldn't save your progress in the midst of a level, but a developer update has thankfully changed that and now you can save once per level if you find a save point.

If youre lucky enough to manage to find the hidden store(s) in a given level, you can also buy an item which allows you to reveal the map for that level so that you can avoid as many enemies as possible and go straight to stores and save points, and plot your way, creating the safest, most direct path to the boss who should fall under the weight of your stockpiled health items. If you're lucky, you've got a chance at success here -- and the developer seems to be constantly working on improving the player's chances through updates. That the project is blessed with such a conscientious developer is a good and needful thing, because even in its present state, Lovecraft's Untold Stories feels like a work in progress.

If you enjoyed this Lovecraft's Untold Stories review, you're encouraged to discuss it with the author and with other members of the site's community. If you don't already have an HonestGamers account, you can sign up for one in a snap. Thank you for reading!

© 1998-2021 HonestGamers
None of the material contained within this site may be reproduced in any conceivable fashion without permission from the author(s) of said material. This site is not sponsored or endorsed by Nintendo, Sega, Sony, Microsoft, or any other such party. Lovecraft's Untold Stories is a registered trademark of its copyright holder. This site makes no claim to Lovecraft's Untold Stories, its characters, screenshots, artwork, music, or any intellectual property contained within. Opinions expressed on this site do not necessarily represent the opinion of site staff or sponsors. Staff and freelance reviews are typically written based on time spent with a retail review copy or review key for the game that is provided by its publisher.