You Died but a Necromancer revived you will likely evoke the feeling of 1980s arcade titles when you witness its colorful, pixel-based art style encased in a center "monitor," with side art to complete the arcade cabinet emulation. Even the premise has an oldschool vibe, where you're tasked with reaching the exit of single-screen, maze-like rooms while avoiding tons of hazards, all within a top-down perspective. If you're into classic games, there's enough here, at least from a distant first impression, to be enticed into a purchase.

But once you actually get into the inner-workings, it's actually more than a straightforward nostalgia trip. As you travel through very tight corridors, evading traps that include rotating spiked-logs, projectiles coming from corners of the room, and spikes that pop out of the ground in intervals, something happens; about ten seconds in, the floor starts exploding from the entrance, tile by tile. Obviously, this causes tension, since you're forced to plow through traps much faster. Further adding to the pressure is the fact that if you get killed once on any of the rooms, you'll be whisked back to the first area of a floor. And at this point, you'll realize the game's entertainment value is gonna live and die based on the quality and variation of hazards encountered. 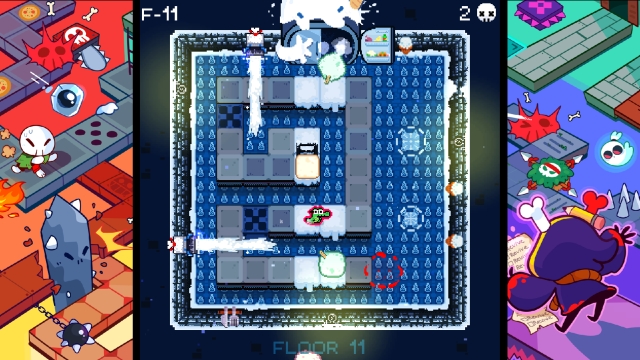 The aforementioned mainstay obstacles are simple enough to overcome, even with the floor disappearing from behind, but things quickly change a few rooms later. Sometimes you'll have to contend with these traps spaced just a few tiles from each other. Easy to dodge on their own, but they become very tricky back to back, and given the twisting nature of each compact room, accidental kills will happen on numerous occasions; a projectile "stream" or a shifting block you passed will usually greet your character again during an immediate U-turn or in an area that's also positioned beside the exit. And the reason you'll likely forget such a transparent hazard is because you're being mindful of the exploding floors and focusing on another trap.

You might get the impression all this sounds a bit excessive and overbearing, but take comfort in knowing "Necromancer" is actually pretty accessible and fair when compared to many die-a-bijillion-times titles on the market. At its worst, due to the procedural design, you might get a goofy row of traps that kills you because of the combined movement of their patterns. Besides that, a solid dose of concentration and skillful hand-eye coordination will get you far. And on the chance that the normal difficulty won't satisfy, there's a harder setting with more trap placements and one higher than that which sends you back to the first room of the first floor after one death; the game labels this highest setting as the intentional way to play the game, so be thankful it's optional. 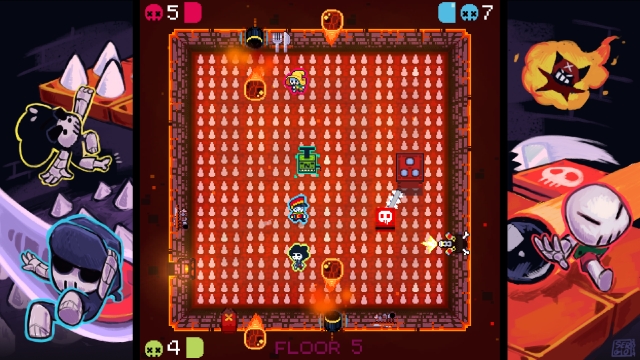 If there's one nitpick to be had, it would be the game's length. With a total of six floors and 28 rooms, there's not a whole lot of diversity. A shame, considering the hazard placements are really engaging in some spots, not to mention the third floor, which approaches fire and ice themes in a smart manner, showed potential in hazard variation. But the higher difficulty settings genuinely change the tone and pacing of the challenges, and there's some nice extras. Endless mode is self-explanatory, but the local co-op option, allowing up to four players, will give an amusing experience if you can get three friends onboard. There's even a versus mode that captures the frenzied spirit of something like the Bomberman series; you can either race each other to the exit normally, as speedy small sprites, slow big sprites, or even having to navigate over tiles that visually fade away.

You Died but a Necromancer revived you seems to almost revel in the fact that it's a brief game. It introduces concepts, puts them on display, and when it feels like it doesn't have much left to present, it concludes before things get too repetitive, but offering bonus goodies for those wanting more. That's completely fine when done right, and this title does just that. At best, the game is a short, challenging romp that's good for quick bursts and a neat title to break out for local multiplayer sessions. A lengthier sequel in the future, with more ideas and themes, would be a pleasant sight, though.
3.5/5

If you enjoyed this You Died but a Necromancer revived you review, you're encouraged to discuss it with the author and with other members of the site's community. If you don't already have an HonestGamers account, you can sign up for one in a snap. Thank you for reading!

© 1998-2021 HonestGamers
None of the material contained within this site may be reproduced in any conceivable fashion without permission from the author(s) of said material. This site is not sponsored or endorsed by Nintendo, Sega, Sony, Microsoft, or any other such party. You Died but a Necromancer revived you is a registered trademark of its copyright holder. This site makes no claim to You Died but a Necromancer revived you, its characters, screenshots, artwork, music, or any intellectual property contained within. Opinions expressed on this site do not necessarily represent the opinion of site staff or sponsors. Staff and freelance reviews are typically written based on time spent with a retail review copy or review key for the game that is provided by its publisher.