In Yakuza, SEGA have diligently and patiently built an extraordinary combat engine that thrives on cycling through numerous martial arts practices to culminate in truly cinematic encounters. You can invest in styles that focus heavily on quick-stepping around enemy attacks and unleash blistering counter strikes from an opponent's blind side, or styles that allow you to attack from behind defensive guards or even offer up counters and counter-counters should the need arise. It evolves through constant battles, lending every skirmish with even the lowest gutter criminal a sense of relevance. Successful battles dial up experience points which can be invested in better skills, more explosive counters, hardier ways to pummel your way out of a corner. With every busted face, broken nose and bloodied knuckle, Kazuma Kiryu slowly becomes a more complete warrior.

Fast forward 20-30 hours and youll reach endgame. Kiryus waged war on several yakuza sects, shady secret government hit-squads, battalions of street thugs and a dozen odd-looking dudes in shiny gold suits. This one last fight takes part on the topmost floor of a massive skyscraper that Kiryu needs to brawl his way up to, level-by-level, dueling with knife wielding goons while attack helicopters drop black-clad marksmen to pepper you with pistol fire and hand grenades. By the time I reached the pivotal end game fight, I was a master of three different kinds of deadly martial arts and a serious practitioner of a fourth. The scene was set with an epic battle, on the highest point of this massive building, set to a backdrop of the Tokyo skyline and lazily drifting snow. It should have been an undaunted battle of back-and-forth offences, of feints and counters and ever-shifting momentum. Instead, I battered my opponent half to death with a love couch. Not because I had to; just because I could. 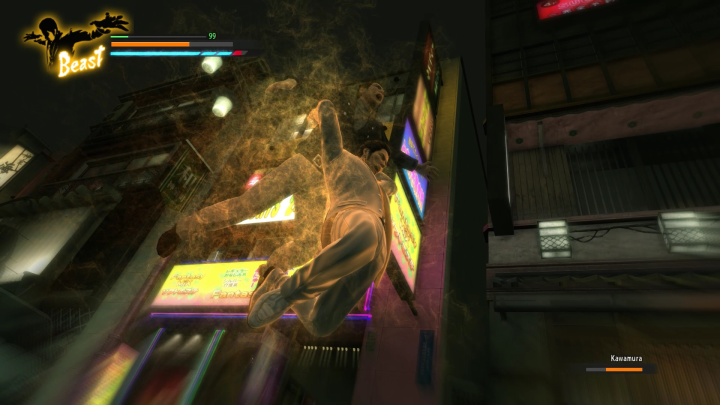 Spend anytime with any Yakuza, and youll quickly learn that it takes your feeble expectations of how a game centered on the honour-driven Mafia of the East should work, casually crumples it up and tosses it aside. Sometimes it sticks to type: Kiwami starts off where Zero finished, with Kiryus previous war against his own family neatly concluded and him firmly placed back in the fold. The years between games have been productive, and hes steady worked his way back up the ladder until he finds himself at the verge of captaining his own chapter. This stability is not set to last; in a series of rapid-fire events, he takes the fall to protect the people closest to him, is expelled from the family and left to rot in jail for a decade. Upon his return to the free world, he finds a lot to be upset about. A lot of money has gone missing, and the few friends he has left are all mixed up in either its theft or attempted recovery. Its all very messy.

In trying to find his place again in the world, Kiryu has to contend with chapters of the yakuza carefully fostering a decade old grudge while searching for what few connections he has left to the world. His childhood sweetheart hasnt been seen since he was imprisoned, and his only lead is a young girl who claims to be the daughter of the sister he never knew existed. Except she has a locket, which contains information on the lost fortune, possibly, so theres all kinds of malcontents after her, as well. Truth be told, the only things Kiryu seems to find is more reasons for a lot of angry looking men to want to beat the living crap out of him. Armies of them consistently try.

Much like Zero, theres a serious tale with serious consequences that stoney-faced Kiryu needs to trudge through, one steeped with betrayal and redemption thats filled with enough misery that theres no way anyone will emerge from the grime to claim their happily ever after. People die, in both their attempts to aid and obstruct Kiryus ever-evolving quest, and hes forced to carry that weight. He's constantly reminded that the only way to move forward is to step over the corpses his circumstances produce. That sounds pretty heavy, so, forget all that noise, lets go to a bikini bar instead. Except that slim girl in the skintight dress is actually a hitman, and that shotgun sure as hell isnt a prop. Maybe you can bounce for a desperate hostess club and beat up the latest batch of unwanted regulars and be rewarded with an Italian-made scarf. Or you can go around collecting pocket tissues for a distressed gentleman stuck in a public toilet. That seems a very mafia thing to do. 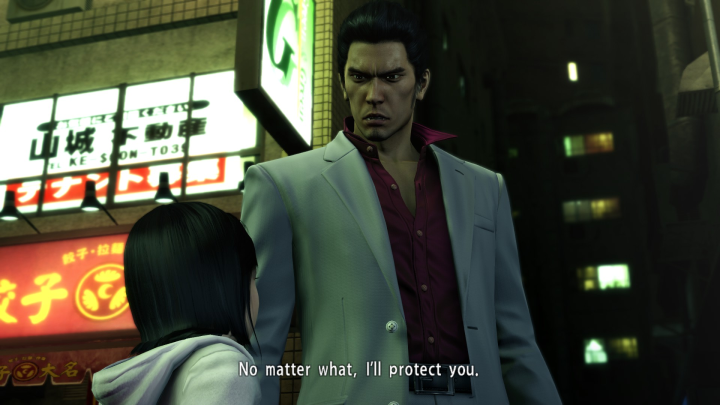 Its worth pointing out that Kimami is built from Zeros engine, and shares a lot of that games distractions. You dont have to tackle the campaign on a full time basis, and a lot of the appeal is simply wandering around town and finding out what little slice of surreal bizarreness might strike you next. You can spend what money you have at local cabaret bars in the hopes of wooing a hostess or two, or you can let yourself get picked up by a well-endowed young woman on the streets who certainly isnt part of a scam that will see you taking on a group of smarmy thugs in tuxedos. You can chase down fake police officers who try to scam you with on-the-spot fines for laws that dont exist, or buy sandwiches for a local gang banger to obtain information you never needed. Or you could just waste time beating a room full of eleven-year-olds at pocket racing and being really over the top smug about schooling actual schoolchildren.

Still, at the same time, its important not to go in expecting a full Yakuza Zero retread. Before its anything else, Kimami is a remake of the first game, brought back up to date and altered slightly to fit Zeros massive 100+ hour bulk snugly back into the canon. In comparison, Kimami took me around thirty hours to complete, displaying a much smaller campaign and significantly fewer ways to idle your time away. Theres no massive sub-job like running an estate agency to make up the bulk of your money; theres no weapon import quests where you send agents to the corners of the world to procure new ways of stoving peoples heads in. Theres no twin protagonists; but theres certainly still a Goro Majima. 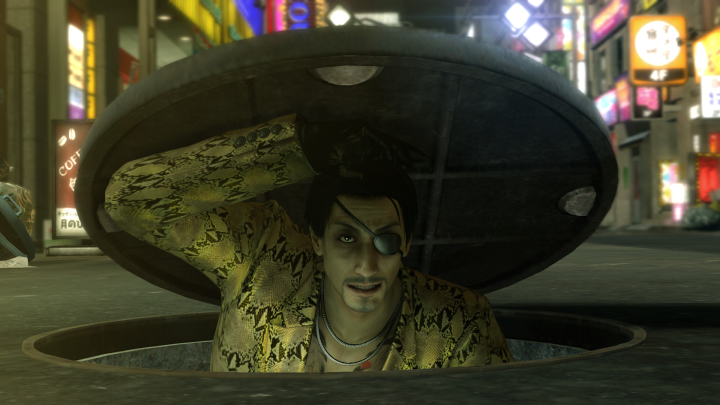 In Zero, we saw Majima rise from his gilded imprisonment to his own place within a rival clan. Hes no longer part of the main cast, but he makes up for his lack of playability by spending the entire game crafting ways to ambush and surprise Kiryu in the hopes of crafting the perfect fight. Hell pop out of nearby dustbins or emerge from manhole covers to launch attacks at inconvenient times. Hell fake the zombie apocalypse in an excuse to shuffle down dark corridors and unleash surges of undead kung-fu. Hell hang around bowling alleys to try and compete in more than just fighting (he cant), or dress up in decade old finery to show he has what it takes to hang with the kids in a local nightclub (he doesnt). Beating him acts as a way to regain skills, and slowly reintroduces skills and perks to your DRAGON fighting style.

You can avoid all that silliness and work your way through all thirteen chapters instead, but why would you? The driving plot is certainly strong enough, the characters relatable enough and Kiryus actions noble enough to buy into wanting to see them through to conclusion. Theres orphans to rescue, innocents to avenge, rival mob bosses to crush underfoot. But it wouldnt hurt to spend some time in the local arcade playing a childrens card game featuring women in very little clothing pretending to be giant insects and wrestling each other. While youre there, why not drop some yen on trying to grab a stuffed squirrel in the UFO Catcher machine? Spend time on the streets, and youll just end up talking down people attempting suicides, or interviewing for a job in a male escort bar, or pretending to be a homeless guys son so you dont hurt his feelings. You can also suplex would-be muggers spine-first on safety railings, or see off rambling conmen by tipping containers of salt in their eyes. That skyscraper -- and all the people within wanting to kill you -- isnt going anywhere.

If you enjoyed this Yakuza Kiwami review, you're encouraged to discuss it with the author and with other members of the site's community. If you don't already have an HonestGamers account, you can sign up for one in a snap. Thank you for reading!

© 1998-2021 HonestGamers
None of the material contained within this site may be reproduced in any conceivable fashion without permission from the author(s) of said material. This site is not sponsored or endorsed by Nintendo, Sega, Sony, Microsoft, or any other such party. Yakuza Kiwami is a registered trademark of its copyright holder. This site makes no claim to Yakuza Kiwami, its characters, screenshots, artwork, music, or any intellectual property contained within. Opinions expressed on this site do not necessarily represent the opinion of site staff or sponsors. Staff and freelance reviews are typically written based on time spent with a retail review copy or review key for the game that is provided by its publisher.