I have to be careful not to forget Im supposed to be reviewing a brand new video game and not let this whole thing devolve into a nostalgic ramble. Its going to be tough; you see, I spent a lot of hours on the Mega Drive original of Toejam & Earl. For a while, it wasnt simply part of the multiplayer rotation my friends and I would squander our evenings on, rather than it became an obsessive focus. Back then, there was simply nothing else like it available on consoles; creator Greg Johnson took the idea of Rogue, mashed it up with over-the-top 90s rad-ness and somehow managed to make it fit on a 16bit cartridge, complete with multiplayer.

It might be difficult to understand these days, what with the thriving Indie scene kicking out an average of seven rogue-likes per minute, but it was a completely unique experience back when. There was a sense of freedom and exploration that slowly resonated with a lot of players not found in SEGAs library of mascot platformers and scrolling shooters. It didnt find immediate success, but became a sleeper hit, solidly building up an appreciative following. It replaced fast-paced action with laid-back satirical goofiness, asking you to guide two hip-hop loving aliens around a weird deconstructed Earth in search of their ship parts so they could go home.

The level progression was weird; rather than complete a stage and move on to the next, Earth was presented as a series of isometric floating platforms you had free reign to explore. You rode elevators hidden somewhere out there to progress, but clumsy (or knowing) players could plummet back to older stages by falling off the edge of the map. These maps were filled with pesky humans who, mostly, wanted to do you harm. Also, little devils with pitchforks that would gleefully stab you for reasons I never grasped. You had no innate ability to battle these folk outside of collecting presents and hoping when you opened them it would give you a temporary by useful perk. Rocket boots would let you zoom away from danger; tomatoes would give you something to lob at people in the hopes of dissuading their interests. Im talking a lot about the original game and doing that exact thing I hoped to avoid, arent I? 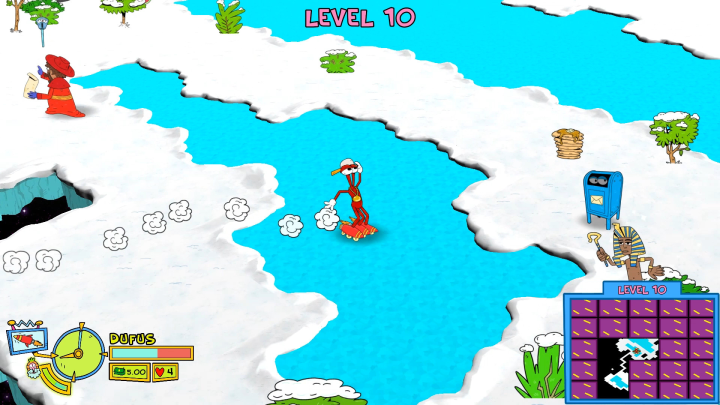 In my defence, Toejam & Earl: Back in the Grove (a.k.a., the game I should actually be talking about) replicates a lot of the original with such unnerving accuracy, that everything Ive talked about thus far easy extends to both versions. Once again, the alien duo is trapped on a version of Earth made out of stacked isometric space-islands and, once again, they need to escape by finding ten craft parts scattered throughout. So this could be an easy write up: a modernized game that faithfully readapts the foundations of beloved classic that I personally adored. Heres the dilemma: does this resurrected foundation hold up in an era where rogue-likes have, by sheer volume, managed to become their own sub-genre as well as it did back in a period where such a design choice was a unique oddity?

Isnt writing a cliffhanger question at the end of a paragraph such a hack game reviewer thing to do?

Anyway, yes. Toejam & Earl, in any iteration, has never been shy of challenge, but what still makes it stand out among the throngs is the relaxed setting and distinctive environment. It pays homage to the originals stand-out funk-filled beats not only with brand new tracks, but with fresh remixes of the old BGMs. Its not about slowly building your character up with random equipment drops and minmax levelling structures until they roll over any threat; it maintains that you can rarely fight back against the odd inhabitants of Johnsons bizarre reimagining of Earth.

Thats not always to Back in the Groves favour. It does mean that most of your exploration will be made via giving anything human-looking a wide berth in the hopes it will leave you alone. Sometimes, this works out fine; sometimes, the lazy buggers are asleep and you can just tip-toe past and, sometimes, they seem pretty content to just to be about their own business. But, certainly as you start to climb through the higher levels, this is not often the case. Though some characters are certainly faster than others, youll rarely be in a circumstance where you can noticeably outrun the aggressive humans and can often become the unwilling leader of a conga-line of murderous followers youll have to lead around until you find a means of escape. Sometimes, you can cut a few corners and leave them in your wake; sometimes, you can dive into a pool (you can hold your breath longer depending on how much health you have left) , or you can open presents in the hope of finding something useful. Aggressive actions, like lobbing tomatoes, simply dont work very well, presenting a clumsy aiming delivery which will force considerably more misses than hits. The fact that game dissuades you from any kind of real combat is certainly going to deter some people from playing and it does contribute to the sometimes shuffling pace elongated runs of Back in the Grove can suffer from. And thats a shame, because its a game that drastically improves when making use of its multiplayer function. This as undoubtedly the case for the originals multiplayer options, and counts doubly so for Grooves four player online co-op. It also helps that not every human is trying to hurt you, and even those that are, often do so more creatively than that oddly-placed pitchfork-welding devil. He even makes his return here alongside other familiar foes. Stray too close to a hula dancer and youre compelled to dance alongside her, making you an easy target for any chasing hostiles. A malicious Cupid flaps around the stage, pelting you with love arrows that muddle up your control settings for a spell. The newer cast are just as inventive: survey takers chase you around, waving their clipboards, making you fall asleep should they catch you; roving gangs of franchise fanboys stampede after you mercilessly in order to try and steal a selfie (though are loyal enough to apologise every time they bustle a section of your life bar from you).

Others help you. A meditating Gandhi creates a bubble of peace & love that provides a safe harbour for all; a guy dressed as a carrot will identify unknown parcels for you, or issue random stat level ups if youve gained enough experience. Cosplayers will gamble with you using 20-sided die, and sushi chefs will sell you HP-restoring raw fish. Because its their job, and all.

You could argue that it would have been easier for Toejam & Earl to try and reinvent itself with more modern sensibilities,. Except its already tried that a couple of times; the direct sequel on the Mega Drive was a decent platformer released on a console swimming with decent platformers. It wasnt what the existing fanbase wanted or expected. Their third outgoing made an attempt to go back, but its Back in the Groove that commits hardest to this mindset. It sticks reverentially to the foundations it made its name on, which is a hell of a gamble to make on a game made nearly twenty years ago. It sucked me in back when, forcing me to grit my teeth while being murdered by psychotic dentists mere feet from an elevator that would have saved me, or opening a present in the hopes of a weapon only to score rocket boots that sent me tumbling off the edge of the map. Back then, I was engaged enough to dust myself down, take a deep breath and start again. Turns out that very much remains the case to this day.

Only, this time, sometimes those saviour elevators are mimics and they eat you. Also turns out I have considerably more ways to curse than I had in my youth.

If you enjoyed this ToeJam & Earl: Back in the Groove! review, you're encouraged to discuss it with the author and with other members of the site's community. If you don't already have an HonestGamers account, you can sign up for one in a snap. Thank you for reading!

© 1998-2021 HonestGamers
None of the material contained within this site may be reproduced in any conceivable fashion without permission from the author(s) of said material. This site is not sponsored or endorsed by Nintendo, Sega, Sony, Microsoft, or any other such party. ToeJam & Earl: Back in the Groove! is a registered trademark of its copyright holder. This site makes no claim to ToeJam & Earl: Back in the Groove!, its characters, screenshots, artwork, music, or any intellectual property contained within. Opinions expressed on this site do not necessarily represent the opinion of site staff or sponsors. Staff and freelance reviews are typically written based on time spent with a retail review copy or review key for the game that is provided by its publisher.