While originally an arcade game, Altered Beast made a lasting impression with the Sega Genesis port. It was the first pack-in title for the console, meaning a lot of early adopters were exposed to the game. In turn, they were exposed to its oddball premise, digital, crackly voice samples, and "interesting" game mechanics and flow, with some considering these mindblowing for the then-released 16-bit console, showcasing the possibilities that could be had beyond 8-bits. So for some, it comes as no surprise that this Genesis title was inducted into Sega's 3D Classics lineup under care of the M2 development team. But for others, this choice was baffling.

From a distance, the product looks like an innocent action auto-scroller with a unique concept: you're a man, summoned back from the dead by the Greek god Zeus, who can turn into a different humanoid animal in their respective stages. From a werewolf with a dashing flash knee attack to a bear that can turn enemies into rocks, each one has to pummel a slew of giant wasps, zombies, and big-headed creatures in the shape of a chicken leg who... are actually named Chicken Leg. Transforming into these beings isn't a snap decision, however. As you punch, kick, and jump through hordes, you have to keep an eye out for grey, three-headed dogs, each one containing an orb; the first two make you into a bulkier human and the third alters you into a beast, complete with a dramatic, close-up transformation sequence. 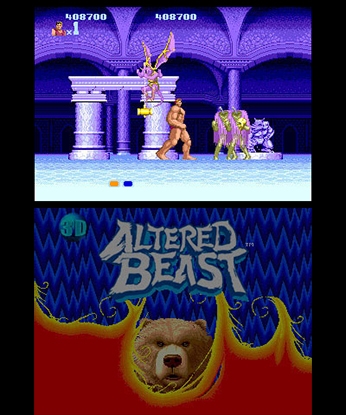 Sounds like decent fun. So what's the problem? Some will immediately point at the campy nature of Altered Beast, such as its "corny" voice samples, with bits like the monotone "Power Up" or the main villain's dramatic cackle. Goofy character designs don't help, either, which range from the aforementioned chicken legs, to purple unicorn boxers and gross bosses that look like they came from low budget monster movies.

However, stuff like that can be overlooked easily if the game's design is solid and fun. But it isn't. The tempo and flow can be best described as awkward, as the auto-scrolling moves at a literal snails pace. Worse, most enemies move on screen just as slowly, and more times than not, only two appear regularly at any given time. As is typical for video games, each foe has an attack, forcing you to counter each one differently, yet here they are so basic in approach that they're downright questionable. Airborne creatures leisurely fly onto the battlefield? You... you just jump and punch them in the face. Undead beings stumble forward and counter your punch with longer punches? Well, you... you just kick them. That's it. They don't even have varying attacks when they reappear in later stages.

Though, in spite of its generic approach to game design and lax enemy encounters, Altered Beast can be an irritating experience at times. The main reason for this is that you're only given two lives to work with... for the entire playthrough. And damage carries over into subsequent stages. And you don't get health refill items. And there's no continues. While the majority of opponents are easily disposable, you're still likely to get damaged from time to time, knocking a bit of vitality from your three-bar health meter. Doesn't help that the three-headed grey dogs purposely appear during awkward moments, usually when other enemies are in the way. 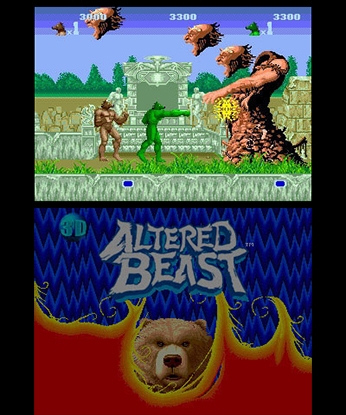 But the hardest encounters would have to be the boss fights... for all the wrong reasons. Frankly, bosses take up a chunk of screen real estate, and it doesn't help that their attacks borrow a good section, as well. The first boss, for example, a hideous brown demon with a bottom half comprised of skeleton pieces, engulfs the right side of the screen. His attack consists of throwing four giant heads downward in the small segment you're allowed to move in. While dodging is more than doable, the bulky nature of your character sprite almost guarantees a hit. Unfortunately, the second boss one-ups the ridiculousness. Basically a giant Venus fly trap that spits out eyeball spreadshots, it's one of the more infuriating fights in the game. Your huge, horizontal flying dragon can barely squeeze through tiny spaces between these projectiles...

Now, you think M2 would have added some interesting bonus features to make this dreary experience a somewhat worthwhile purchase. Sadly, the only "exclusive" thing they added was Random Form mode, where... you get a random animal transformation for each stage. It's basically a slight variation of a cheat code that exists in the original Sega Genesis version... which is still accessible in this port. So why? Why did M2 even bother doing a port of a mediocre title if they weren't going to put much effort outside the usual 3D stereoscopic treatment? Well, as stated in an interview, they handled this game because they needed a quick release between titles they spent a ton of effort working on. Filler, essentially.

But why Altered Beast specifically?

Because, as stated in the interview, they took a peek at what was popular on the Wii's Virtual Console...

If you enjoyed this 3D Altered Beast review, you're encouraged to discuss it with the author and with other members of the site's community. If you don't already have an HonestGamers account, you can sign up for one in a snap. Thank you for reading!

© 1998-2021 HonestGamers
None of the material contained within this site may be reproduced in any conceivable fashion without permission from the author(s) of said material. This site is not sponsored or endorsed by Nintendo, Sega, Sony, Microsoft, or any other such party. 3D Altered Beast is a registered trademark of its copyright holder. This site makes no claim to 3D Altered Beast, its characters, screenshots, artwork, music, or any intellectual property contained within. Opinions expressed on this site do not necessarily represent the opinion of site staff or sponsors. Staff and freelance reviews are typically written based on time spent with a retail review copy or review key for the game that is provided by its publisher.