Sometimes, as they say, the facts are stranger than fiction. Did you know, for example, that back in the forgotten age of 1995, EA roped a couple of their developers together and decided it was time they got them some of that delicious Super Punch Out glory? In many ways, they were clever about it; in many ways, they produced a game that will never get the recognition it secretly deserves. And, in many ways, they managed to take a well-loved foundation, rebuild it on a more powerful platform, and still manage to make sections of it significantly worse than the original.

This should be a tale about a game thats better than it deserves to be because, in their shameless attempts to ape a Nintendo Classic, EA showed no small amount of cunning. Punch Outs appeal lay in its cartoony violence, eschewing any attempts at a realistic boxing simulator behind a more arcadeish approach; you were a plucky little underdog scraping against bloated royalty, rampaging hillbillies and Mike bloody Tyson (until the license expired, anyway). It was always more twitch play than tactical; you had to dodge and weave around your significantly heavier foes and pepper them with long enough combos to build up special attacks. There were only three rounds to try and achieve victory in; each round only lasted one minute. This meant that each fight could be fought in one big high-octane sugar rush; a stream of constant non-stop aggression and none of that awkward hugging in the corner the actual sport is so fond of.

So well played EA said absolutely no one in in the last decade or so; by licensing this game behind the Toughman Contest, it was able to perfectly ape short, limited rounds, but behind an umbrella of legitimacy. The Toughman Contest was an amateur fighting affair established before the boom period of MMA that allowed almost anyone to don a pair of gloves and have a go at beating the hell out of someone. It never tried to pretend it was the chess-with-uppercuts exhibition that professional boxing models itself as; it featured two slightly out-of-shape brawlers swinging as hard as they can before one of them fell over either from a repeated blows to the skull, or exhaustion. 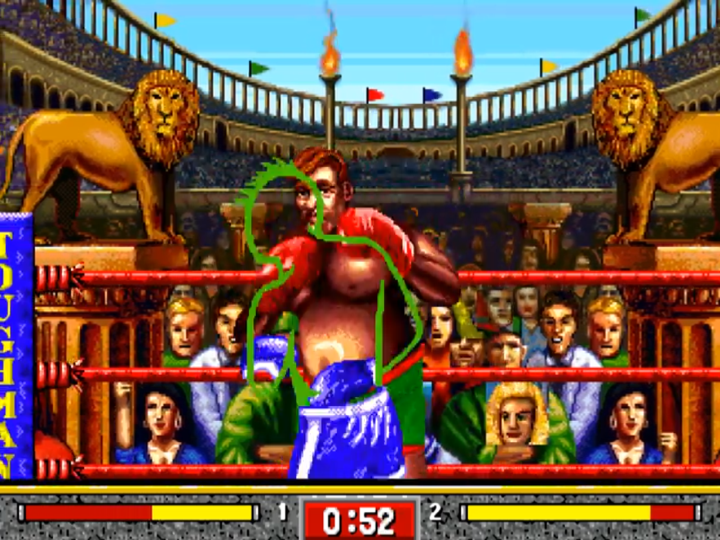 Despite this clever bit of license chicanery, Toughman Contest never seemed to find a market over on team SEGA. Both a Mega Drive and 32X version saw release, both to reasonable critical acclaim, but this never helped it become any more than a semi-obscure oddity. Perhaps not surprising for a game released almost a decade after the original Punch Out, Toughman certainly improves on several aspects. Youre not hard locked in to compete as the same boxer and have free reign to champion any of the games roster. You can modify them even further by selecting three of thirteen unique special abilities. Thats a level of customisation light years beyond being stuck with Little Mac for life, but its not particularly well executed.

The main issue is that, even though all the available boxers have their own personal stats, they dont feel different enough from each other to make much of a difference. This is further exacerbated by the ability to cycle through special attacks at will; without these skills hardlocked to specific fighters, theres no reason to try other fighters out. You might as well just stick to the one you like the look of the most, and play around with his resettable skillset. Only, the cosmetics dont much matter much, either, because youre displayed on screen as a lime green silhouette in an attempt not to obscure your view of the other boxer who is often standing directly in front on you, trying to cave your face in.

You could live with that. At least I could; I can appreciate the attempts of offering a player more choice, even if those efforts do end up eating their own tail. But the special moves have bigger issues; someone decided it would be a great idea to develop an arcade boxing simulator but have you input your heaviest hitting attacks like it was a tourney fighter.

Its so ridiculously frustrating for so many reasons. The Ryus, Terry Bogards and Liu Kangs of the world can survive the half second or so their character model bobs around like a lunatic while you try and roll your d-pad semi-circle forward (HADOKEN!) , but Toughman has your opponent constantly right in your face, and combining the input method for special attacks with the method in place for blocking and dodging is ridiculously clumsy. You could, I suppose, argue that this is a necessary evil considering the Mega Drives controller is replete with a limited choice of buttons. Except Toughman Contest was released a couple of years after the new six button pad was at large, leaving the X, Y, and Z buttons just sitting there, mocking you with their inactivity. 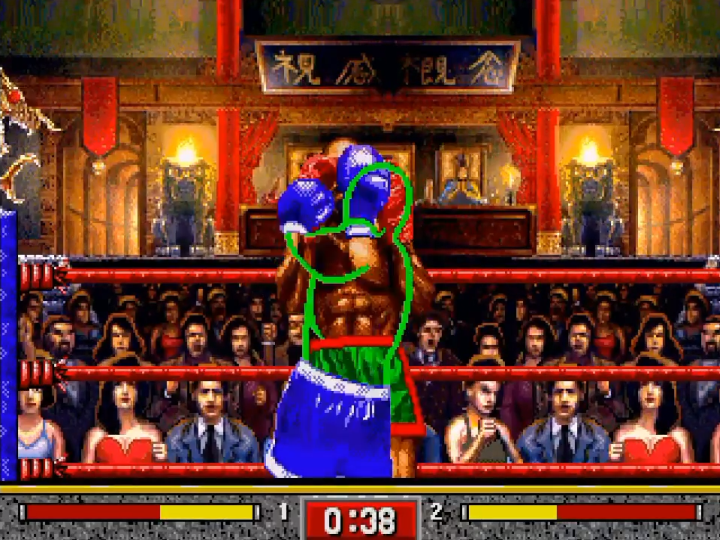 Perhaps  PERHAPS  I could understand this for the Mega Drive port, but the 32X made the new pad dangerously close to obligatory for its limited library. It worked on the assumption that you have the six button pad, and offered an often awkward alternative for the luddites still plucking away with a pedestrian three. Its perhaps telling to admit that this not being picked up in the upgraded port does not surprise me at all, because theres very little difference between the two strains. The only noticeable change is that the 16bit goofy arena backgrounds containing spectators bungee-jumping off damns, getting wasted barside or having saucy Canadians moon you from snow-covered wood cabins have all been completely redrawn into more static, less interesting affairs. Its even downgraded some cosmetic aspects; the Mega Drive version contains unique ring girls for each of the five arenas; the 32X has the same girl follow you from fight to fight.

At the heart of things, Toughman Contest is little more than just a run through a gauntlet of fighters culminating in an angry looking Eric Butterbean Esch emerging from the crown, ripping his shirt off, and lumbering into the ring to offer you a damn good beating. Erics a tough end-of-game fight, but resilient fighters can grind out a victory. This unlocks no new divisions, no new boxers, and no new special moves. Theres a small animation of your chosen boxer jiggling a trophy of sorts, surrounded by dead-eyed ring girls, and then its back to the main menu with you. Its depressing that I get to end another 32X review in such a damp fashion. Congratulations, weary warrior; you are the king of nothing.

If you enjoyed this Toughman Contest review, you're encouraged to discuss it with the author and with other members of the site's community. If you don't already have an HonestGamers account, you can sign up for one in a snap. Thank you for reading!

© 1998-2021 HonestGamers
None of the material contained within this site may be reproduced in any conceivable fashion without permission from the author(s) of said material. This site is not sponsored or endorsed by Nintendo, Sega, Sony, Microsoft, or any other such party. Toughman Contest is a registered trademark of its copyright holder. This site makes no claim to Toughman Contest, its characters, screenshots, artwork, music, or any intellectual property contained within. Opinions expressed on this site do not necessarily represent the opinion of site staff or sponsors. Staff and freelance reviews are typically written based on time spent with a retail review copy or review key for the game that is provided by its publisher.