Theres this really thin line that all the best adventure games very carefully walk. At the heart of their conception, there are weird and wonderful puzzles that you need to crack in order to progress. Some puzzles play it straight and logical, some are imbued with cartoony silliness, but they all have to be difficult enough to solve for the player to feel satisfied at their achievement, but also not so difficult that the player feels theyve hit an impassable wall and gives up on the game forever. Its a really tough line and its massively rare for even the most beloved point & clicks to maintain this ridiculous standard throughout. 1954 Alcatraz does not have those concerns. It rarely even tries.

Sometimes, the puzzles you need to solve are so straightforward and easy that it feels more like youre playing a visual novel rather than an adventure game. Then, there are moments that will send even veteran campaigners running off for an online FAQ, but these are often borne from janky transitions between solving a puzzle and obtaining a solution. Sometimes 1954 gets things arse backwards and you find yourself in a patch of plot you probably shouldnt be witnessing yet, with very little idea of how it pertains to the continuity. But that doesnt really matter either; if the puzzles are regularly phoned in, then at least Alcatraz has a decent pop at consistency when it comes to the rest of the game. 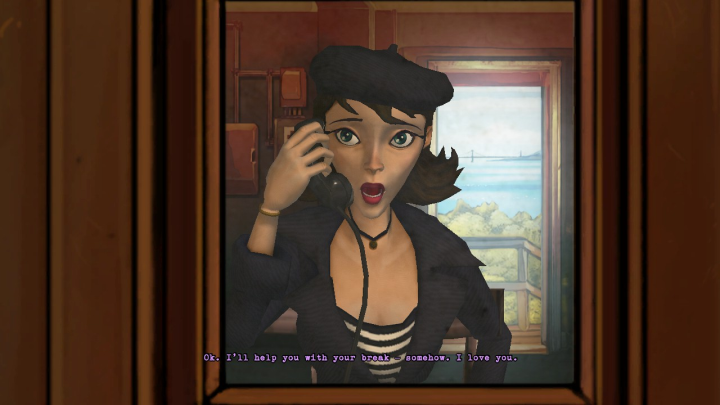 Fall foul of the hallowed difficulty line either way, and a good enough setting or plot can still save your game. The early seasons of Telltales The Walking Dead contained almost arbitrary puzzles that presented little in the way of reward for completing. But it was carried by the constant threat of losing any of its brilliantly relatable cast that the strong writing bonds you with over a very small amount of time. On the other end of the spectrum, the original Broken Sword contained a puzzle so frustratingly difficult that its earnt its own Wikipedia page. But people persisted and broke past it because they wanted to advance the deep historical mystery the bumbling American tourist protagonist kept stumbling through. Both games presented a plot you invested in and a cast you cared about.

1954 Alcatraz achieves neither. Despite hedging its bets by splitting its tale between a convict trying to escape Alcatraz Island, and his wife trying to find his ill-gotten loot to pay off homicidal mafia goons, both threads are woven into the same bland, boring tapestry where nothing of interest ever happens. This is a game filled with mob goons, convicted murderers and dirty police, and still manages to be habitually dull. This is further hurt by the bewildering ability to make the cast completely unlikeable. Joes a convicted armed robber, but the game never makes its mind up whether it wants to portray him as a hard-nosed career criminal or an honest guy trying to recover from one big mistake. Its not like 1954 gives you the freedom through his in-game choices to decide for yourself; it simply has him bounce from one extreme to the other depending on which best fits the poorly written situation he finds himself in. 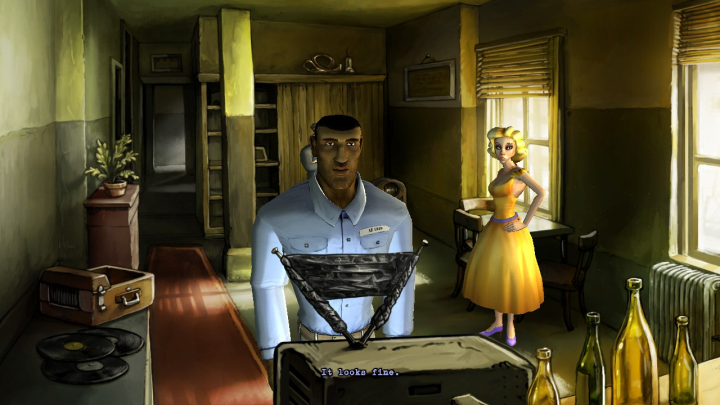 Christine follows the same convoluted archetype. When you meet her, shes openly brooding about how much she misses her incarcerated husband, and how devoted she is to him. Then, only a sparse few scenes later, she has the option of banging her neighbour. Whats frustrating is that in a better produced game, making the pair so unrelatable and unlikable should have been a masterstroke. You shouldnt like Joe; hes an armed robber with a long history of violence who makes it clear hes not above assault or murder to further his own means. You shouldnt like Christine; shes a materialistic floozy constantly prepared to hurt, steal from or sell out the people she purportedly cares about. In just about the only commendable mechanic 1954 Alcatraz advances, you can unlock different endings by making choices that either alienate the couple from each other or not so much bring them closer together but not screw over their already broken relationship any further?

Except some of those choices are so poorly explained you dont know youve struck a blow against the couples marriage until after youve done it. Even if you somehow manage to work your way through all the dark side decisions, the game offers you zero indication that youre on that route until the ending options are jarringly dropped on your lap. And, frankly, once you get there, who cares? Im not really that invested in seeing if two unlikable jerks stay with or betray each other, or if they get away with their index of crimes. Im not interested in arbitrarily snoozing through my-first-point-&-click calibre puzzles. Or controlling ugly, lurching 3D models that slowly meander around the screen just to make sure everything is even further dragged out. Its reasonably stable, only crashing a couple of times in my seven hours playthrough, and theres a cute moment where a cat sits on a record player and goes for a casual spin. I guess there are worse adventure games out there. Im really struggling to end on a positive note here; can you tell?
1.5/5

If you enjoyed this 1954 Alcatraz review, you're encouraged to discuss it with the author and with other members of the site's community. If you don't already have an HonestGamers account, you can sign up for one in a snap. Thank you for reading!

© 1998-2021 HonestGamers
None of the material contained within this site may be reproduced in any conceivable fashion without permission from the author(s) of said material. This site is not sponsored or endorsed by Nintendo, Sega, Sony, Microsoft, or any other such party. 1954 Alcatraz is a registered trademark of its copyright holder. This site makes no claim to 1954 Alcatraz, its characters, screenshots, artwork, music, or any intellectual property contained within. Opinions expressed on this site do not necessarily represent the opinion of site staff or sponsors. Staff and freelance reviews are typically written based on time spent with a retail review copy or review key for the game that is provided by its publisher.