Squaresoft brought its A-game and tour-de-force talent, birthing a franchise that has won accolades from players and critics alike. Its remaster for the PlayStation Portable and unlikely follow-up on the Gameboy Advance entranced its audience even though it hasnt had any further direct sequels, though there are a number of spin offs set in the same universe. This is another genre that doesnt sell particularly well in the West in spite of a large dedicated fanbase, and dangit, why not? As it turns out, the answers are pretty self explanatory when viewed through the lenses of my frustration and anger.

Ivalice is a high fantasy world, a portion of which is embroiled in Lions War, a conflict between two noble families and the politics that buoy them. You assume the role of Ramza, the innocent, kind son of the Hokuten and an unsung hero who commands a force of warriors that you train up from their humble beginnings as Squire, the formative baseline job for all subsequent jobs. I'll get to that later. 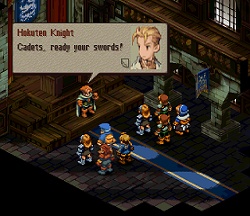 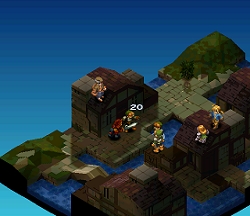 Squaresoft displays their penchant for inventive character progression by lifting the job system right from Final Fantasy V. By many it is remembered fondly, but for me its that irritating time sink that gets in the way of story progression. True to its source, as your characters master the selection of basic classes, new and more dangerous classes emerge for you to play with. Just keep one thing in mind: Job changes are free, but the time required to master each class is what you pay for the opportunity.

Character development is the largest sink into which youll be flushing all that spare time you have floating around, for whatever reason you may have that excess. I dont think its a detriment to the title per se, but it does the game no favours in an era of short campaigns and frequent auto-saves. Thats actually one of the key reasons the genre doesnt sell well, even in an industry that has a more than fair selection of Strategy RPGs to choose from, and I firmly believe we owe this game some gratitude on that point. Maybe you didn't notice that it's a little ironic that there's a peculiar lack of a port of this game to Steam?

No? Just a few of you? Relatable.

I wont drone on about it, but honestly, either youve got the time or you dont. If you do, this heres a delightful playground for endeavours tactical and stories politic. It has the main course and all the trimmings: A memorable and evocative orchestral soundtrack that dutifully sustains you and your troop through death, tension and experience grinding. Whats more is the unique aesthetic that makes the characters intriguing to look at and fun to command. It could have gone so wrong... Im looking at you, Vandal Hearts. Gameplay is as smooth as butter; menus are responsive and provide nice audio feedback; controls are well thought out and very comfortable even if they arent remappable. It just works.

Everything lines up to qualify this game as an example of how to do a job right. Job. Heh. Speaking of jobs, this is where the flaws kick in. When youre not enthralled with the detailed spritework presented in cutscenes, and the lavish, multi-layered story that underscores the beautiful visuals, youll be moving from point to point on an interconnected overworld map of interactive locations. Some are battle scenes whereas others enable you to meet the temporal needs of your squad with shops that provide essential gear. Be warned that armour and weapons do not come cheap, and you will find yourself grinding random encounters for the funds to outfit your team. 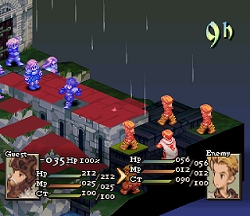 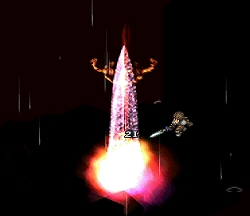 Then theres combat, venerably displayed as a multi-level isometric map of fixed squares. Think Checkers or Chess, except your pieces are the game characters, and their movement capabilities are determined by the class, skill and equipment selections you apply when youre not fighting. Combat in Final Fantasy Tactics is a wonder to behold. Its strategic complexity is presented in an easy to understand manner that invites fledgling commanders before viciously eviscerating the heroes of the unwary and unskilled. The expectation is that youll learn from bitter failure and the threat of permadeath.

Yes, that is a thing. To put the significance of this in perspective, not only do you level the class of each character, each has their own individual level that boosts the baseline HP and MP of a characters appointed job. You can further strengthen your characters with armour and gear modifying skills. For instance, a Monk normally wears just a shirt and pants, but with Equip Armour, can equip plate normally reserved for the Knight, without any detrimental effects.

Summarily you level a character, their class and any subsequent job they perform. When youre managing a team of 15 characters, the time requirement can launch into the dozens of hours. Oh, if youre got the time, it is worth it, since the characters are the paragon of flexibility in no small part due to assignable skills and abilities. Imagine a Priest (White Mage) with a bow or even a gun and the potion throwing skill of the Chemist. Its more thrilling than it may sound: Very few of my characters dont have the Item ability for the sake of survivability. There are four ability slots to configure that can turn combat into a fascinating and tense adventure in strategic options.

As much as Id love to sing the praises of this game up and down the halls there are some problems with balance that can cripple any given playthrough, especially for the inexperienced SRPG player. Squaresoft was smart enough to grant all characters access to a new class when unlocked, and you can choose the Squire at any time if you should need to brush up on all important experience grinding skills. Which you will, because levelling is going to become a problem. Always get Job Up Exp. Trust me. 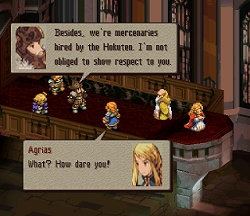 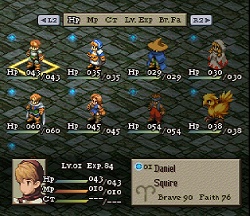 Story proceeds in an orderly manner in which enemy levels are fixed and that grants you the option of giving yourself an advantage. However, random encounters always generate foes that are several levels higher than your highest character. Ramza is always in my party, so he can be easily ten levels higher than my next highest character. Final Fantasy Tactics admirably tries to account for this by granting characters only a small HP/MP boost for each level gained, so even level 1 recruits ostensibly stand a chance against... well. Um. Thats the thing. They really dont unless you babysit them, and that invalidates the recruit system entirely.

Chocobos to the rescue! Oh boy, they may be cute, but its shameful to see them used this way. Youre given an opportunity to save a Chocobo who will hatch eggs and fill in the gaps in your roster when you havent recruited enough heroes. The Red Chocobo is quite useful, too, with excellent movement range and mid to long range attacks. Its just too bad that the mechanic is an obvious patch for a deficiency in planning. Youve got to be careful with them, though, since they dont wear armour and cant take many hits.

Theoretically it would all work if I didnt bungle my team balance by letting Ramza get so far ahead of his allies, but when it leaves you with a non-functional team because a story battle has a requirement that you havent planned for... thats on Squaresofts head, not mine. I can only plan for the things I know are coming. Sure, the tilt of combat isnt usually to court advantage, but isnt the point of this to grant me the struggle-win? Im not adverse to difficulty if its fair, but I dont consider this an instance of good player education, and the systems in this game arent nearly as complex as some others are!

When youve reached mid-game with deficiencies in your job options, not having unlocked them all, for instance, you might be tempted to restart the game and do it all again with the benefit of your experience. That begs the question: Do you have the patience? The time? Even assuming the answer is yes, should you have to in a game of this length? I dont know many RPGs that have plunked that kind of decision in front of players. In my case the answer is no flappin way! 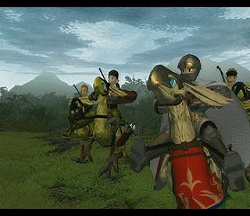 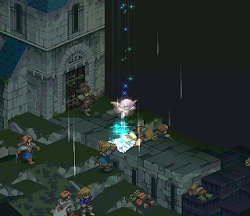 Listen to me, Im justifying the existence of Final Fantasy: Mystic Quest and its ilk - mind you it is to this day one of my favourite games - but I know the industry learned from the mistakes made here. Knowing your audience is crucial to the success of any given title, and since we werent ready for the SRPG in 1997, I can call this an unwitting foul. Squaresoft did its best to balance out the imperfections they knew about, but the published result was going to need improvements that were only going to happen in future iterations. Final Fantasy Tactics could have been more than a cult classic, but its reputation for unforgiving combat precedes it.

By the way, your heroes' soul will become crystal in just three turns if you dont revive them first, so you better get movin! If thats enough to send this game to the like it/hate it pile for cooldown, Id agree thats understandable given the time and psychological investment required of you. In my case, Ive taken three genuine stabs at playing this game, and each time I get better at it, but the time between those attempts amounts to decades at this point I frankly have no intention of investing more. Final Fantasy Tactics will remain in its niche, a forever fantasy about war, peace and the desolation of anxiety that surrounds it all.

If you enjoyed this Final Fantasy Tactics review, you're encouraged to discuss it with the author and with other members of the site's community. If you don't already have an HonestGamers account, you can sign up for one in a snap. Thank you for reading!

© 1998-2022 HonestGamers
None of the material contained within this site may be reproduced in any conceivable fashion without permission from the author(s) of said material. This site is not sponsored or endorsed by Nintendo, Sega, Sony, Microsoft, or any other such party. Final Fantasy Tactics is a registered trademark of its copyright holder. This site makes no claim to Final Fantasy Tactics, its characters, screenshots, artwork, music, or any intellectual property contained within. Opinions expressed on this site do not necessarily represent the opinion of site staff or sponsors. Staff and freelance reviews are typically written based on time spent with a retail review copy or review key for the game that is provided by its publisher.