Created by Robb Sherman from developer, Jolt Country. Released in 2011 and re-released on Steam in 2018.

Cryptozoology is one of those dark delights in life that I probably have an unhealthy obsession from scrutinizing the science similar to James Randi debunking pseudoscience. Perhaps the desire comes from reading one too many Lovecraftian stories as a teenager or the innate fascination with mysteries of any kind. However, there is something to be learned not only from confirmation biases to unexplainable events but also what fringe characters get allured into conspiracies, creatures told from hearsay and an obsession with the unknowable.

Those types of weirdos are at the core of Robb Sherwins Cryptozookeeper (CZK), an amalgamation of a text-adventure with some barebones JRPG elements to make something as surreal as its cast. The best description of the narrative is what Hitchhikers Guide to the Galaxy did for science-fiction, CZK handles the world of Cryptids as an absurdist comedy featuring a group of outcasts that despise one another (so essentially the same, except these loonies are all native to Earth.)

When Context-Sensitive Input is Not a Mere Button Press Away 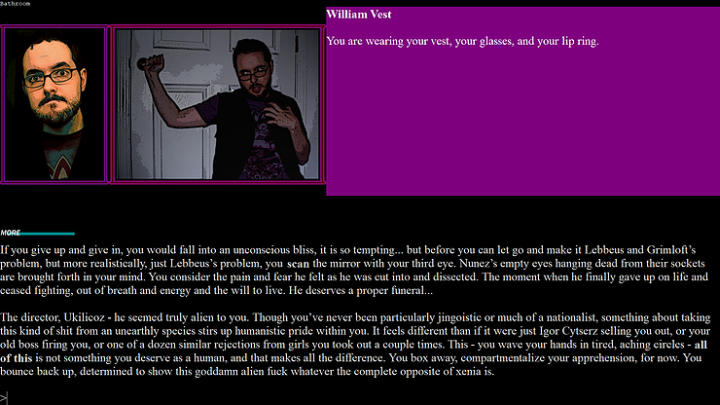 Have I mentioned how NOT serious this is?

Having played few text-adventures without much success until Thaumastry by Bob Bates, judging CZKs merits as a text-adventure is difficult. One could distinguish the writing qualities from the gameplay, specifically the puzzles and/or the exploration mechanics, yet with CZK they are meant to be as intertwined as the DNA combinations behind the Cryptids. These puzzles never feel too outlandish as they often make sense with context to the situation, yet they are also never too obvious. In an interview from Renga in Blue with Ross Sherwin, Sherwin states, I also want to get away from something that David Welbourn said in the Get Lamp interview [] If you see a bone in a text game, you know youll eventually have to give it to a dog. The execution reminds me specifically of Grim Fandango where examining the puzzles were part of the storytelling, especially with the amount of flavor text and obscure references revealed whenever you probe William Vests scatterbrain mind. 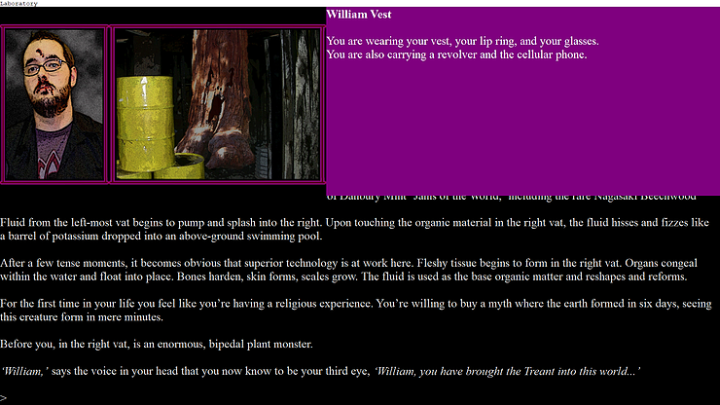 Context can also become a problem in CZK, specifically when key information is missing. Maybe this problem is said from inexperience, but there were three puzzles where context was lost on me not from the lack of information about the puzzle but how to manipulate the interface. This issue happened irregularly across many hours, yet it was something I immediately noticed when I couldnt solve the first puzzle due to assuming all text-adventure puzzles operated on an if-then relationship. (The solution was I had to type out the next action as its own input rather than the result from my previous actions.) When looking up the means to solve these problems, the solution was often in my hands all along, or I had solved two-thirds of the puzzle from rigorously examining and applying whatever verb I could imagine. Until I discovered the final missing information, the solutions were always more difficult than they should have been despite how logical most puzzles operate--or as logical as throwing a turtle at a window to get inside a building after youve tried everything else.

This dilemma can often happen in older text-adventures as they expected you to learn their terminology, yet if the challenge comes from understanding how to manipulate objects then a tutorial on verbs would help. CZK does have responses to let you know if the phrasing was off, and it does have a help section with a list of verbs. What it lacks is a safe-area to test your arsenal more comfortably before getting thrown into the deep end. For an example of this tutorial, Thaumistry begins with a test where you have to use look, read/examine, talk to/ask about, open, cast and optionally think to yourself in order to solve the challenge. These verbs arent the only ones, yet they provide a wide-range of options to make solving every puzzle feasible, and, if not, then there is the hint system, which offers three clues before telling you the solution. CZKs intro does make you utilize many similar verbs through guesswork; however, the think/topics only highlight conversational topics, not hints to help you understand or to remind you what is the problem. What it relies on instead are visual aids, the subtle references that can go over most peoples heads, and the look command, all of which can only provide so much.

He Did the Monster Mash, and It Was a Graveyard Smash 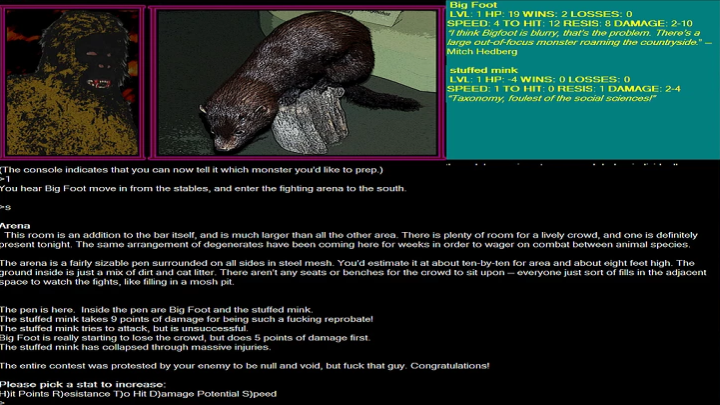 Outside of all the bizarre and deliberately dark elements of CZK, I do have to wonder how much subtext is lost on the modern audience as many of these pop-culture references--some of which are there to hint towards the solution--are so obscure you would need to dig six-feet into their graves. Even to someone like me who grew up on these oddities, I could feel the draft of the joke going over my head; however, the writing remains entertaining from the absurdity of every individual situation revolving around these four knuckleheads: a Crypitd hunter college dropout who is suffering from the 80s syndrome in modern times, a hypocritical deacon who somehow got roped into an alien conspiracy, a friend who does and says everything wrong at the worst times (Grimloft), and a no-nonsense woman named Jane set in a world of absolute silliness. With the added audio and still-frame visuals, it gives off the vibe of watching a monster B-movie where the campiness reaches a point where everything that can be called out as bad becomes another delightful quirk. 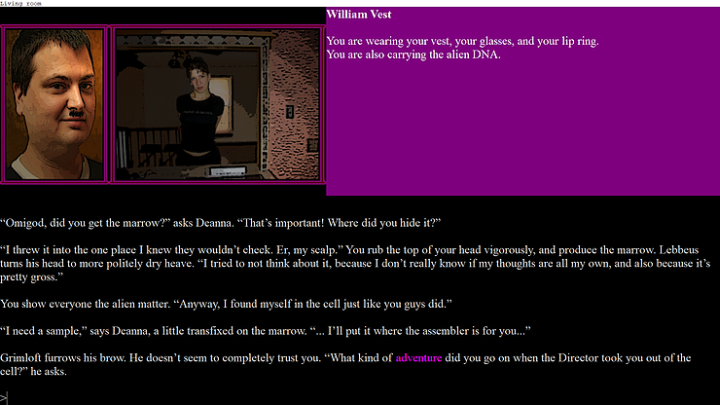 You know this type of guy in real-life, perhaps not with the Adolf-stache.

The one piece of subtext that resonated with me the most was the AD&D structure of its storytelling, which begins as all great adventures start with a group of heroes finding themselves in a tavern. The difference with CZK is instead of it being a heroic tale amongst beloved friends; its a conspiracy theory unraveled by people who despise one another. As Sherwin described his approach in his interview, A lot of fiction benefits from people arguing, and there is a little more of that in ND [Necrotic Drift], but I try to take it to an extreme in CZK [Cryptozookeeper], where there is more or less open hostility between everyone. In CZK, friends will flee to let the straggler deal with a monster; these friends will also forget to keep the locked door pried open; some friends will say obscene or creepy things to get under their skin or to have a laugh, and these people will fight each other as much as their common enemies. Honestly, this is the most entertaining quality of the game as you never really want to save these people out of goodwill but more-so to see what shenanigans theyll get into next. You might compare this narrative with A Hitchhikers Guide to the Galaxy, except a lot more raunchier and a lot more despicable--and that makes it all the more endearing to watch them suffer. 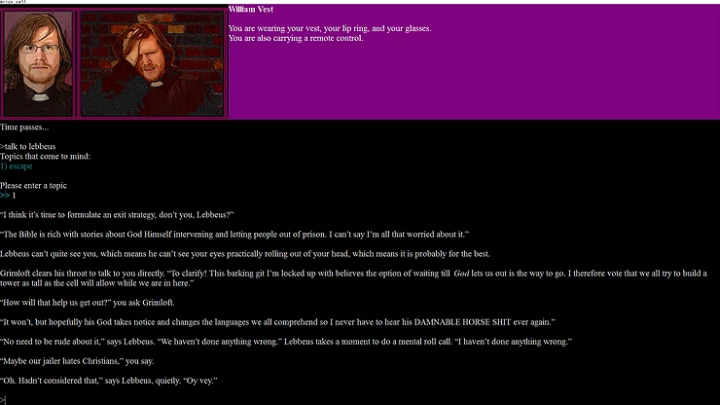 You may think he's unfaithful; in reality, he's a man of many faiths.

Considering how much care and attention to detail is put into the adventure game side of CZK, I do have to wonder what purpose the RPG fighting system serves other than to pad the game out for some lite dark-comedy cockfighting. Its admittedly funny the first time Bigfoot smashes a creature, and the combinations you can unlock provide very memorable creatures that rival Pokémon; however, when you have a shallower combat system than Pokémon that should say something. The whole Cryptid system is perhaps the only flawed part of CZK due to how much padding it serves to grind creatures to the next level, but I never found a reason to do so as most encounters did not rely on these stats. Its not as if the game needed more runtime as it will take you a good ten to fifteen hours to complete it as the obtuseness of its puzzles and the stellar writing will keep you captivated all night long.

You May Appreciate It Now, But Your Therapy Costs Won't Be Kind

Given how bizarre of a concoction is this game--a text-adventure about cryptozoology full of dark-comedy as well as the most bare-bones RPG fighting mechanics brought into one Frankenstein creation--the question of who this game will appeal to perhaps mirrors the same personalities from the game. (Or perhaps weirdos like yourself who read this entire review because the game peaked your interest.) By no means would I recommend this game to newcomers to text-adventures as its obtuseness makes it tougher to tolerate, yet I would recommend it even if you dont like this genre. The writing quality and the humor are strong enough to carry whatever mixed emotions you may feel towards this thing from the shadows, and its logical puzzles--when properly conveyed to the player--should be looked at how to create memorable puzzles that enhance, not detract from, the narrative. If anything can be said about Cryptozookeeper, it will forever change how you see the world; never will the world appear the same as you ponder what strangeness you may often find among your fellow men rather than the creatures of the unknown.

If you enjoyed this Cryptozookeeper review, you're encouraged to discuss it with the author and with other members of the site's community. If you don't already have an HonestGamers account, you can sign up for one in a snap. Thank you for reading!

© 1998-2022 HonestGamers
None of the material contained within this site may be reproduced in any conceivable fashion without permission from the author(s) of said material. This site is not sponsored or endorsed by Nintendo, Sega, Sony, Microsoft, or any other such party. Cryptozookeeper is a registered trademark of its copyright holder. This site makes no claim to Cryptozookeeper, its characters, screenshots, artwork, music, or any intellectual property contained within. Opinions expressed on this site do not necessarily represent the opinion of site staff or sponsors. Staff and freelance reviews are typically written based on time spent with a retail review copy or review key for the game that is provided by its publisher.