Game Tengoku CruisinMix Special is the most Japanese game I've played in a long time. (I mean, it starts with the title.) It's a top-down shooter which was originally released in arcades... as a parody of arcade shooters (so meta). Shooter stories don't matter, but this one is too awesome and too Japanese not to mention: per the OVA companion video which came packaged with the Sega Saturn port, a half-naked dude walks into an arcade at closing time, and the female employee is saved by a little girl who absconds with her into an actual arcade game.

Game Tengoku was apparently big deal in its day and I gather that's a huge part of the draw of this reissue, but theres no nostalgia here for me, because I missed it the first time 'round. So if you're a fan and you don't feel the love from me, that's probably why. God knows I love shooters, and the wage-battle-inside-arcade-machines gimmick is undeniably a fun one. But is it enough to elevate this experience from simply passable? 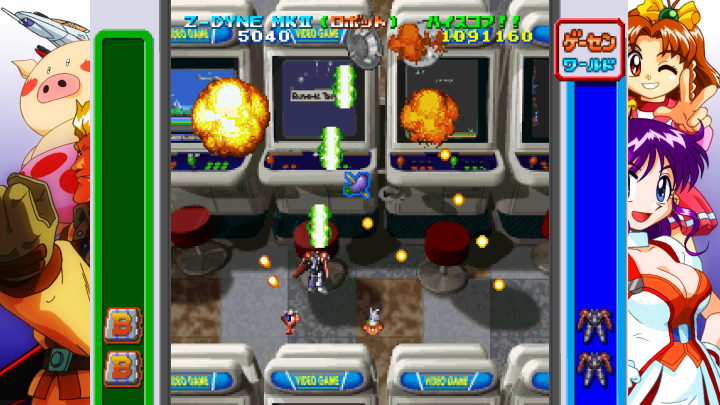 The gimmick, such as it is, begins with your ship doing fighting it out in an arcade. Youll start the first level off flying over and between cabinets before ultimately entering one (like foreplay, then). Challenges from Tetris puzzle pieces to pinball flippers and bells abound -- it's all admittedly awesome.

The coolness is offset to some degree by the presentation; the graphics are somewhat washed out and lacking in detail. While they are better, they do bring to mind for me an early effort at 3D shooting in Ginga Fukei Densetsu: Sapphire for the Turbografx-CD, released some years earlier. But on this more powerful hardware, the lack of a graphical detail and polish even for its time, is a bit disappointing.

For someone not enamoured of Game Tengoku's very real kitsch appeal, someone not sitting down to play with a boatload of nostalgia at their back, this will just feel like a decent, if slightly easy vertical shoot-em-up with unremarkable production values and weird quirks involving collecting eggplants for points to the tune of an annoying voice yelling out triumphantly each time you do. (Is it triumph? Who can be sure.) 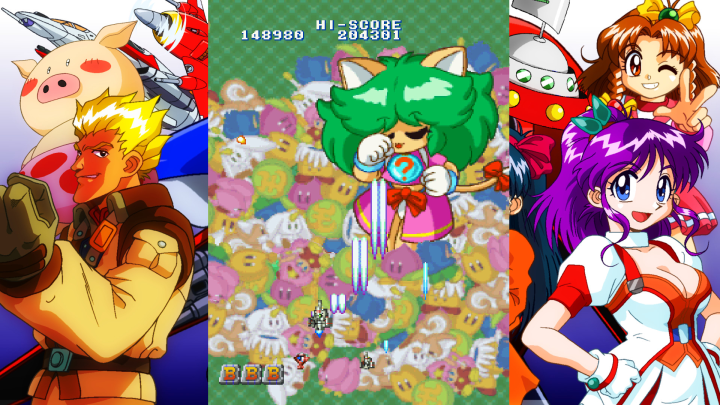 Another issue -- and I admit that I dont know whether or not the arcade and Saturn originals were similarly plagued -- is the horrendously distracting slowdown. When theres a lot of action on the screen, expect things to grind to a halt, making the game very difficult to play. And it's not the kind of slowdown that helps with your dodging, because it's not consistent; its the herky jerky variety which doesnt help anyone. (You can't blame my PC set up for this -- my rig ran the newest Tomb Raider trilogy without issue, so it should be able to run a simple 2D 90s shooter.)

All in all, Game Tengoku CruisinMix Special is a fun shooter with a cool gimmick that feels a bit... sparse, and is sadly plagued with slowdown, especially in the later levels. Unless youre a diehard fan, Id give it a miss. And even if you are, hold on to your Saturn copy, because Im certain (I'm really not, but I'm hopeful!) that it plays smoother than this version. This port holds value only for the true aficionados -- and I'm sure such a thing exists -- who need their Game Tengoku fix and cant get it anywhere else.

If you enjoyed this Game Tengoku CruisinMix review, you're encouraged to discuss it with the author and with other members of the site's community. If you don't already have an HonestGamers account, you can sign up for one in a snap. Thank you for reading!

© 1998 - 2023 HonestGamers
None of the material contained within this site may be reproduced in any conceivable fashion without permission from the author(s) of said material. This site is not sponsored or endorsed by Nintendo, Sega, Sony, Microsoft, or any other such party. Game Tengoku CruisinMix is a registered trademark of its copyright holder. This site makes no claim to Game Tengoku CruisinMix, its characters, screenshots, artwork, music, or any intellectual property contained within. Opinions expressed on this site do not necessarily represent the opinion of site staff or sponsors. Staff and freelance reviews are typically written based on time spent with a retail review copy or review key for the game that is provided by its publisher.