It does seem a bit odd that Hamster, the dev team handling the Arcade Archives and ACA Neo Geo ports, decided to release a "trivial" wrestling title in the same year as, if we're going by Japanese dates, Wonder Boy, Rygar, City Connection, and Scramble. Maybe the game's much more impactful than first impressions give off? Well, originally developed by Technos and published in 1985, Mat Mania pits your unnamed, red-haired wrestler against five opponents in order to become the champion of "TWA." Whether it be the mohawk, face-painted Insane Warrior or the subtly-named Karate Fighter, your man has an assortment of grappling moves to use on these contenders. One such example would be a punch or kick combo that can be chained into a hold, which can be segued into a throw. 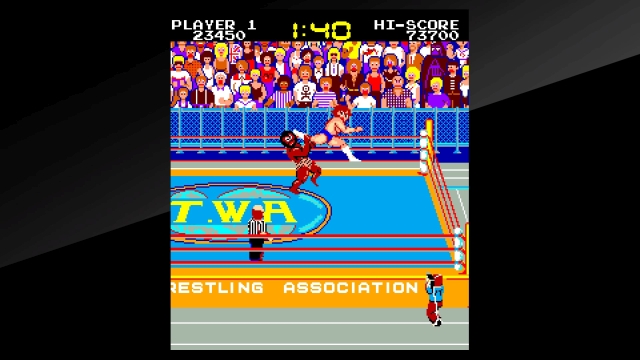 Furthermore, along with the flurry of hits, grabs, and throw combinations are an assortment of other wrestling moves. Push your rival to the ropes, then either knock them down with an elbow flying kick or toss them over your back. Or, if they happen to be in the right spot on the ground, climb one of the poles and quickly perform an aerial attack before they recover. These... well, these are all typical wrestling moves; but being fair to the game, what make these techniques work especially well here is how easy it is to transition seamlessly from one move to the next. There's no awkward delays, which is good considering the strict time limit of three in-game minutes. It certainly creates a frantic atmosphere, trying to whittle your opponent's invisible stamina so you can successfully pin them for three seconds before the clock hits zero.

With all that said... it still sounds like a really standard wrestling title.

However, behind this simple game comes quite an interesting bit of trivia. The aforementioned developer, Technos, played a key part in 1980s video game history. A year after publishing Mat Mania, in 1986, these devs released Renegade, an instrumental title in the beat 'em up genre; numerous moves to use, several opponents on screen at once, and all this while navigating on isometric plains. Approximately a year after that, Technos then unleashed one of the most well-known beat 'em ups in the world: Double Dragon. Why am I putting such emphasis on these two games? Because while Mat Mania is not a beat 'em up by conventional standards, its contributions to the genre are huge, considering Renegade and Double Dragon mechanics heavily borrow from this title.

Now, when compared to its immediate spiritual successor, Mat Mania does something that threw me for a loop: not only does it feel better to play, but it's more entertaining than Renegade. Surprising... until I gave it some thought. With Renegade, the game clutters the screen with ruthless enemies who constantly break combos and sneak up behind for a grab, expecting players to take them all on within a two minute limit. However, these issues are almost nonexistent in Mat Mania, due to the mechanics being on display in a straightforward, one-on-one brawl. There's more breathing room, giving the mechanics more time to shine, thus allowing players an opportunity to enjoy the actual slug fest. When you grab an opponent, push them to-and-from the ropes, perform a flying kick, and then land a three-count pin in succession, it feels good. 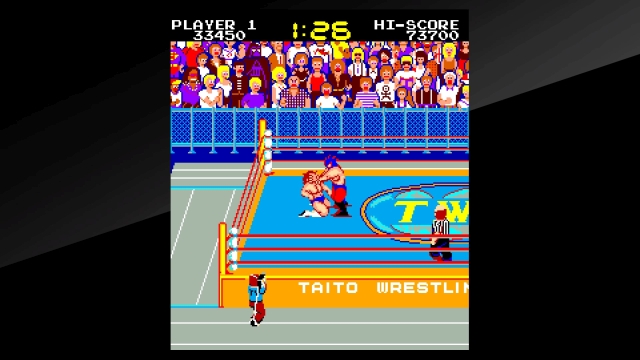 So, is the Arcade Archives edition a must-buy for your digital collection? While it's commendable in comparison to Renegade's rigid, harsh style, it's still a pretty standard wrestler, one with five quick matches, and is downright archaic when contrast with modern wrestling titles. I also think Hamster goofed on this release, because there's a revision of Mat Mania with extra techniques and an optional two-player mode... which isn't included here. If Hamster was capable of shoving five different versions into their Gradius II port, then what's the problem here? Mat Mania is an interesting piece of video game history that helped define a genre for generations, but it's one that should only exist within a collection, not a standalone release.

If you enjoyed this Arcade Archives: Mat Mania Exciting Hour review, you're encouraged to discuss it with the author and with other members of the site's community. If you don't already have an HonestGamers account, you can sign up for one in a snap. Thank you for reading!

© 1998-2021 HonestGamers
None of the material contained within this site may be reproduced in any conceivable fashion without permission from the author(s) of said material. This site is not sponsored or endorsed by Nintendo, Sega, Sony, Microsoft, or any other such party. Arcade Archives: Mat Mania Exciting Hour is a registered trademark of its copyright holder. This site makes no claim to Arcade Archives: Mat Mania Exciting Hour, its characters, screenshots, artwork, music, or any intellectual property contained within. Opinions expressed on this site do not necessarily represent the opinion of site staff or sponsors. Staff and freelance reviews are typically written based on time spent with a retail review copy or review key for the game that is provided by its publisher.