Heavy Burger is the bastard lovechild of Smash TV and Nidhogg. Its a game where up to four players might grab a pixel-generated bag of swag, and then run a gauntlet through various screens in an attempt to deposit it into a bank for the win. The banks run by the same President of the United States who you save at the end of Bad Dudes vs The Dragon Ninja. The one who takes his rescuers out for cheeseburgers as way of thanks. Sanity allowing, well circle back to that.

The easiest comparison is to Nidhogg: a two-player-fencing-gauntlet-runner-thing, where you have to slip past the opposing player enough to pass a number of consecutive screens. You get to the end, and you win. But the other player doesnt want you to win, so can stab you at any time, and start running in the other direction. The further a person advances, the more lost ground the other has to make up to pull a comeback. Heavy Burger is similar to that. Except instead of running through chains of generic backgrounds, each time you successfully manage to slip past your opponent and move on to the next screen, what youre actually doing is jumping to a new old-school Data East arcade cabinet. And instead of having something as passé as swords, youre fitted with a hand cannon that shoots mouth-watering hamburgers.

Each new cabinet is viewed as a top down arena (like that other game I compared it to, Smash TV!) To begin with, its all pretty simple; the first stage simply has the swag bag dropped into a pitfall-surrounded platform in the middle of the room and has the main threat consists of the enemy player. Who can and will shoot you. 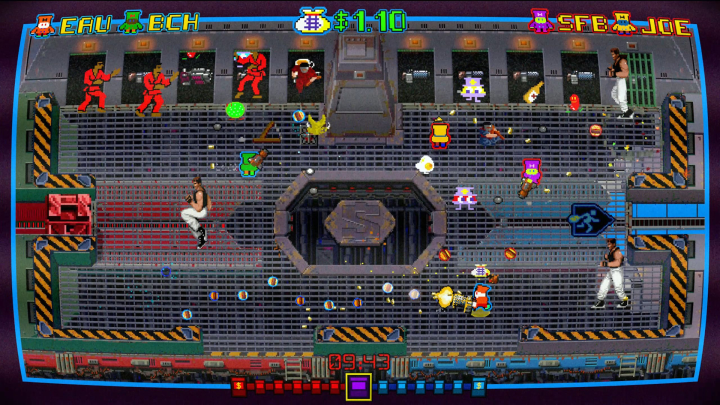 The ideal plan is to navigate the pitfall (you can wait for a timed platform to rise so you can walk over there like a desperate slacker, or you can hurl yourself over the death gap with a tap of your dodge command), snatch the money bag, then leg it out the exit on the opposite end of the room. Jumping into Karate Champ, Bad Dudes, Heavy Barrel, Lock n Chase, Burgertime, or Side Pocket. These new environments mean that the idiot at the other side of the room pelting you with beef-like patties immediately stops being the most pressing danger you face.

Think Wreck-It Ralph for a second. Imagine if one game was lifted and placed in the environment of another and how they might coexist. At heart, Heavy Burger is never going to be anything but a top down arena shooter, so what happens when it finds itself transported to something like Burger Time, a game about constructing hamburgers? You still have to deal with the pesky little git pelting you with deadly fast food, but now you also need to contend with burgers being constructed around you. Bits of burger bun, lettuce leafs and the like fall from the top of the screen. Or sentient fried eggs grow stick-like appendages and chasing you around the screen. So you need to dodge all that as well.

Some cabinets work better than others. The one that works the best is the one youd probably least expect. Side Pocket was a billiards simulator released back in 1986; billiards, of course, being most famous as the sport least likely to provide a chaotic environment for a top down arena shooter. But its great; shooting at the massive balls is often much more productive than trying to plug your opponent, because with a forceful enough prompt, it can send them ricocheting around the table/arena like unpredictable death traps with +2 crushing. 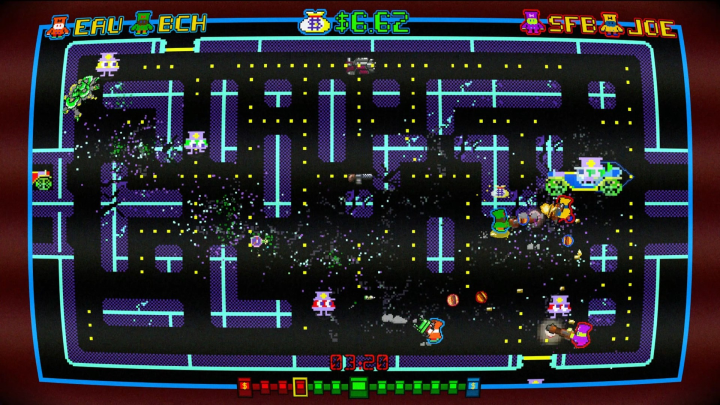 The other cabinets more or less let their respective sprites run wild, causing you no small inconvenience. But they dont take sides, so youre still trying to stop your opposite numbers advance, or try to avoid their efforts to stop you, all while Karate Champs martial arts enthusiasts try to kick you in the face or trying to get through Lock n Chases totally-not-a-Pac-Man-maze. Which is an annoyingly claustrophobic change of scene from the other more open plans stages for about a minute before you realise you can just shoot the walls down and mow right through the middle if you so please.

Theres an appreciated bot mode included, but Heavy Burger is primarily built for multiplayer couch gaming. It helps if youre into all the retro arcade cabinets it so lovingly dusts off and inserts new relevance into but, honestly, it doesnt really matter if youve never entered an arcade in your life. The idea behind Heavy Burger is neither overly complex nor particularly original, but the way it recycles a forgotten draw of abandoned assets into something new is executed brilliantly. I only spent a mentionable amount of time with a few of the titles (just enough to decide that I wanted to launch Karate Champ into the centre of the sun, for instance, and it turned out I was indeed a bad enough dude to rescue the president back in the day). Doesnt matter; the arcade-hopping mechanic grinds on endlessly in the background while you desperately lurch forward towards uncertain victory of defend desperately in the hopes of securing a dramatic comeback victory. Get to the last arena, bypass the dragon ninja, cross the busy road and deposit your swag bag in the bank. The President himself is waiting for you and offers you a hearty laugh and the invitation to go grab a cheeseburger with him. Because of course he does. 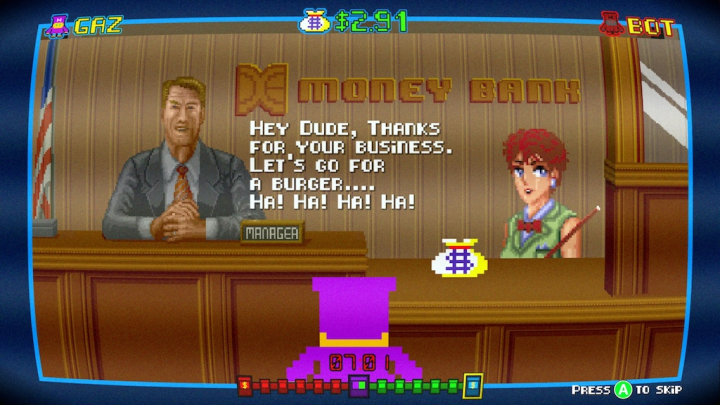 If you enjoyed this Heavy Burger review, you're encouraged to discuss it with the author and with other members of the site's community. If you don't already have an HonestGamers account, you can sign up for one in a snap. Thank you for reading!

© 1998-2022 HonestGamers
None of the material contained within this site may be reproduced in any conceivable fashion without permission from the author(s) of said material. This site is not sponsored or endorsed by Nintendo, Sega, Sony, Microsoft, or any other such party. Heavy Burger is a registered trademark of its copyright holder. This site makes no claim to Heavy Burger, its characters, screenshots, artwork, music, or any intellectual property contained within. Opinions expressed on this site do not necessarily represent the opinion of site staff or sponsors. Staff and freelance reviews are typically written based on time spent with a retail review copy or review key for the game that is provided by its publisher.