Whenever I scrolled through the Arcade portion of Xbox Live's store, I would instinctively avoid Triggerheart Execlica. Not that I have a deep-rooted hatred for the vertical shoot 'em up or anything like that, but whenever I read its description and looked at the supplied screenshots, it just came off as a very, very typical shoot 'em up experience. Sci-fi theme. Check. Alien invasion. Check. Super-powered female protagonists. Check. Bullet hell onslaught featuring pink, red, and purple projectiles filling the screen in spreadshot, diamond-shaped, or tropical depression variations. Check. It doesn't sound like a bad time to be had, but with so many more "inviting" titles gracing the Arcade library, Triggerheart always played second fiddle.

But upon finally giving it a chance, reading the How to Play and tutorial portions, something surprised me: this game has a gimmick. Why this wasn't mentioned at all in the store description--that vital place where you really need to convince people to buy your product--is beyond my understanding. 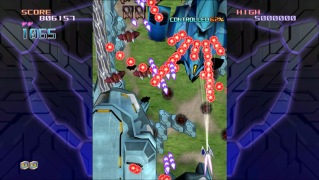 Now, being the big, burly, unbeatable human-being that you are, you can just play Triggerheart normally and dodge every bullet that comes your way, but the devs have included an alternative method for handling these constant, hectic threats. Your flying robot character has an anchor she can shoot with the press of a button, capturing enemy ships on contact. And once grabbed, you then automatically start spinning around with the captured enemy like an idiot. Stick with me here. If you time the release correctly, you can toss the enemy into formations, effectively destroying them and any projectiles within its path. Smaller ships are able to be grabbed right away, while bigger ones require filling a percentage bar before capture is finalized, the latter leading to some interesting strife scenarios due to your avatar's decreased movement.

Using this ability is simply an option in most cases, but the game clearly wants it to be used a lot. This is especially evident when you realize normal and "screen-clearing" bomb attacks are actually underwhelming when an army of ships and projectiles clutter the field. Bombs clean the screen of projectiles and smaller ships, but bigger ships are barely phased; compare this to a successful toss attack, which destroys large ships instantly. Using the anchor is especially emphasized later on, when literal walls of opponents and bullets engulf the screen. If you don't grab an enemy and fling accurately in these moments, you'll feel the pain. There's an option to manually swing the anchor if you want more control, but it does require a bit more concentration, due to constant threats surrounding you.

While this sounds like an interesting mechanic for a shoot 'em up, Triggerheart's overall design underwhelms the concept. Yeah, the action is occasionally frantic, but the chaos is actually tame for bullet hell standards... I would even say, in many areas, it's tame for normal shoot 'em up standards. You get ship waves coming from the top in typical order: formation of small ships, an occasional big ship, some tanks, more small ships, and then formations of big and small ships until the boss arrives. That's most of the game in a nutshell. Doesn't help that there aren't that many enemy types. That, or ship designs are so generic, it's actually hard distinguishing them from one another. The devs don't even introduce many interesting ideas for the anchor, as well. You remember that wall example I gave earlier? That's their best. Granted, it's definitely pressuring, but... that's the peak? What's more, despite the Live Arcade's improvements over previous incarnations, such as HD visuals, new music, and online leaderboards, a few things have actually been stripped. Missing from this port are two modes originally featured in the Japanese Dreamcast release, one with extra story dialogue, and the other where everything is harder and with no continues. Not the greatest of loses, but something to note if you're thinking this to be a "complete" release.

Ultimately, the thing that's frustrating about Triggerheart is this: it doesn't do anything great, but it doesn't do anything necessarily terrible, either. It feels like the devs went through a checklist of elements that make a shoot 'em up... a shoot 'em up, and just made a straightforward one without attempting improvements. In a genre known for its chaotic pacing, clever designs, and interesting concepts, the worst someone can do is "accidentally" make a routine shooter around the frantic action and unique ideas. However, Triggerheart Exelica pulls off such a feat.

If you enjoyed this Triggerheart Exelica review, you're encouraged to discuss it with the author and with other members of the site's community. If you don't already have an HonestGamers account, you can sign up for one in a snap. Thank you for reading!

© 1998-2021 HonestGamers
None of the material contained within this site may be reproduced in any conceivable fashion without permission from the author(s) of said material. This site is not sponsored or endorsed by Nintendo, Sega, Sony, Microsoft, or any other such party. Triggerheart Exelica is a registered trademark of its copyright holder. This site makes no claim to Triggerheart Exelica, its characters, screenshots, artwork, music, or any intellectual property contained within. Opinions expressed on this site do not necessarily represent the opinion of site staff or sponsors. Staff and freelance reviews are typically written based on time spent with a retail review copy or review key for the game that is provided by its publisher.