So. Freaking. Good. Oh, Im sorry, that wasnt very clinical or analytical of me to say, but Mike Bithell has once again formulated and executed a fascinating discussion revolving around morality, agency and responsibility. Minimalist gaming does appear to be his forte, and Subsurface Circle excels in every facet. Enough gushing, I need to take a moment to tell you just why, without spoiling anything.

Bithell seems to have the capability to cut just the right corners and assemble a talented team that results in a highly polished experience. Just envision a simplified yet nearly photorealistic world consisting of robots built to serve different roles, such as Priest, Worker, Soldier, and so on. You assume the role of a Detective between cases who is presented a problem, and then you are tasked to pursue it. 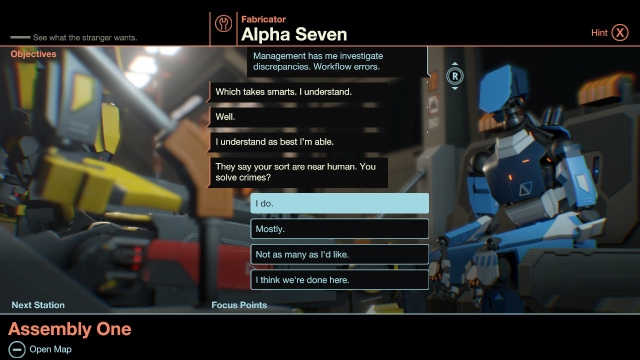 You see, this is a branching text adventure with style and atmosphere outside of your own head. The faceless characters allow you to project yourself into the protagonist, and then choose your communication style. You can be grumpy and fed up or upbeat and casual, and though youll explore the same focus points as every other player, you will still feel satisfied with the confrontation of the story arc and its final gateway.

The brilliance of this game is its subtleties, and I look forward to more in the future, hopefully coming soon to the Switch. Be aware this is a short, to the tune of less than two hours. For someone as interested in Artificial Intelligence and robots as myself, this was valuable enough to play it through it three times, once before plunking down to tap out my perspective on the subject matter. 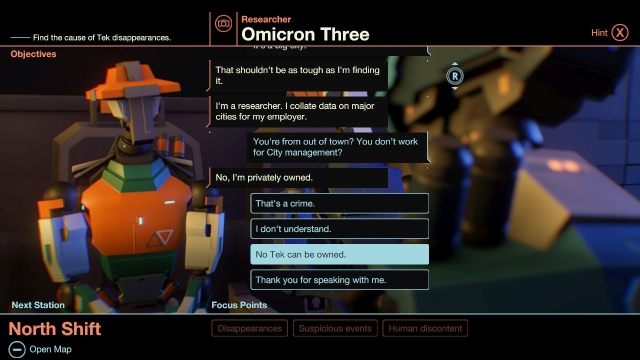 The graphics and music arent fluff as much as they are a side dish. The meat of this content is easily the conversations youll be having with the Teks that board and leave the train at particular, and curious, intervals. What begins as a small matter of worry mounts up to ... something very large, and while I saw it coming, boy am I interested in what else Bithell will have to write on this subject.

In essence this is a teaser, and a narratively strong one. At first, getting used to the context of Bithells fictional reality took some adjustments, but your mistakes as a player are easily forgiven by how the game was designed. Much like the subway train rounding the underground rail, dialog trees cycle naturally back to the next step, regardless of how confused you might be. 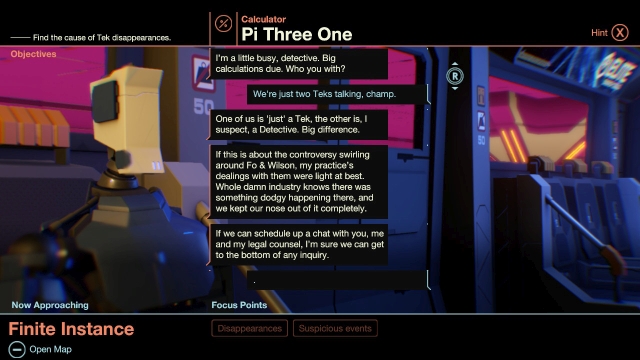 Admittedly, though, I did need the Hint function at least once during my first playthrough, and I did appreciate the Deductive Reasoning Assistance function for one logic puzzle in particular. At some point the names, colours and heights all become math and become difficult for me to track, even on paper. But dont take your word for it. If you play the game, come back and reread this review. Im sure youll agree.

If not, whats it like to be that smart?

Interestingly enough, that too is part of the matters at hand, though the subtext is really - if you cant handle it, then who can? Apparently Teks have embraced religion, after a fashion, and that is another point of fascination. After establishing how deep a discussion this is, what else can I say? 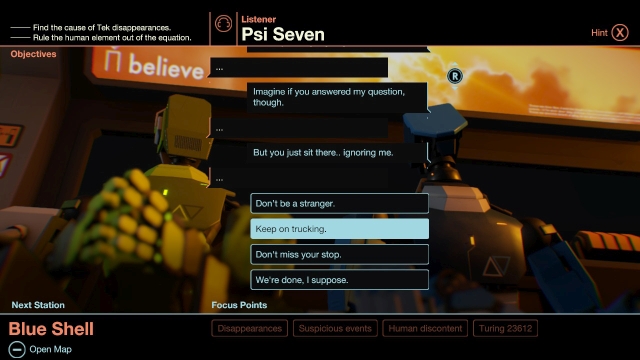 I mentioned that visually, Subsurface Circular has a lot of style. Thats a misnomer. What I mean is flare for details. Robots that do nothing but listen to music provide a break in the never ending stream of dialog, but the way Bithell breaks up conversations does feel natural, if somewhat more logical than you may be accustomed to. It is thematically appropriate, though, considering theyre robots.

Speaking of details, in stories you have chapters that are represented here as Stations which employ technical play on words. It's a useful way to hone the seriousness of the situation. How does one apply enough gravitas to a story about death without showing you a single body? In a way you dont. By allowing me to play my attitude, even as a "voiced" protagonist, the story becomes personal to me, and thats what sells it. 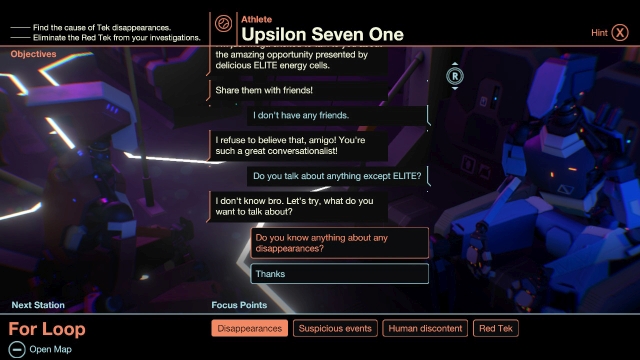 If youve ever wondered how an A.I. feels about pitching sales ads to everyone they meet, among other things, this game amusingly broaches that subject. Bithells writing is sharp, exact in tone to the extent of having just the right amount of levity not to unbalance the narrative. The included concept artwork is a bonus that merely compliments this edifying examination of what A.I. could mean to us and our culture.

If you enjoyed this Subsurface Circular review, you're encouraged to discuss it with the author and with other members of the site's community. If you don't already have an HonestGamers account, you can sign up for one in a snap. Thank you for reading!

© 1998-2022 HonestGamers
None of the material contained within this site may be reproduced in any conceivable fashion without permission from the author(s) of said material. This site is not sponsored or endorsed by Nintendo, Sega, Sony, Microsoft, or any other such party. Subsurface Circular is a registered trademark of its copyright holder. This site makes no claim to Subsurface Circular, its characters, screenshots, artwork, music, or any intellectual property contained within. Opinions expressed on this site do not necessarily represent the opinion of site staff or sponsors. Staff and freelance reviews are typically written based on time spent with a retail review copy or review key for the game that is provided by its publisher.