We all know this story, especially those of us who count the 2D shoot-em-up among our favourite genres: the tale of the game with the oversized reputation it doesn't deserve, whether for better or worse. Elemental Master is one of these games.

It was made by Technosoft, the same developer responsible for the perennial horizontal shoot-em-up series, Thunder Force. And so, quite unfairly, Elemental Master, Technosoft's top-down shooter effort of the same vintage, is often compared to Thunder Force. That comparison seems to have created two sets of fans. Those who are just upset that Elemental Master isn't its better known sibling, and as such, is a failure on that basis alone -- and those who champion this game to unreasonable degrees, ostensibly in an attempt to offset the other groups criticisms.

The die-hards elevate Elemental Master to a legendary status that it probably doesn't deserve. And to be fair, it doesn't deserve the Thunder Force-fueled flak either. What we have here is a pretty good vertical shoot-em-up sporting a cool twist: in place of a spaceship armed to the teeth, our on-screen avatar is a dude on foot, hurling magic. 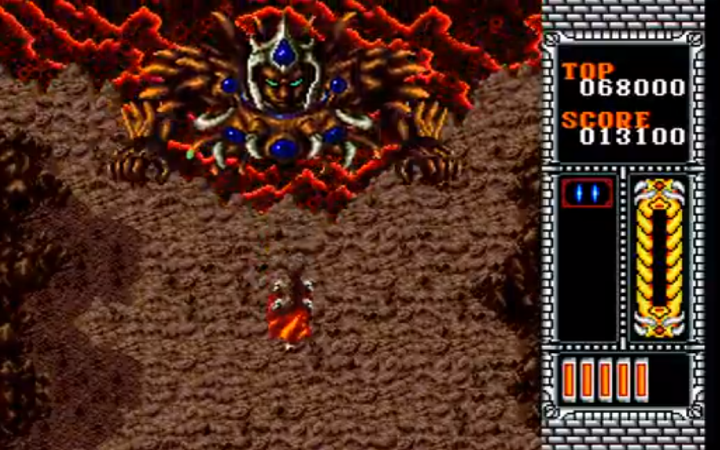 Notwithstanding my hand-wringing about unfair comparisons, Elemental Master does give us glimpses of the Thunder Force blueprint. The way the designers handled fire and lava reminds us of the celebrated third game. The gargoyle-inspired, multi-headed boss reminds us of that same game's level one guardian. The way the first four stages are offered for us at once so that we can select the order that we tackle them in, reminds us of the venerable Lightening Force, released the same year. And finally, the way the game offers an impressive arsenal of weapons to chose between at any given time, is a staple across the entire canon.

Even some of Elemental Master's sound effects will sound familiar (the same composer was on board), as will its general visual style. That said, the quality is definitely not on par with the rest of Technosoft's offerings: both the graphics and sounds are unremarkable even for their time. Unfortunately, the game can't lean on intensity as shmups often do to distract us from this fact. Any shooter veteran will blow through the first four levels without issue, before stage five sees a slight uptick in difficulty. But all of a sudden, with level six and level seven, shit gets real. While the sixth chapter provides some frantic moments for the first time, it's really stage seven's inevitable boss gauntlet which might have you quite suddenly and violently hating a game you were so recently breezing through.

You see, Elemental Master is one of those shooters that features a vitality bar. And that's a good thing, since you only have one life, and a handful of continues. None of this is troublesome until the near end of the game. I actually managed to beat the first five levels before I even realized that you could shoot backwards. It turns out our conjurer-cum-foot soldier hero, can fire any one of his weapons both forward and backwards. I didn't find there were so many problematic enemies sneak-attacking from the rear that I needed this function -- until, again, the later levels came along. 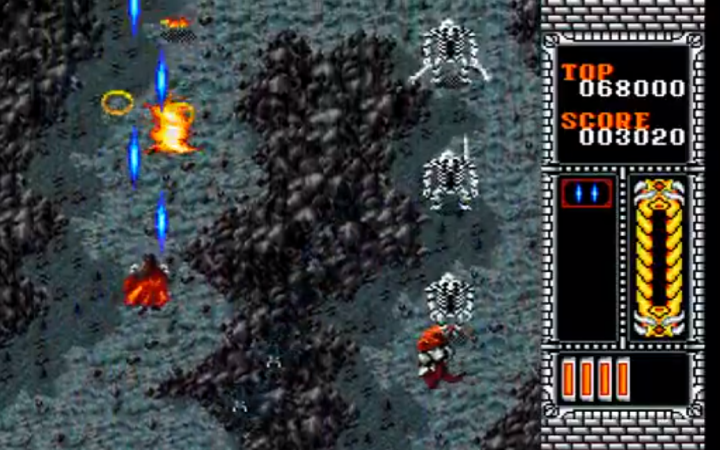 Similarly, I didn't stop to consider how helpful multiple lives and in-level checkpoints would be until the last level chewed me up. Besides the more difficult enemies, the environmental hazards (damn those swinging morningstars!), and the host of previously enjoyed bosses beset upon you -- the last boss will present tricky, multiple forms. And of course it does: that's what last bosses do. So you might be halfway through beating the last boss' final form, your vitality whittling away under the pressure of confounding projectile patterns, and when you ultimately succumb, it's back to the beginning of the level for you. Two such displacements more, and it's back to the title screen. Remember I told you the game had limited continues? Yeah.

And so Elemental Master is a game that plays loose and forgiving in the early going, offering up interesting locales and easy, breezy, mindless vertical shooting action, until all hell breaks loose, and the game suddenly becomes an asshole. I am reminded of many games of this era, where something similar takes place: where uneven level design and challenge manifests in an experience where are you flying through early sequences, stacking extra lives where you can, only to spend all of that currency in desperation at the ultimate showdown where it all falls apart for you. Again, Elemental Master presents a slightly above average time all around, offering somewhat toothless early action that culminates in an obstinate, obnoxious climax that you may not completely see through. All that said, it is still worth a try. It's just not as significant a game as it has been made out to be by both its fans and critics alike.

If you enjoyed this Elemental Master review, you're encouraged to discuss it with the author and with other members of the site's community. If you don't already have an HonestGamers account, you can sign up for one in a snap. Thank you for reading!

© 1998-2021 HonestGamers
None of the material contained within this site may be reproduced in any conceivable fashion without permission from the author(s) of said material. This site is not sponsored or endorsed by Nintendo, Sega, Sony, Microsoft, or any other such party. Elemental Master is a registered trademark of its copyright holder. This site makes no claim to Elemental Master, its characters, screenshots, artwork, music, or any intellectual property contained within. Opinions expressed on this site do not necessarily represent the opinion of site staff or sponsors. Staff and freelance reviews are typically written based on time spent with a retail review copy or review key for the game that is provided by its publisher.