Theres not much of an argument to be made on what killed the arcades; home consoles slowly but surely kept advancing. The power gap between couch gaming and arcade gaming used to be immense, but when the choice came between sitting at home and, urgh, going outside, we all ordered pizzas and powered up the Playstations. The last big boom for the arcades was probably during the 16-bit era, when consoles like the Mega Drive and the SNES did decent jobs of copying coin-ops, but still couldnt match them. When there was a system that could trade specs, like the lesser-spotted Neo-Geo, you were required to remortgage your house to afford it.

Safely nestled within that little bubble sat NBA Jam, a two-on-two basketball game that neatly encompassed everything great about arcade play. It offered fast paced, over-exaggerated bursts of adrenaline, backdroped to cartoon goofiness and dorky catchphrases yelled over commentary. You could take on the computer AI, but what was the point? You took on friends, picked your team and tried to kneecap physics with all the ridiculous dunks you mashed in their stupid faces. Sure, there were options there to defend; you could try to steal, or to block shots, but it was a game based on rocketing forwarded and racking up outrageous points. Because the games were short, you would keep pumping coins into the cabinet to either extend your bragging rights or to try and get revenge. 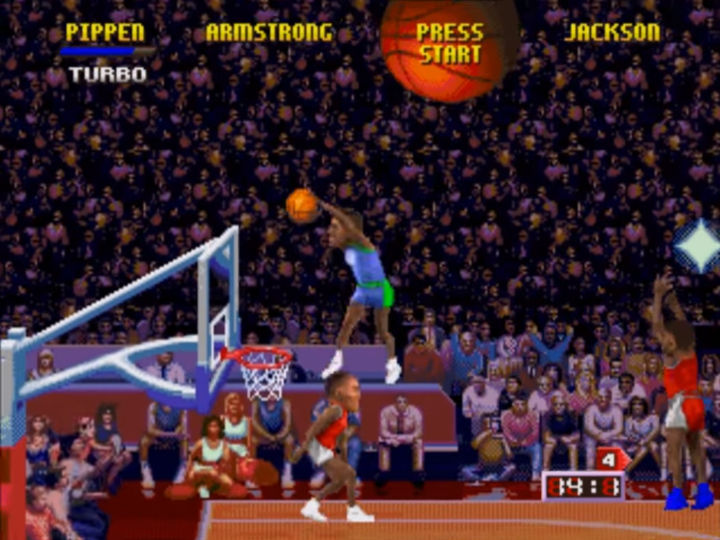 It was a game that thrived in the arcades because while brave attempts to bring this to the home consoles where made, they couldnt stack up. The 16-bit machines didnt have it in them to fully feature the smack-talking commentator, whose small but enthusiastic collections of comments gave greater meaning to every action. It struggled to maintain the size, the scope, the speed; their efforts amounted to a decent time and a good version when viewed in context with the power gulf between the two mediums, but players still flocked to the arcades to let the cabinets devour their small change in droves. It was the superior option.

By the time the sort-of-sequel-sort-of-update, NBA Jam: Tournament Edition rolled out two years later, the landscape was starting to change. 32-bit was now a thing and machines that could at least keep touch with the power of arcade cabinets were starting to develop. In a rare and somewhat secret victory, SEGAs Saturn pulled off an almost impeccable port, thanks to being able to scale 2D sprites better than Sonys 3D obsessed Playstation could. But issues remained; the new jump to CD-based gaming brought along many benefits, but not among them was the increased loading times and much glaring at an unresponsive screen.

But there was another option. A secretly very good option known about by only a select few.

NBA Jam: Tournament Edition on the 32X just happens to be a very faithful port. Its not as quite on point as the Saturn version; its not able to scale the sprites as well, nor can it hope to match CD audio qualities, relegating the juicy BGM and mocking commentary to also-rans, but its responsive, detailed and hectic in a way the 16-bit crowd could only hope to be. All that without twenty seconds of impatient tutting and eye rolls between every period while a disc chugs away, noisily loading. The new features ushered in with the Tournament Edition all make an appearance; the expanded rosters, the hidden characters. It introduced Hot Spots to the court, letting players that took shots from inside highlighted sections score extra points should they sink the basket. It snuck in power-ups that would set your ballers on fire  a souped-up state previously reserved for a player making three consecutive throws. 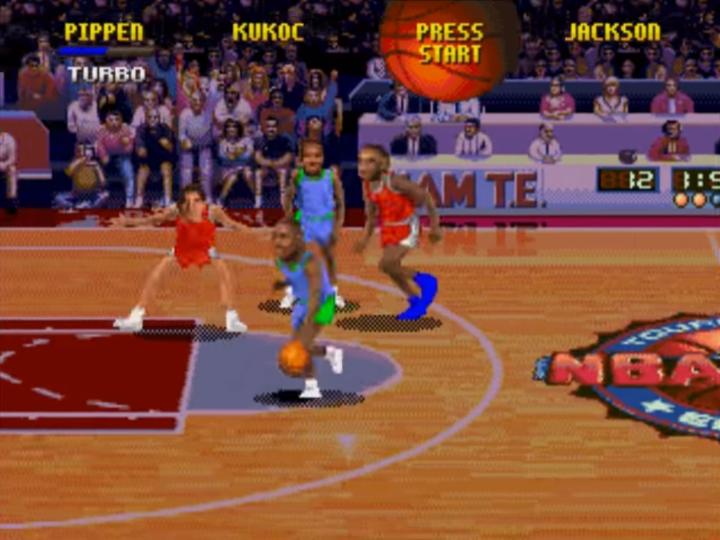 Or you can banish all that nonsense and just select the Tournament mode, where the game tries its level best to play it straight. Or as straight as any game with a commentator screaming BOOMSHAKALAKA! as a regular occurrence could.

This transitional period was good for NBA Jam as a whole, featuring heavily in the last big generation of arcade games before the home market ate it up wholesale. Perhaps because of this, it managed to gain an amount of traction that similar games such as Arch Rivals, Shut Up & Jam and Double Dribble couldnt sustain. But it was to be all downhill from there. Weirdly, the developer, arcade powerhouse Midway, lost the license to their publisher, Acclaim, who managed to bugger it all up for everyone. Keen to get a foothold in the new home markets, it kowtowed to Sony demands who went through a very puzzling period where they refused to allow any non-3D game on their machine. And so NBA Jam Extreme was born. It was shit, no one bought it, and the Jam name quietly faded into memory. It tried to come back again in 2003, giving you an extra player for some 3-on-3 games, but it felt like it was missing the point of the original, and did pretty poorly, too.

And then, like the Grinch catching the Xmas spirit and momentarily forgetting he was the worlds biggest jerk, along came EA. In 2010, they rounded up a lot of the original development team and put out a new game that stayed true and honest to the original. It was met with critical success, was beloved by players of the original, and found a whole new fanbase thanks to its frantic action and open accessibility. And then, as suddenly as it arrived, it was dead again. EA remembered who they were and put a stop to all that appeasing their customers nonsense and got hard at work screwing over that developer you used to really like and finding new and painful ways insert loot boxes. Whether Belgium likes it or not.

If you enjoyed this NBA Jam Tournament Edition review, you're encouraged to discuss it with the author and with other members of the site's community. If you don't already have an HonestGamers account, you can sign up for one in a snap. Thank you for reading!

© 1998-2021 HonestGamers
None of the material contained within this site may be reproduced in any conceivable fashion without permission from the author(s) of said material. This site is not sponsored or endorsed by Nintendo, Sega, Sony, Microsoft, or any other such party. NBA Jam Tournament Edition is a registered trademark of its copyright holder. This site makes no claim to NBA Jam Tournament Edition, its characters, screenshots, artwork, music, or any intellectual property contained within. Opinions expressed on this site do not necessarily represent the opinion of site staff or sponsors. Staff and freelance reviews are typically written based on time spent with a retail review copy or review key for the game that is provided by its publisher.