With the Arcade Archives reissue of Double Dragon, the port team, Hamster, has given newcomers the opportunity to experience the beat 'em up exploits of the Lee brothers, as well as wax nostalgia for long-time gamers. Martial artists in a post-apocalyptic world, Billy and Jimmy Lee have taken to streets, factories, and forest trails against the Black Warriors, in sturdy, hot-blooded, Kenshiro-esque battles to the death. Oh, and to rescue their love interest, I guess. All this as everyone dons sexy 80s "fashion" wear, from spiked armbands and tight spandex, to outright shirtlessness for the world to see! 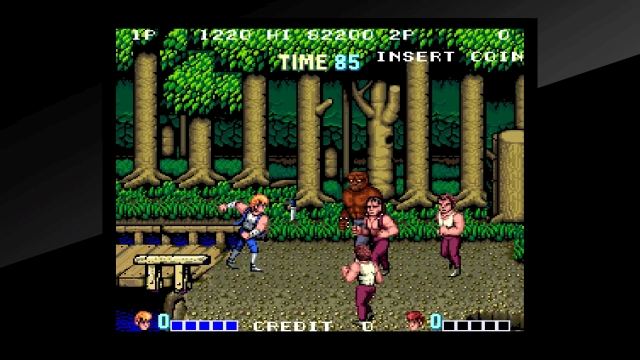 But why make such a big deal about a release that came out decades ago and has since been surpassed in quality by countless other games? Well, significantly, it helped mold what many consider to be vital aspects of the beat 'em up genre that are still prevalent to this day. "Basic stuff" like continuing on the spot after losing a life, using a variety of weapons lying on the ground or dropped by enemies, and two-button special moves. Not to mention a certain "itty-bitty" feature called cooperative play. And while it seems like this game came out of nowhere with all these refined features, Double Dragon is forever indebted to its spiritual predecessor, Renegade, for being a flawed title; you can't continue on the spot after death, even after adding a credit, have to play on a single life, forced to finish each stage in two minutes, and is just an overall cruel game.

In that regard, the dev team for both titles, Technos, essentially treated Double Dragon like a genuine sequel, modifying what didn't work and made for a more "accessible" experience. Along with the already-mentioned changes, an immediately noticeable example is the reduced enemy presence, usually maxing out at three adversaries on screen from Renegade's overbearing six. Though, this has to do with the game slowing down when there's at least four characters present; you can imagine what two-player co-op is like... Also, performing moves has been slightly revised, possibly to include more attacks with the three available buttons. Specifically, you can now do a backwards elbow and backwards jump kick with either a punch-jump or kick-jump combination. The running attack and ground pummel have been removed, probably since they can be abused nonstop with less enemies on screen and a lax timer.

However, if the intent of removing those two particular moves was to avoid exploitation, then they missed something: the backwards elbow attack is overpowered. With all other attacks and moves in Double Dragon, there's always a possibility of the enemy breaking through your combos or dodging special attacks. But the elbow attack easily penetrates all encounters up close, giving you an opportunity to strike before the enemy does. On top of that, this special attack can immediately knock opponents back on the ground as they're getting up. Even on the highest difficulty setting when everyone moves faster, you'll barely lose a life until late in the game. Hell, I managed to defeat the final boss before any of his goons died! And they all just walked away afterwards! And here I thought the jump kick from NES' Double Dragon III to be the only broken move in the series...

What if the elbow incident wasn't a thing? Then the game's biggest challenge would have been fighting weapon users with your bare hands and the menacing, towering Abobo committee of shirtless, muscled anomalies. And from there, it becomes a clash of picking up dropped weapons before the other person gets to it. Considering how much this title inspired the genre's future, it is depressing how easily Double Dragon falls on its face when you discover just how powerful a single attack breaks the game. Unfortunate, but bizarrely fitting, since this is the start of an IP rife with games of shocking degrees of quality; ranging anywhere from broken jump kicks and safe havens at the bottom of the screen, to pointless, uncontrollable raft rides. Then there's the arcade's DD3 gimmick of having to insert more coins just to buy moves and health in item shops.

The Double Dragon franchise is a helluva thing, ain't it?
2/5

If you enjoyed this Arcade Archives: Double Dragon review, you're encouraged to discuss it with the author and with other members of the site's community. If you don't already have an HonestGamers account, you can sign up for one in a snap. Thank you for reading!

© 1998-2021 HonestGamers
None of the material contained within this site may be reproduced in any conceivable fashion without permission from the author(s) of said material. This site is not sponsored or endorsed by Nintendo, Sega, Sony, Microsoft, or any other such party. Arcade Archives: Double Dragon is a registered trademark of its copyright holder. This site makes no claim to Arcade Archives: Double Dragon, its characters, screenshots, artwork, music, or any intellectual property contained within. Opinions expressed on this site do not necessarily represent the opinion of site staff or sponsors. Staff and freelance reviews are typically written based on time spent with a retail review copy or review key for the game that is provided by its publisher.