Kazuma Kiryu has a problem. Yearning to follow in the footsteps of the patriarch of the orphanage he grew up, he enrolled in a local chapter of the yakuza at a young age. He took to the life of a thug for hire with relative ease, being more or less unsurpassed as a raw, uncultured fighter. But during a routine collection for a local loan shark, the client he had roughed up turned up dead in the back streets of Kamurocho, Tokyo. He was still breathing when Kiryu left him with a considerably lighter wallet. He was also minus the gunshot wound that would lead to his demise.

The body presents a lot of problems. In a very short amount of time, chapters of yakuza sought to make a scapegoat out of Kiryu to obscure the dark conspiracy unfolding in their midst. The murder took place in an empty lot deemed crucial by several parties as the missing piece of property to complete their status of god-like slum lords. Rival families, foreign gangs and the police all gun for Kiryu who finds himself hunted from all corners. His only chance is to disavow his family links and attack it from the outside to find the ringleader of the conspiracy that calls for his head. Attacked at every turn, hounded and harassed, forced to scrape and claw and fight for the briefest bubble of breathing room, Kiryu wages a one man war against the very organization he so desperately wanted to be a part of.

But first he plays a few games of shoji before heading to the local arcade to waste a few coins trying to fish out toys from the UFO catcher. Then he hangs around in the batting centre for a while to work on his swing. Then he helps a struggling dominatrix figure out how to belittle her clientele correctly. He tries to deliver a pizza before it gets cold, helps shoot a commercial in a local diner, recreates the Thriller video by protecting someone who certainly is not Michael Jackson from a horde of extras dressed as zombies, and throws a few hands of darts. 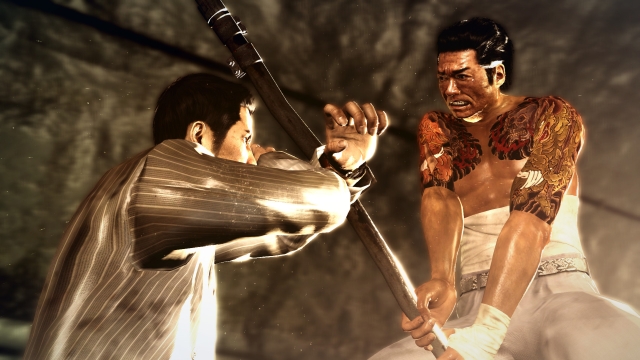 In a lot of ways, Kiryus time is short. The noose around his neck is ever tightening as new factions join the hunt to ensure his silence, and existing ones extend further hostilities. In a lot of ways, Kiryu has to act quickly and quietly to continue to evade his would-be assailants. But SEGA have been wise, and make his creeping deadline in theory only. For large parts of the game, Kiryus free to ignore all that plot nonsense and just traipse around Kamurocho doing whatever the hell he pleases.

And theres so much to do. While some of me wanted to delve further into the grimy underworld in an attempt to clear Kiryus name, screw that noise; beating an arcade employee at Outrun means that theyll install Fantasy Zone cabinets, which is only, like, the greatest cute-em-up ever made! Early in the game, you gain access to a pocket racer arena where you, the serious gangster wanted dead by anyone who ever uttered that Japanese version of nyah, see? can smugly school any eleven year olds foolish enough to step up. You can become a fantasy rock star in karaoke sessions that ramp up unforeseen levels of ridiculous glam the deeper into the song you get.

Theres always some weird discovery to be made around the streets of Kamurocho, waiting to reward your exploration. You can collect phone cards adorned with pretty women in dusty forgotten corners. If thats not enough, by befriending or helping various girls around the city, you can unlock videos of them prancing around in skimpy bikinis that you can watch in the seediest of stores for only 800 yen a pop. 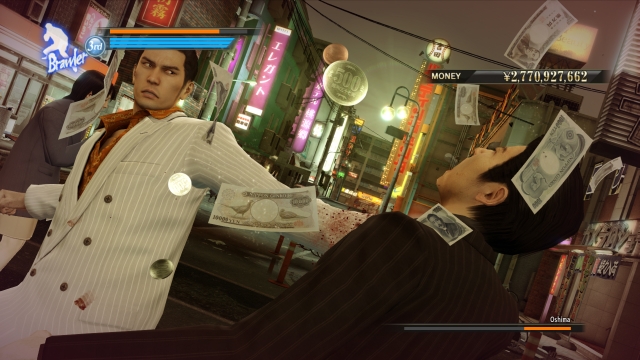 Later on in the game, you become the unwilling manager of a real estate office, because of course you do. Thats just the kind of thing that happens to you in Yakuza 0. You could take this business seriously and try to recruit upstanding business partners to help regulate your properties. Or, you know, not. Why not recruit that girl who you talked out of selling her used underwear on street corners instead? Been bowling recently? Due to an ordering mishap, the roast turkey you can win by scoring a turkey during a set is actually a live chicken. But he seems pretty bright for poultry; he can manage a sector of properties, too.

You can rescue victims of roving muggers, sneak through a crowded street to try and buy a porn magazine for a small child without being spotted and shamed, or defend the worlds worst mushroom salesmen from the mafia itself. Stoney-faced and unshakable, Kiryu undertakes even the most ridiculous quest with a sense of gravity and seriousness. But eventually, he will have to stop trying to teach polite young men how to be disrespectful street punks, or answering scrawled graffiti in a mens public toilet (it was the twitter of the 80s!) and just get on with pummelling gangsters and hired thugs. Ploughing through lackeys by the dozen in order to go face to face with grizzled yakuza lieutenants, cycling through Kiryus equally robust trio of fighting styles to counter the threat youre facing. Quick evasive strikes, beastly overpowered smashes or balanced, thoughtful surges of outright violence. Even though youll do everything you can to extend your stay in Kiryus world, the ludicrous stockpiles of things to do will slowly and sadly start to wane. 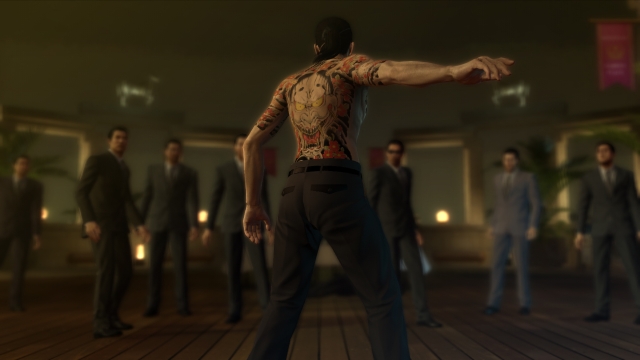 But thats okay; Kiryus tale only constitutes half of Yakuza 0s ever unfurling yarn. Meet his counterpart, Goro Majima, a cabaret manager in Osaka, Sōtenbori. Dispelled from his own Yakuza sect for choosing loyalty to his sworn brother over his oath to the family, hes held hostage, forced to rake in endless revenue in an attempt to pay off his debt. Working a job he hates to appease employers he cant stand, hes suddenly offered a shortcut out of his indebted life and back into the guild; make one solitary hit. Snuff out one life, and win the chance to claw back his own.

But he wont do that. Not right away. First theres a ramen store he needs to try out. Then he can try to befriend a local chef by going fishing to obtain the choicest and freshest of ingredients. Then he infiltrates a cult to free a weak-minded disciple and distracts a crowd so a living statue can sneak off to the toilet. He takes over from a barman and tries to bluff through pretentious customer questions about the origin of high-end whisky and accidently suggests new and brutal ways to raise taxes to a government official. He helps with bungled proposal attempts, wins dolls for a creepy kid and declares outright war on the worlds most annoying pensioner. Theres a tale about sacrifice and loyalty buried in there somewhere. Good luck getting around to it.

If you enjoyed this Yakuza 0 review, you're encouraged to discuss it with the author and with other members of the site's community. If you don't already have an HonestGamers account, you can sign up for one in a snap. Thank you for reading!

© 1998-2021 HonestGamers
None of the material contained within this site may be reproduced in any conceivable fashion without permission from the author(s) of said material. This site is not sponsored or endorsed by Nintendo, Sega, Sony, Microsoft, or any other such party. Yakuza 0 is a registered trademark of its copyright holder. This site makes no claim to Yakuza 0, its characters, screenshots, artwork, music, or any intellectual property contained within. Opinions expressed on this site do not necessarily represent the opinion of site staff or sponsors. Staff and freelance reviews are typically written based on time spent with a retail review copy or review key for the game that is provided by its publisher.