Before the super deformed visual style, the comical overtones, the BARFS and BIFFS, and the abnormally huge catalog of sports titles, the River City/Kunio-kun franchise had a very straightforward, serious start with Renegade. Using a flurry of punches, kicks, jump kicks, and grab moves, the vigilante protagonist, Mr. K, takes on The Warriors-esque thugs and punks in graffiti-covered subways, biker gangs by the bay, and feisty, whip-wielding women on street corners in this introductory release. And while this may sound horribly mundane by today's standards, the game was considered innovative back then, with its flexible selection of moves, isometric surfaces to navigate around, and a big, on-screen enemy presence. Renegade is often perceived to be one of the fathers of modern day beat 'em ups. 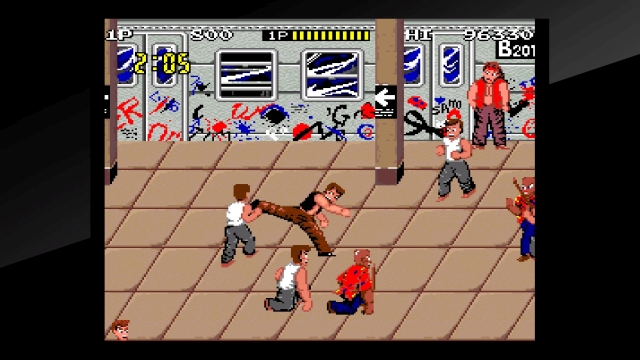 With that in mind, it's really easy to see how much influence it had over subsequent games in the genre with just a brief session... for better or worst; enemies constantly backing away when you're going in for a hit, the ability to dash with double tapping, the way opponents somehow destroy your combo with a cheap attack that drains a chunk of your health, being able to "blind kick" a thug sneaking from behind, and so forth. In fact, the original Double Dragon borrows heavily from Renegade, right down to the way characters animate when they get hurt, as well as the final boss's weapon of choice. Not surprising, since the same dev team is responsible for creating both IPs.

Some of the aforementioned irritations are still around to this day in other beat 'em ups, but they became more bearable over the years due to modifications, ranging anywhere from a gracious amount of health and counters, to special attacks piercing through nonsensical interruptions. I could easily excuse Renegade's issues due to poor aging, but I'm more inclined to blame its flaws on overall poor design. On paper, Renegade is a very, very short game with a grand total of four stages, and each location rarely has more than ten enemies to eliminate. Of course, because this was originally an arcade release, the possibility of completing the game in just under ten minutes didn't sound like a profitable venture, not to mention the nonexistent replay value. How did the dev team curb this problem? By inserting undesirable restrictions. 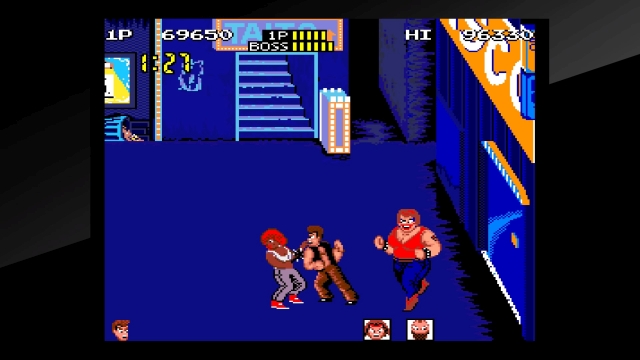 Games are no stranger to time limits, but Renegade expects you to complete each stage in two minutes. Keep in mind, enemies constantly back away, constantly sneak in cheap shots when you finally land a combo, and above all else, you have to deal with a boss. In under two minutes. You can't even fight the boss by themselves, either; once three normal opponents remain, the boss hops in, which is tough since they land hits faster than standard goons. Annoyingly, bosses also have a bad habit of standing inside other enemies, which makes it easier for them to break your combos. What happens when the timer runs out? Game over. You only have one life and there's no continues. Enter your initials at the high score screen, get sent to the title screen, and relive the horror.

Though, you can obtain an extra life if you somehow gain enough points in stage two, but it's almost like the devs did this on purpose... Stage two is outright the most aggravating stage in all of Renegade, because you're required to make pixel perfect jump kicks against motorcyclists haphazardly riding around the area. You would think the stage concludes after this nightmare, but the devs want you to participate in another gang fight with a boss. In two minutes. Interestingly, if you pass the bike section, get that extra life, and die, the game spawns you past the bike segment; it's like the devs want failure on your first try. Their method of taking credits away from players is pretty sleazy, and that's really saying something for a game released during an era of quarter-munching dominance.

Hamster, the devs responsible for the Arcade Archives port, could have remedied these frustrations by adding simple solutions. They kinda do, but it's done in a bewildering fashion; simply fiddling with the game settings menu for the first time will make you go "Bwha?" You can change how many lives you get from your lonely one... to two. You can change the extra life score setting from its default 300,000... to none. You can change the difficulty setting to easy, which doesn't amount to any drastic difference... or switch it to hard or super hard. Thankfully, there's a feature that allows saving anywhere in the game. However, it's the type of feature meant for those needing to stop their precious playthrough of Renegade at a moment's notice. So you basically have to shut it down from the PS4 menu and restart just for the save to load. Yeah. That's a thing.

Personally, the biggest disappointment with this port is the absent option to play as the original Japanese iteration of Renegade, called Nekketsu Kouha Kunio-kun. I mean, how hard would it have been to add an option to switch versions? Would have been a nice, firsthand history lesson for those curious about the "River City" franchise's origin of a hot-blooded, high school delinquent, to experience how much and how little has changed over the series' long run. Though, even if it was added, this still wouldn't be a worthy purchase. Renegade may be a significant title within the annals of its genre, but the poor structure and design, coupled with other games and companies significantly improving on its template over the decades, makes it a very questionable buy. At best, the game belongs in a compilation, not a standalone release.

If you enjoyed this Arcade Archives: Renegade review, you're encouraged to discuss it with the author and with other members of the site's community. If you don't already have an HonestGamers account, you can sign up for one in a snap. Thank you for reading!

© 1998-2021 HonestGamers
None of the material contained within this site may be reproduced in any conceivable fashion without permission from the author(s) of said material. This site is not sponsored or endorsed by Nintendo, Sega, Sony, Microsoft, or any other such party. Arcade Archives: Renegade is a registered trademark of its copyright holder. This site makes no claim to Arcade Archives: Renegade, its characters, screenshots, artwork, music, or any intellectual property contained within. Opinions expressed on this site do not necessarily represent the opinion of site staff or sponsors. Staff and freelance reviews are typically written based on time spent with a retail review copy or review key for the game that is provided by its publisher.