Pitfall is an old relic of a game, and it boasts a rich and proud history. It's famous for being among the first true 2D platformers, and as crude as it was to simply run and leap over pits (hence the name!), it was fun for its time, and so was its direct sequel, Pitfall II: Lost Caverns.

Pitfall: The Mayan Adventure is not fun for any time. And it's far from the trailblazer that its predecessors were. Lest you think me one of those hopelessly clueless curmudgeons who foolishly and unfairly judge old games against today's standards, let's put The Mayan Adventure's crappiness into context.

The Mayan Adventure game out in 1994. 1994 was a good year for 16-bit platformers. Konami released both Castlevania: Bloodlines, and Contra: Hard Corps that same year, for the Genesis, without the 'added muscle' purported to be possessed by the doomed 32X add-on. 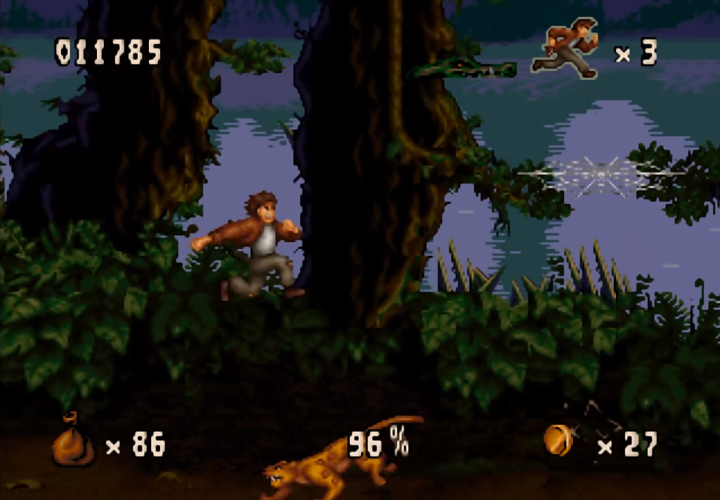 So developers knew how to make absolutely awesome 2D platformers by this time; in fact, it was what they did best. And yet, while The Mayan Adventure looked fantastic at first blush, with its detailed, painterly sprites reminiscent of Aladdin, and lush, if muddy backdrops -- but when you see the game in motion, you're apt to go from impressed to incredulous in short order. The game seemed to try hard to ape the fluidly animated titles of its time: like the aforementioned Aladdin, and Prince of Persia. But The Mayan Adventure seems OVERanimated, if such a thing is possible. Every movement is exaggerated and reminds me of how characters move when they're trying to tiptoe quietly in old cartoons. Imagine if your avatar was always doing that.

Imagine too, if, in doing that, your character's dramatic and slippery ambulation actually negatively impacted the way you controlled him in the world. When a snake sidles up towards you and you press the button to hurl a rock at it, you will usually find yourself in mid-toss, working through superfluous frames of animation even as the snake has struck and is right in your midst. Naturally, the first little while of that happening will lead you to adjust, but player-made adjustments for clunky inputs shouldn't have to happen, and are always going to feel imprecise and inconsistent. 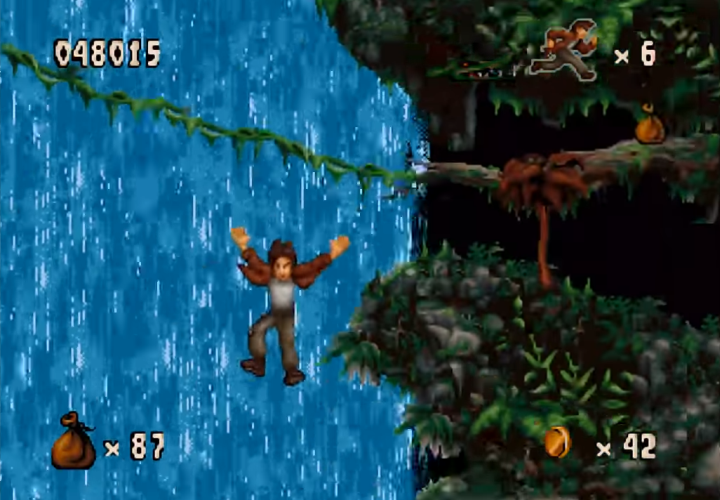 Compounding the control issues, are confusing level layouts. There are 14 stages on offer, as our hero travels through forests and caves and mines -- the usual platforming fare. The Mayan Adventure wanted to be multilayered and ahead of its time, but all that its needless complexity accomplished is player frustration. You'll move right, and slingshot your way to a higher plane. Sometimes you'll traverse a chasm by zipline; other times by going hand-over-hand on a tightrope secured high above the path below from whence you came. The criss-crossing, back-and-forth setup when taken with the bad controls leads to countless failed jumps and slips off platforms whereupon you have to work your way back up in the midst of regenerating enemies. It's a bit of a mess.

The best thing I can say about the 32X version of The Mayan Adventure in particular, is that it's no worse than the Sega Genesis game upon which it's based. But that's not really praise, is it? There's no good version of this game: how it commanded a release on so many platforms is astounding. If you're a gamer who likes to go back and pay homage to the classics, don't be fooled by the Pitfall part of The Mayan Adventure's name into thinking this is one of those classics that deserves your attention and reverence. Beyond the general Indiana Jones-esque motif, there's no resemblance at all to its heralded forefather.

If you enjoyed this Pitfall: The Mayan Adventure review, you're encouraged to discuss it with the author and with other members of the site's community. If you don't already have an HonestGamers account, you can sign up for one in a snap. Thank you for reading!

© 1998 - 2022 HonestGamers
None of the material contained within this site may be reproduced in any conceivable fashion without permission from the author(s) of said material. This site is not sponsored or endorsed by Nintendo, Sega, Sony, Microsoft, or any other such party. Pitfall: The Mayan Adventure is a registered trademark of its copyright holder. This site makes no claim to Pitfall: The Mayan Adventure, its characters, screenshots, artwork, music, or any intellectual property contained within. Opinions expressed on this site do not necessarily represent the opinion of site staff or sponsors. Staff and freelance reviews are typically written based on time spent with a retail review copy or review key for the game that is provided by its publisher.