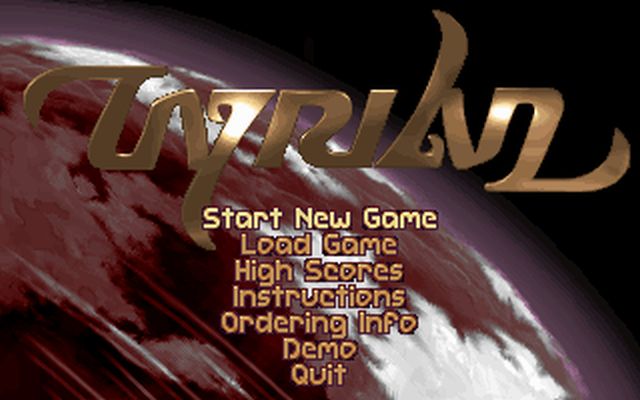 Few video game genres are as intuitive as the scrolling shoot-'em-up; move a ship around while shootin' up the bad guys. Yet few genres are currently so niche as this simple mode of gameplay. This strange disparity is due to no inherent flaws of the shmup genre but by flawed design that permeates almost every title. A game in which repetition and memorization is the only way to avoid dying in one hit from waves of oft poorly telegraphed obstacles is not an acquired taste. That's bad game design. This, along with blatantly insubstantial amounts of content that banks on the player wasting time doing the same stages repeatedly due to getting one-shotted or obtaining worthless bragging rights, has resulted in the genre having very limited appeal. However, Tyrian stands above its competition, achieving a level of quality that puts almost every other game of its genre to utter shame.

An immediately apparent aspect that promotes Tyrian above other shmups is the customization system. Unlike other shmups that have points systems to pad a blink-and-you'll-miss-it campaign, Tyrian's points system doubles as currency to buy various upgrades, including weapon powerups, new ships, more weapons, options, shields, and a generator that allows for more efficient use of these. Player skill is rewarded new tools of destruction, and the player can re-appropriate spent upgrades to try out new ones, encouraging experimentation and adding replay value by diversity. Some upgrades appear after certain levels, instilling long-term strategy into customization that stays fair thanks to an incredibly user-friendly saving system that includes both autosaves and dozens of spaces for manual saves, a much better system than having to beat the whole game in one sitting. 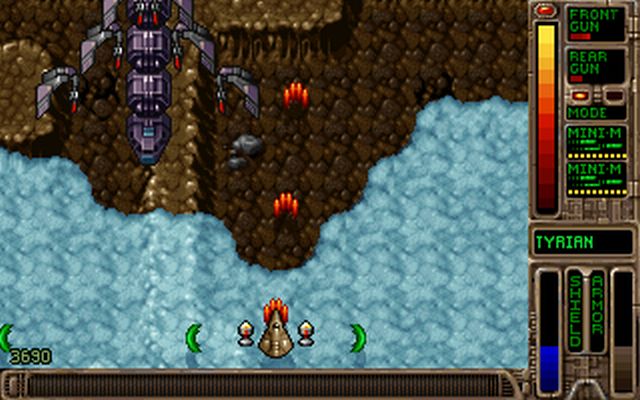 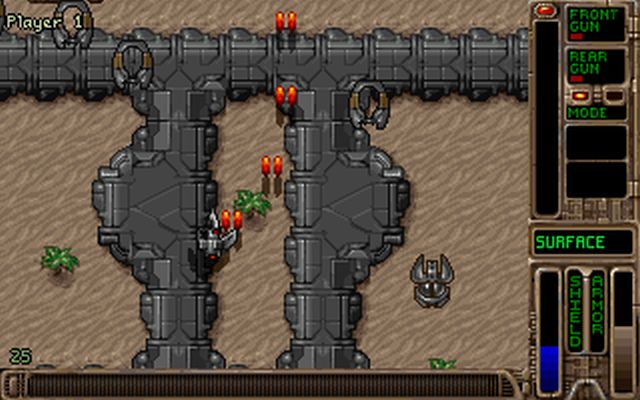 Speaking of user-friendliness, Tyrian's chief brilliance is its health system. Most other shmups never grew a brain and developed beyond the primitive extortion-by-quarters arcades, killing you in one hit. Tyrian actually wants you to have fun, so you have a multi-layered defense system. First, a shield bar that regenerates if damage is avoided long enough. Next, a health bar instead of just one touch resulting in death. Finally, drones that replenish health if you can reach them, a hail-mary that requires player skill to make use of. Even if you do die, you must restart only that level; no game overs or extensive rehashed content by failure. At last, a shmup with a system that sets no arbitrary gate to player entry!

If all this sounds too easy, believe me when I say it isn't. No aspect of gameplay is overpowered, and you'll still need skill to deal with hordes of tough enemies and bosses. The difficulty never reaches bullet-hell levels of hatefulness, but there's no way you'll be getting past some of these challenges without an understanding of the game mechanics and thoughtful customization. You can even use an option to adjust the game speed whenever you feel like it. For you MLG-types, try one of the many difficulty modes, which actually improve enemy AI and projectile speed instead of just slapping on a few more steel hulls on every foe's ship. See how tough you really are after "Lord of Game" mode kicks you to the curb! 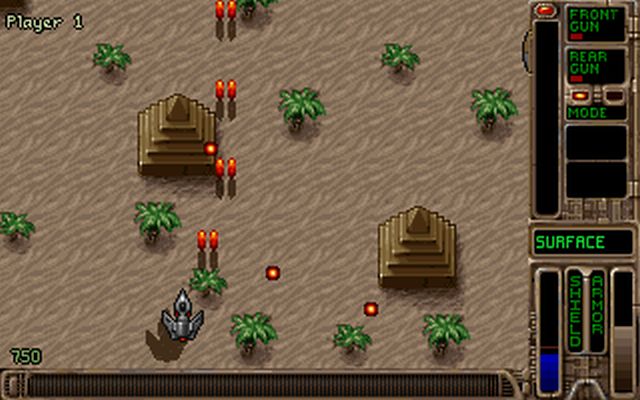 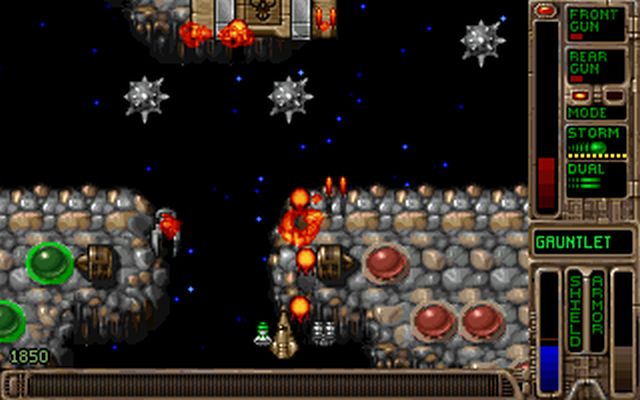 To recap, Tyrian is better than all its peers because it has superior customization, weapon diversity, user-friendliness, health systems, learning curve, gameplay speeds, difficulty modes, and AI. And we're just getting started!

Tyrian's levels are challenging but never trollish. Each is neither too long nor too short, letting that one life last just long enough to raise the stakes once things start heating up, but the game never feels spiteful if you lose that life and start the level over. Levels last long enough to be tough, but each attempt rewards the player with experience and a better idea of what to do next time, never revoking too much progress in doing so. The varied obstacles you must overcome never rely on nonsensical, untelegraphed attacks that give the player no time to react, so it's a good type of challenge, one that teaches the player through each loss instead of demanding repetition. 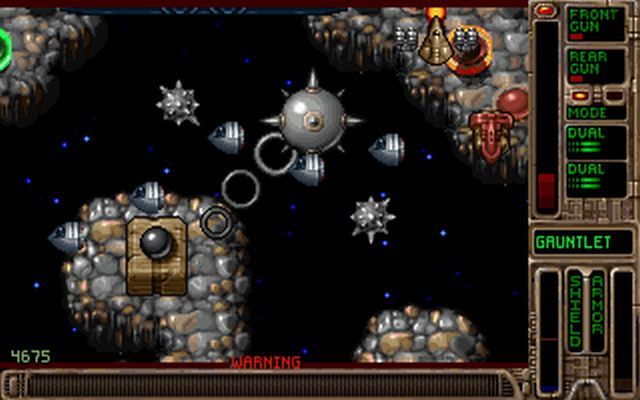 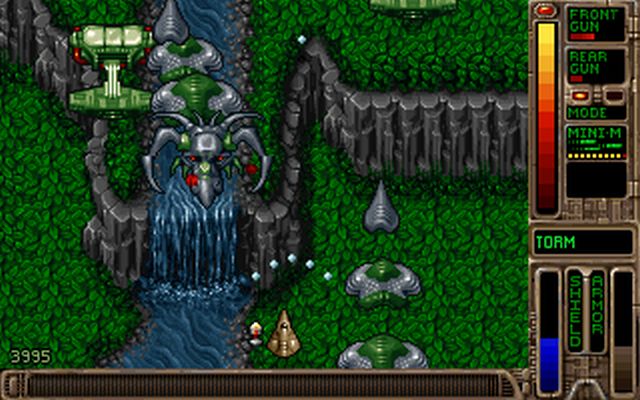 Most shmups have only 10 levels at most because the devs stretch the game out by unfair, time-wasting deaths, but Tyrian has precluded that option, so only one approach remains: actual content. Tyrian boasts dozens of levels with beautiful variety: mining quarries, coral reefs, planetary cores, flesh-asteroids, war fleets -- the list goes on, and you'll be seeing dozens of levels no matter which of the branching paths you take. Plus, levels hide many secrets, such as hidden superweapons, methods of unlocking bonus levels, and more. Tyrian's levels may not have the spectacle of, say, Thunder Force 4, but they've more substance, more variety, and -- can't stop me now -- more quality!

As if dozens of levels wasn't enough content, Tyrian has secrets and bonus modes! For instance, every ship has its own super-attack that can be activated by a button combo, adding yet more depth to customization. A two-player mode allows for the use of two ships onscreen that can even combine to make a sort of twin-stick shooter mode that gives divides control of movement and multi-directional aiming. Plus, it's perfectly feasible for one to just control both halves and end up with yet another totally new way of play. Don't get me started on all the other secrets, such as the cheat codes, hidden Scorched Earth minigame, and the Christmas mode! 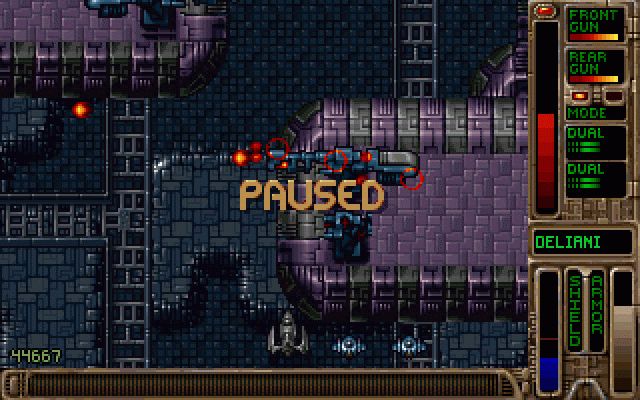 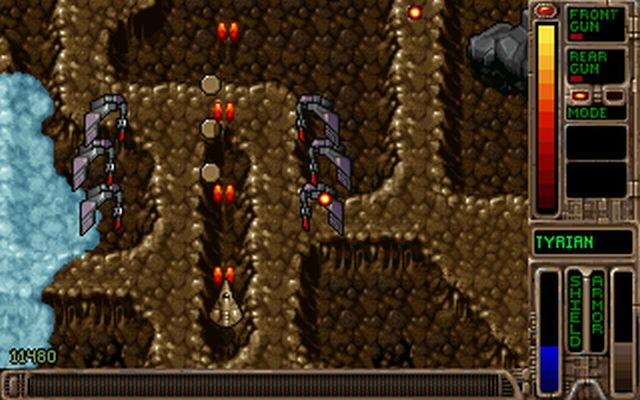 To recap, Tyrian is better than all its peers because it has superior customization, weapon diversity, user-friendliness, health systems, learning curve, gameplay speeds, difficulty modes, AI, content, level design, branching paths, location variety, secret mechanics, co-op functionality, minigames, and cheat codes. Time to add the finishing touch with a regard that Tyrian does better than not just every single other shmup, but most other games: the writing.

Great writing in a shmup? Yep, Tyrian just had to have a good plot, too. Between missions the player is gifted a better understanding of the world of Tyrian by reading various audio books, some of which are rewarded by defeating enemies in levels. As if this game wasn't running laps around the competition in terms of replayability. Penned by programmer and composer Alexander Brandon, Tyrian's writing is sometimes humorous, sometimes dark, but always creative. You are war-worn Trevor, who finds himself at odds with the nefarious Microsoft, erm, Microsol Corporation, and thus an intricate shifting of alliances ensues, resulting in meeting some memorable characters with great dialogue along the way as you struggle to just get out of the whole situation. 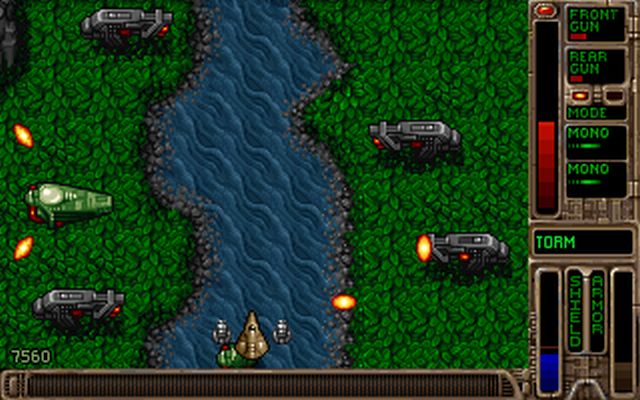 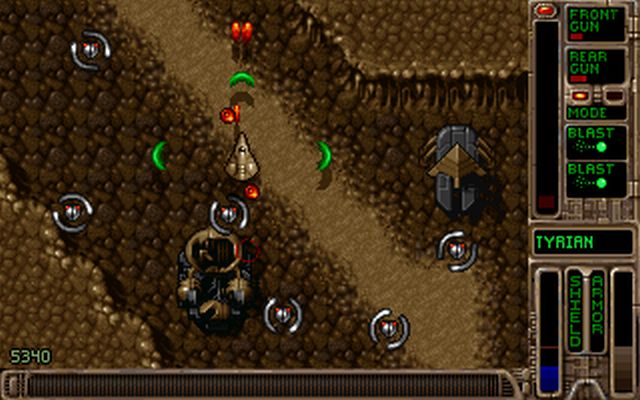 In terms of writing, Tyrian could be best compared to Doctor Who and Hitchhiker's Guide to the Galaxy, a good balance of serious situations and levity within fascinating sci-fi. An example is when an attempt to reverse a reaction that would have caused a planetary core to overheat results in the planet getting frozen instead! Even without its unique brand of humor, Tyrian still is a fantastic setting, with such elements as a living planet of organs or a weaponized planetary electromagnetic sphere adding incentive to get those log books and adding more nuance to a game that works just fine as a collection of memorable levels.

So there you have it. The greatest shmup ever made. Tyrian is not flawless - I wish for a remaster to help free it from hardware limitations on the audio-visual fronts - but it's so much better than it had to be, especially considering the low standards set by other shmups. This is what the genre should aspire to be. Tyrian is truly a game that goes above and beyond the call of duty. Respect.

Oh, and did I mention it's freeware?

If you enjoyed this Tyrian review, you're encouraged to discuss it with the author and with other members of the site's community. If you don't already have an HonestGamers account, you can sign up for one in a snap. Thank you for reading!

© 1998-2021 HonestGamers
None of the material contained within this site may be reproduced in any conceivable fashion without permission from the author(s) of said material. This site is not sponsored or endorsed by Nintendo, Sega, Sony, Microsoft, or any other such party. Tyrian is a registered trademark of its copyright holder. This site makes no claim to Tyrian, its characters, screenshots, artwork, music, or any intellectual property contained within. Opinions expressed on this site do not necessarily represent the opinion of site staff or sponsors. Staff and freelance reviews are typically written based on time spent with a retail review copy or review key for the game that is provided by its publisher.