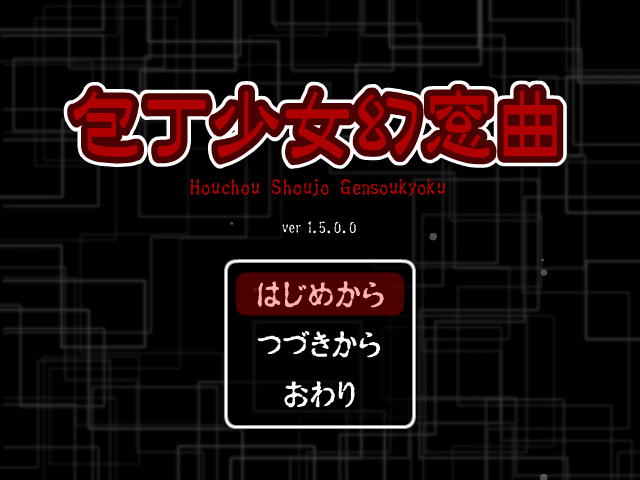 The internet marks a new age of works created by fans to advance the legacy of a pre-existing work, and these efforts have nurtured new artists from those building upon the old. While many of this content makes for compelling arguments to suppress all creative thought (link to an unfiltered DeviantArt page here), one would be remiss in recognizing impressive fan-created content. Few tributes are as challenging to pull off well as the fangame, which must meet the criteria of being recognizable to its source material in terms of aesthetic and tone while still bringing something new to the table. With fangames, you've the good, the bad, and the weird: highly professional games, 2-bit garbageware, and the likes of Yume Nikki Gensou.

The original Yume Nikki was a game about wandering about a psychedelic hellscape, taking in the grim sights and sounds. No platforming or combat; chiefly aimless exploration and the thrills and chills of discovery. There are literally dozens of excellent fangames based on this niche style, such as Yume 2kki and .flow, but why not make a fangame that's a 2D action-platformer structured like a Metroidvania and plays like a translation of Devil May Cry? What could possibly go wrong?

So, uh, that's what an entity known as Atelier Izumi did, hosted on a dead Japanese website with many dysfunctional download links, chiefly to Yume Nikki-inspired music and fangames (including a Street Fighter-esque affair). Information about Izumi is as elusive as the creator of the original Yume Nikki; seems to be a theme with these Yume Nikki fangames. Maybe they're cursed or were made by warlocks or something. The manual and in-game text are all in Japanese, and since I no sprechen de Japanese, almost everything about this game was a mystery as I went in. In fact, pretty much the only aspect of this bizarre work I knew about beforehand, and the reason I started this strange journey in the first place, was the music. See, I'm a biiiiig fan of video game music, seeking out obscure gems far and wide. Yume Nikki Gensou had one such soundtrack, and from just the first level theme, I knew this game had to be unique. I knew that because Gensou has one of the best soundtracks I've ever heard, a mix of complex tempos, percussion, and array of instruments forming fascinating variations of loops from the original Yume Nikki. One could only hope the game itself would be as interesting.

"Interesting" was one of the first words to come to mind when I started the gameplay, what with Madotsuki jumping around with a knife and all. After the initial confusion subsided, more confusion followed as I noticed the strange "boing!" sound effect for every jump Madotsuki took as she somersaulted into the air. Immediately inescapable were the trademarks of Adobe Flash games: low visual detail, music that didn't loop well, and a tiny resolution. That last one was a pain to work around; using fullscreen in Flash just results in a massive letterbox around the tiny image at the center, so the least terrible solution was to enable the "Hide Toolbar" function and the "Run in 640 x 480 screen resolution" function in the .exe file's Compatibility Properties menu. All this and the lack of controller support by use of freeware program Joy2Key) did not leave a positive first impression on me. 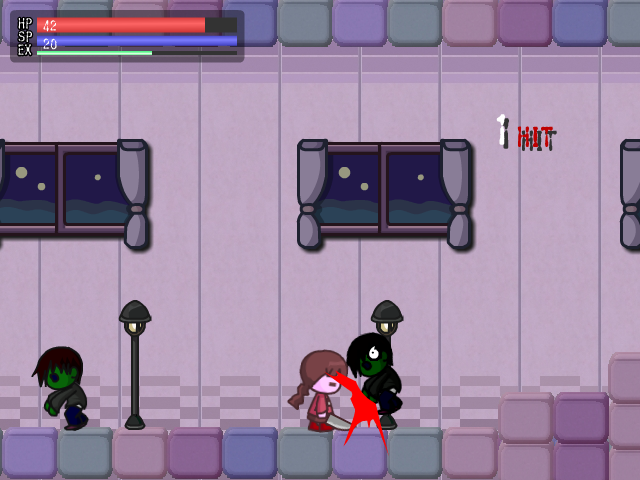 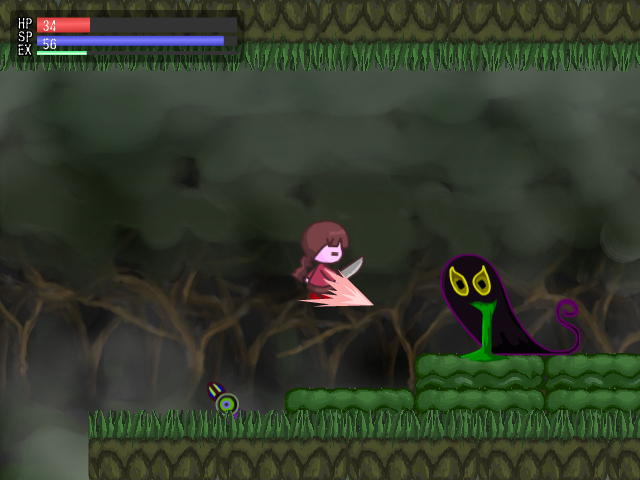 Soon it was time for combat. You've the ability to jump, do a attack combo, and dodge-jump backwards. Killing my first foe, a zombie that was a callback to a corpse found in an isolated road in Yume Nikki, I was startled by its high- pitched death screech, a sound clip every enemy in the game shared in common. This and the animation of its head being sliced off in gory fashion was quite a contrast to the peppy music and colorful visuals. What is this game? Best to give in to the madness and not take all this too seriously, huh?

Eventually, another unpredictable discovery was made: Yume Nikki Gensou's gameplay... is actually quite fun! Madotsuki gets a variety of abilities throughout the game, and the wider her moveset becomes, the more apparent it is that Gensou's stun and vulnerability frames are just right to make for a compelling combo system with lots of options to mix things up. These special moves can be activated by lengthy combos or certain hotkeyes, and the moves themselves range from projectiles to forward-moving spin slashes. All of these moves are complemented by a simple physics system that allows for juggling multiple enemies. Although the AI isn't impressive, as with most platformers, the challenge comes when you have to deal with enemies stronger or more numerous than you With a movepool expanded by progressing through the game, a variety of enemy types (even if they don't have the advantages of those of 3D action games), and a stamina bar that actually demands attentive play instead of prohibiting your freedom outright, Gensou is good fun, even if it is somewhat lacking in polish. 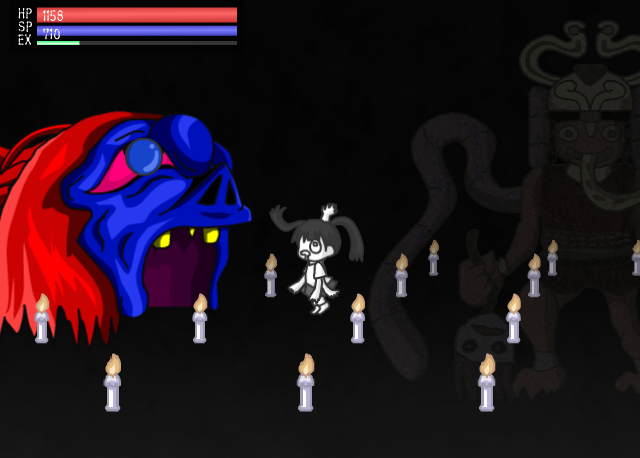 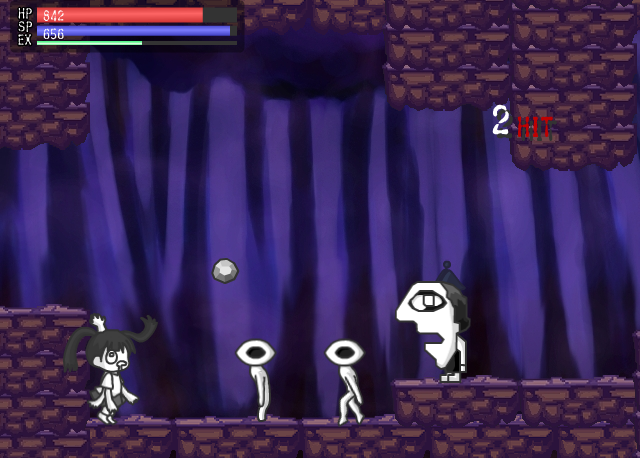 If there's anything holding the game back it's the tech, but this is one of the best-looking Flash games of its kind I've seen. The cutesy aesthetic helps mask the lack of detail, and the variety of areas and enemies (lifted from the original Yume Nikki) helps keep things fresh. It's realy too bad Atelier Izumi had no grander platform to share this fascinating vision, with this sort of gameplay being scarce before and even after the release of the magnificent Dust: An Elysian Tail. Perhaps it was the lack of resources or the awareness of the modesty of the visuals that resulted in Gensou having a playtime of a mere three hours, but this makes for great speedrunning material (especialy with considering some exploitable elements) and is bolstered by the addition of four (!) other characters to play as, each with their own unique movesets and play style. Not bad for a freeware fangame made in Adobe Flash.

With the scarcity of information surrounding it and the little attention it received, Yume Nikki Gensou is to remain a mystery in its oddity. A shame, because this is the work of someone with a vision. A very trippy vision, but one that resulted in a fascinating platformer with a combat system matched by few others, regardless of budget; one that strivings for gameplay excellence that, however unpolished, managed to reach higher than most other games of its sort dare to aim. And when I reflect on the discovery of Yume Nikki Gensou, I'm comforted by the fact that there are interesting works out there just waiting for me to share with the world to make it a more interesting place, and maybe even a bit of a better one.

If you enjoyed this Yume Nikki Gensou review, you're encouraged to discuss it with the author and with other members of the site's community. If you don't already have an HonestGamers account, you can sign up for one in a snap. Thank you for reading!

© 1998-2021 HonestGamers
None of the material contained within this site may be reproduced in any conceivable fashion without permission from the author(s) of said material. This site is not sponsored or endorsed by Nintendo, Sega, Sony, Microsoft, or any other such party. Yume Nikki Gensou is a registered trademark of its copyright holder. This site makes no claim to Yume Nikki Gensou, its characters, screenshots, artwork, music, or any intellectual property contained within. Opinions expressed on this site do not necessarily represent the opinion of site staff or sponsors. Staff and freelance reviews are typically written based on time spent with a retail review copy or review key for the game that is provided by its publisher.