I Hate Running Backwards is an inverted ever-runner with randomly generated stages featuring an ensemble cast of weirdos from the Devolver Digital back catalogue and modelled entirely on a throw away quip initially uttered in an early Serious Sam game. Its a thing thats happening, all right.

Ribbing on the tried and tested shooter trope of backpedalling in the face of mass opposition, desperately trying to kill everything before you run out of room, I Hate Running Backwards, bases its entire premises on many players last fleeting moments. In this case, the enemy forces (all, once again, lifted from various Devolver Digital games) come surging at you from the bottom of the screen, and its on you to see how long you can last. 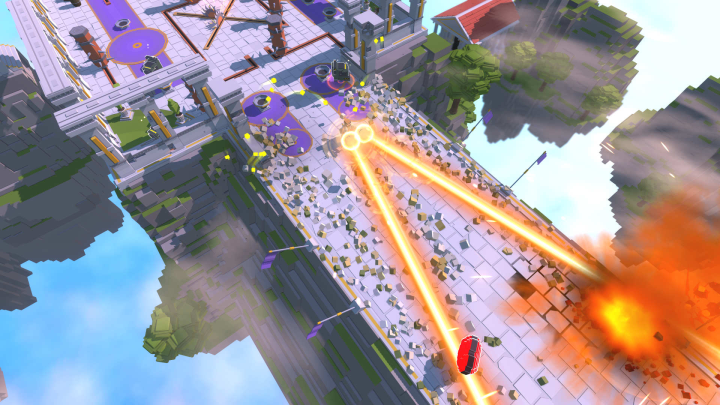 The answer is not long. At least not to begin with; your starting weapon (for most of the cast) is pretty weak stuff, offering just about enough to limp you through the first few waves of multiplying spiders and screaming headless zombies. But weapon crates litter your desperate moonwalk, offering ammo for weapons such as machine guns and shotguns that should even up the score a little. Other bonuses can be found dotted around the place, either in hard-to-reach corners or in the rubble of destroyed scenery. Blow up a wall or a cactus and maybe youll find a handy secondary weapon, like a flamethrower or laser gun. Or maybe something more passive, like a health-up or temporary shield.

If its starting to sound a little like a mobile ever-runner, then youre starting to understand what I Hate Running Backwards is built upon. Though there is an actual sense of progression involved  levels punctuated by boss fights, and an actual end game to work towards  the main thrust is to kill as much as you can before youre slaughtered, then do it all over again. Its a long established and successful formula thats long proven and oft abused. Its a keen employer of that just one more go factor that turns a quick fifteen minute run into the destroyer of entire evenings while you desperately try to better that last big score. Only, here, it never really pans out that way.

Maybe because points arent a big factor. Theres that conclusion to chase in their place and while your numerous murders do grant you points of a kind, theyre hoarded and used to purchase up to three perks that, hopefully, help you stay alive a little longer. That makes I Hate Running Backwards this weird hybrid between wanting to be seen as more traditional play-to-the-end progressional game melded with no-consequence score-rush death-a-thons. It doesnt really work. 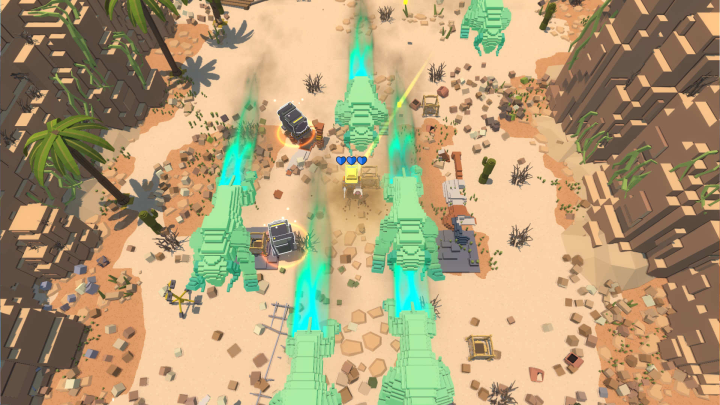 Take something like the randomly generated stages. In theory, these are a great idea to ensure that each run is slightly different and should help stop the game feel repetitive and wearing out its welcome early. Sometimes, it succeeds at this, such as having random vehicle segments sometimes drop, or slowly expanding your list of secondary weapons depending on what you manage to collect on each run. But then you do well enough to make it to a boss fight who often require more refined tactics than shoot it until it falls over. Theyre trial and error based affairs that you need a certain amount of experience with to learn attack patterns and work out successful counters. For example, a mech scorpion boss has miniguns where his claws should be; its pretty simple to figure out the safest thing to do is stay within the corridor of bullets, allowing you to pump artillery into its smug robot face. But then the guns shut down and it spits acid right down the previous safe zone youre probably still standing in. You had no way to know that attack was coming and probably only learn about it has hit you. Its a cheap hit to take, especially considering that when you die its alllllllll the way back to the start with you.

Youre given some leeway with a three hit life bar, which you can top up if youre fortunate enough to find hearts floating around the dungeons, but you can go several runs without seeing a single one due to the games random nature. I Hate Running Backwards then often makes your health stock an obsolete discussion anyway by factoring in instant death attacks, such as a telegraphing rampaging bull stampeding in from the sides of the screen. Because youre pre-warned of their imminent attack, you should be able to avoid them, but heavy cannon-fodder traffic or inconsiderate obstacles will something combine to force you into a very unfair feeling game over. With which, all your progress becomes meaningless and youre forced back to the start again.

If you enjoyed this I Hate Running Backwards review, you're encouraged to discuss it with the author and with other members of the site's community. If you don't already have an HonestGamers account, you can sign up for one in a snap. Thank you for reading!

© 1998-2021 HonestGamers
None of the material contained within this site may be reproduced in any conceivable fashion without permission from the author(s) of said material. This site is not sponsored or endorsed by Nintendo, Sega, Sony, Microsoft, or any other such party. I Hate Running Backwards is a registered trademark of its copyright holder. This site makes no claim to I Hate Running Backwards, its characters, screenshots, artwork, music, or any intellectual property contained within. Opinions expressed on this site do not necessarily represent the opinion of site staff or sponsors. Staff and freelance reviews are typically written based on time spent with a retail review copy or review key for the game that is provided by its publisher.