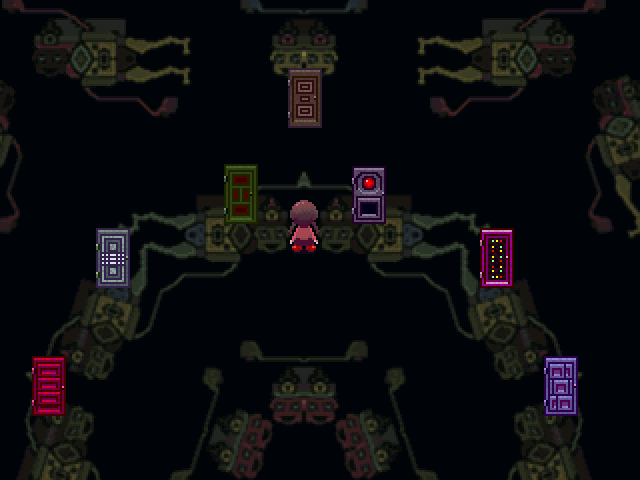 Some games resonate with us in ways that are difficult to articulate. When it comes to criticism, video gaming, like most other art forms, is like cuisine; there's no argument to be made for a quality of a dish that poisons you to death, but one may like an apple more than an orange, and one may not get the appeal of a caviar-based dish at all. Objective flaws and strengths do exist, but quality in relation to other works or a work in a vacuum of standards to be held to is something the consumer has some freedom to judge. On a rare occasion we are graced with a game that is unremarkable by most metrics yet unlike any other game out there. For many, a little freeware game named Yume Nikki is one such title, capturing imaginations and resulting in an underground cult status no other freeware has yet matched.

Yume Nikki -- Dream Diary in English, and not to be confused with the abominable Mirai Nikki series -- is a game with no traditional narrative. We are Madotsuki, a silent young girl who refuses to leave the confines of her claustrophobic apartment and thus has nothing to do but play games, gaze out the balcony, and sleep. In her sleep, we delve into the disturbing dreamscape of Madotsuki's troubled psyche. Here we see a freakish amalgamation of endless planescapes reminiscent of both real-life equivalents or utterly fantastic imagery evoking a mystical hallucinogenic quality, with bits of Escher and body horror thrown in for good measure. A foreboding Aztec hub area dares us to explore a host of strange subareas, from a vivid neon jungle to a darkened candle chamber littered with severed body parts. No goal exists; no explanations as to Madotsuki's horrific nightmares are placed front and center. In its simple pixels, Yume Nikki presents a tapestry of the psychedelic, and we behold in morbid curiosity. 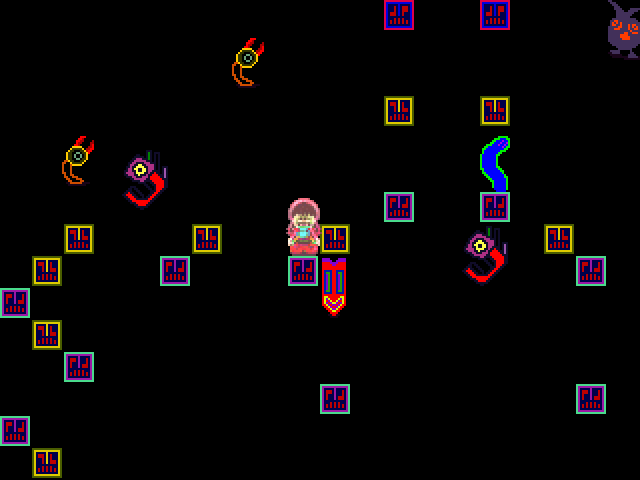 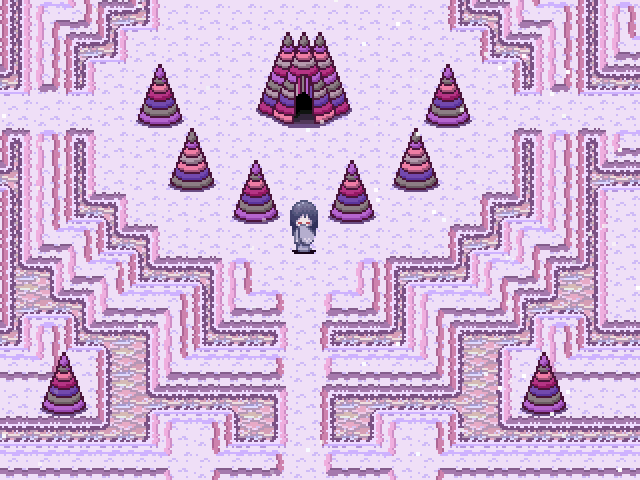 Our means of interaction here are relegated to exploration chiefly. In lieu of tangible combat or story, we are to observe our environs more than anything else. Locations are huge and usually vacuous, sometimes even labyrinthine. Those wishing for more than just wandering about will be left wanting; those of us drawn in by the sheer emotional texture of the weird wildernesses and hidden hellscapes will find a truly vast land with strange secrets strewn throughout its baffling mazes. Yume Nikki's most evident strength is its capitalization on the sensation of having found something off the beaten path. The game's nonlinear nature and lack of objectives makes it frustrating to navigate but also largely liberates it from the stifles of scripted sequences save for a few very memorable instances, resulting in a massive world that feels lonely yet alive.

The vastness that is Yume Nikki is best played for as long as interest in it is maintained, -- and while in a state of drowsiness, incidentally, -- but there are a few ways to interact with the game and even reach an end state. Madotsuki's mind can be further opened up to reveal deeper recesses should we find various hidden items. Most of these are cute cosmetics, but others have utility, such as a much-appreciated bike to increase movement speed, an umbrella to summon flame-quenching rain, or a knife to murder the figments of Madotsuki's mind. Should we somehow find these thoroughly obscured items and fulfill a few other requirements, we get a shocking yet logical conclusion to Madotsuki's story that will leave most of us emotionally drained and wondering what the point was of who knows how many hours walking about in circles. 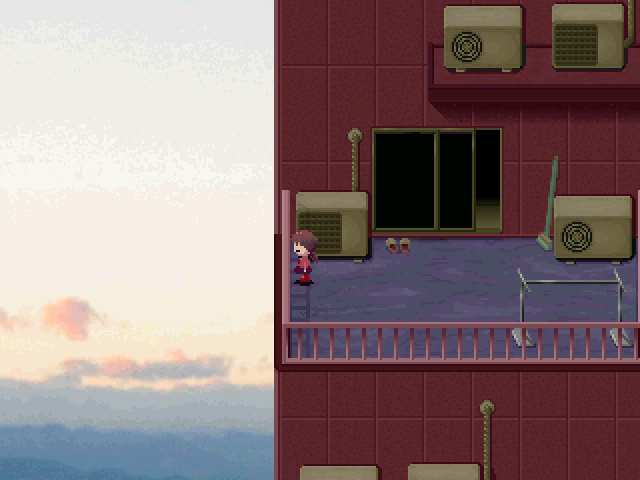 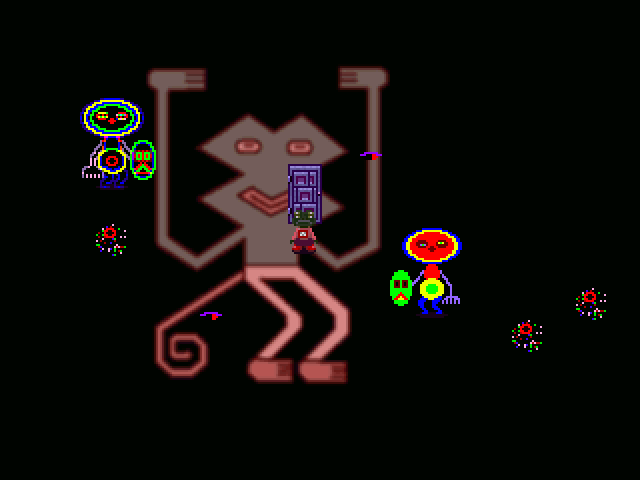 So that's the elements that comprise Yume Nikki; is the result worthwhile? It certainly isn't fun, unless you like aimless wandering; one could share finds with friends, but to value the game on this would be like judging a restaurant based on the time spent with close ones there. The very nature of Yume Nikki begs the question that we must answer before making an assessment of the artistic quality of Yume Nikki as a work: can there be any artistic merit in a work that eschews many of its medium's strengths? Can Yume Nikki be held as having good design considering its meager gameplay and seemingly absent plot?

The nature of Yume Nikki's gameplay is largely unprecedented (although a case can be made for baffling cult favorite LSD Emulator), so perhaps we can approach an answer to our quandary by examining similar works in other mediums. Consider the works of David Lynch, an ingenious/possibly crazy director whose films are very bizarre and mysterious, with eerie imagery and aura being a far greater driving force in his movies than something as tangible as a linear plot in three acts; as with Yume Nikki, "accessibility" and "wide appeal" are hardly synonymous with Lynch. However, not every work should be tailored to everyone, and there are indeed universal themes in his films, for the likes of Mullholland Drive and Twin Peaks offering a wealth of philosophical musings for those willing to put the work in to understand them. His films are complemented by his cinematography being used to craft a dark, mysterious atmosphere and subtly hint to what's going on behind the curtain he casts over his worlds. Looking at how people like Lynch deconstruct many of a medium's qualities (such as traditional structure and narrative) while still making use of the fundamentals exclusive to that medium (such as editing and camera work), a specific question relating to our quandary is inferred: does Yume Nikki, for all its deconstruction of traditional staples of gaming, still make the most of its medium? 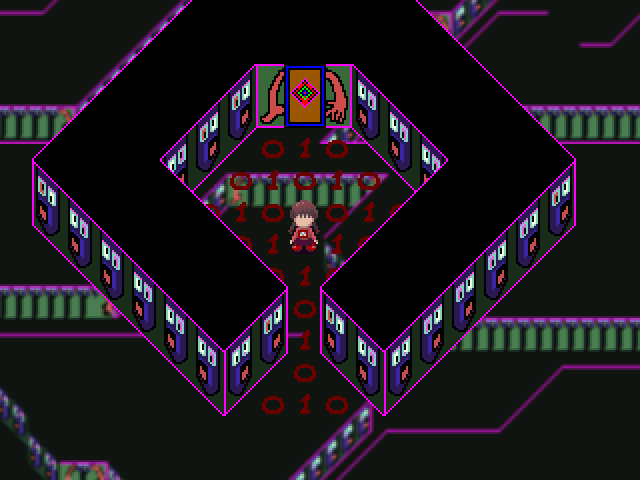 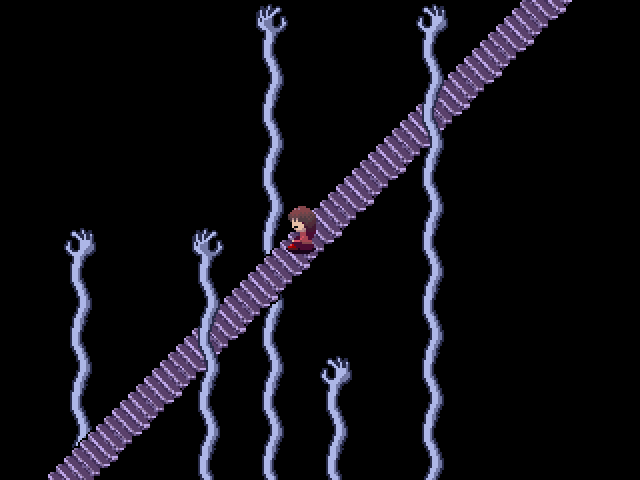 That question sends us down the rabbit hole of determining what exactly are some qualities exclusive to the medium of gaming. After all, each medium is consumed in different fashions and should be produced as such. I hazard that we all can concur that gaming is unique in that it is an interactive medium, not a passively observed one. This results in the (difficult to tap into) potential to allow the consumer to relate to situations; after all, a player experiences a setting and story alongside the protagonist, to some degree. With this in consideration, many of Yume Nikki's qualities can be viewed in new light.

First and foremost, Yume Nikki is a character study. That distressing anticlimax would not hold such sway over us were it not for the surprisingly relatable Madotsuki, a silent protagonist whose very name translates to "window" or "avatar." As we silently journey through dark forest roads and geometrically warped space, a powerful connection to our character is created. Though Madotsuki never speaks, her melancholia is expressed through her animations and the horrifying visual implications buried within her dark dreamscapes. That puzzling level design makes more sense now, for just as Madotsuki's life is aimless and lonely, so are we as we explore the labyrinths of her subconscious, whose spaciousness planes juxtapose with her confining apartment. Because of this, her suffering does not take away from Yume Nikki's exploratory focus but rather synthesizes with it to create an emotional impact. Loneliness, sympathy, fear, anxiety, wonderment, and mystery are all to be found in Yume Nikki. It is not a game of excitement and fun but rather a subtle study of the less appreciated yet no less powerful emotions that shape our identities. 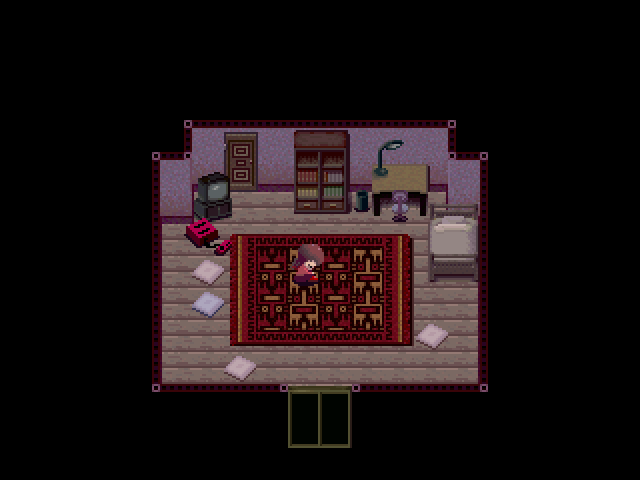 Like all good character studies, Yume Nikki has themes that are universally relatable. Aside from the aforementioned emotional draws, Madotsuki's willing isolation is something we can all surely relate to, for withdrawl into the internal is an instinctive reaction many take upon being hurt by the external. As we see from seemingly benign elements of her mind turning on her -- such as a girl known as Poniko transforming into the monstrous Uboa, or the maternal-looking Toriningen teleporting you into inescapable traps upon contact -- Madotsuki's self-destruction stems from trying to control her life and protect herself from the uncertain intents of others. This is made all the more powerful when considering that Japan, a nation suffering from a severe population and cultural decline as it is, has a growing number of young people becoming shut-ins, avoiding human contact as much as possible. Contextually and universally relevant; it is undeniably impressive to see a work communicate so much so subtly.

It turns out that this apparently plotless game with no dialogue has a lot to say, doing so by atmosphere, emotion, imagery, and, of course, interaction. While its meanings are interpretive; its gameplay, uninspired; and its entertainment value, scarce, it is concrete that Yume Nikki uses its medium in a fashion only a select few other games do. Despite countless fan-game reinterpretations of its mysterious world (as well as a recent official Limbo-style reimagining), there's nothing out there quite like Yume Nikki. For this, it has earned a special place in the gaming world and in my mind.

If you enjoyed this Yume Nikki review, you're encouraged to discuss it with the author and with other members of the site's community. If you don't already have an HonestGamers account, you can sign up for one in a snap. Thank you for reading!

© 1998-2021 HonestGamers
None of the material contained within this site may be reproduced in any conceivable fashion without permission from the author(s) of said material. This site is not sponsored or endorsed by Nintendo, Sega, Sony, Microsoft, or any other such party. Yume Nikki is a registered trademark of its copyright holder. This site makes no claim to Yume Nikki, its characters, screenshots, artwork, music, or any intellectual property contained within. Opinions expressed on this site do not necessarily represent the opinion of site staff or sponsors. Staff and freelance reviews are typically written based on time spent with a retail review copy or review key for the game that is provided by its publisher.