Kid Klown in Crazy Chase, when described, sounds like it was tailored for the Super Nintendo: crisp, colorful graphics with vibrant animations, a kid-friendly premise featuring klowns, and a simple, yet intriguing, platformer idea where you outpace the longest bomb fuse ever. If you take a peek at some images, you'll be surprised to see an unusual perspective, an isometric viewpoint where the game progresses from top-left to bottom-right. You might have noticed obstacles getting in the way of the titular klown, as well. What these screens don't convey, though, is how much those obstacles get in the way. On an average of every two seconds, you'll potentially trip over a bush, step on some tacks, stumble in a puddle of water, get blown away by a gust of wind, and so on.

Everything gets in the way. It's as if mother nature hates you. Borderline divine intervention. The grim reaper wanting it out for you. 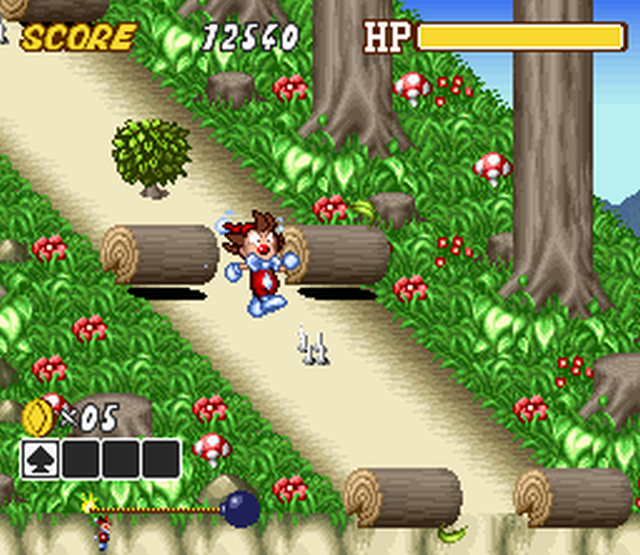 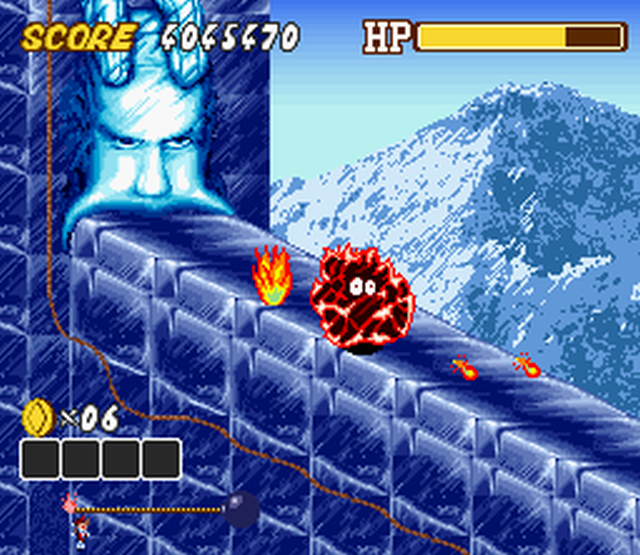 These hazards make for a whimsically clumsy adventure as the devs play up the klutzy klown angle to a T. However, they take this concept too far, as the gag instantly stops being funny when you realize it's messing with mechanics and objectives. The amount of obstacles that get in your way per stage is downright obnoxious, whether it be dodging cannon fire between bushes, jumping over pits while wooden logs chase your character, or hopping over lava pits as fire projectiles leap towards you on a narrow overpass. There's no invincibility frames after getting hurt, either, so you better hope your character doesn't perform some trivial recovery animation which would make him leap backwards or forwards into another hazard... Forcing your klown to a complete stop is doable, but you can only do it so many times before the fuse gains a sizable lead.

There are many instances where you won't even know when a threat is coming, meaning your first few Crazy Chase sessions are going to be infuriating. The second stage alone is a prime example, as you'll be slammed into a wall by a sudden gush of water from a fire hydrant, crushed by car wheels spontaneously rolling out from fences, and smacked by manhole covers that also move if you try walking around. It genuinely feels like the devs stopped trying to make a game just to tell a couple jokes. This is even at the expense of when players are actually pulling off good feats! The rolling log chasing after you? Successfully jump on it for a free, fast ride. But not really, because the game then slams you into the ground and takes away health. Grab a floating device that permits unscathed passage over cannons? No, that would be too logical.

As if these issues alone don't do a fine job torturing you, they also present a bigger issue concerning stage completion. You'd think outrunning a fuse, all while avoiding a barrage of junk, would be enough of a goal, but the devs have an additional condition: collect four card symbols placed in balloons scattered throughout each stage. Failure results in the forced replay of the entire stage for the remaining cards. So, along with being abused nonstop by hazards on a time limit, half of which come with no warning, you also have to do so while grabbing four cards randomly-placed in awkwardly-positioned balloons. Some balloons have traps, but that doesn't matter because you need to check them all... Did I forget to mention the balloons' flimsy hit detection? Oh, you missed the final card? Too bad, restart the whole stage. Or worse, die and restart with your obtained cards taken away. 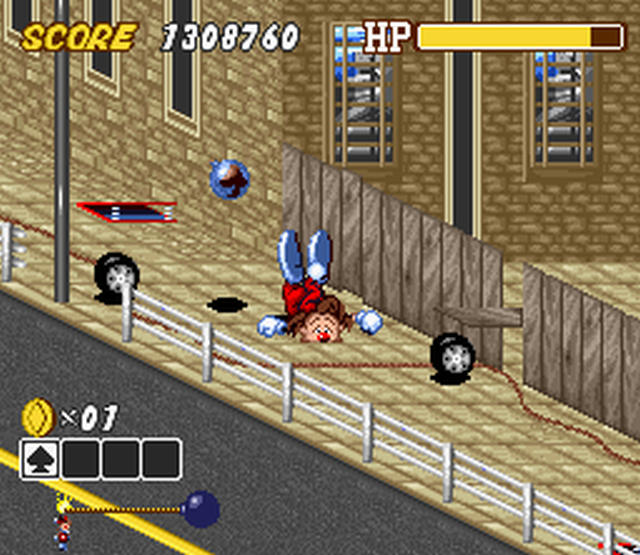 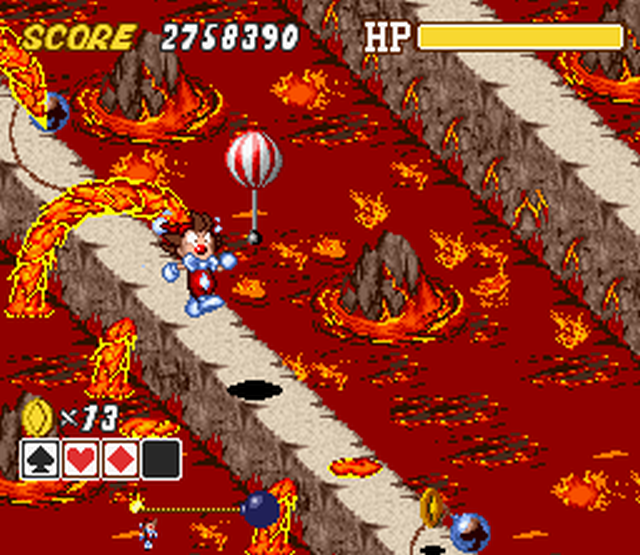 I haven't even mentioned normal video game stuff such as escalating difficulty with each passing stage; the "ecstasy" of running through volcanic territory on thin platforms, where falling off the side is way too easy; the "jouisance" of traversing slippery, icy platforms while dodging huge, ice blocks. Typical areas in an action-style game, but they're absolutely irritating when paired with Crazy Chase's aforementioned flaws. Hilariously, if you complete the game, your "reward" is Hard Mode, which features a faster fuse and more aggressive hazards. Joy. I'm sure the development team had good intentions when devising a "comic" game where the unlikely hero triumphs all, but the execution just stinks. Instead of being in on the joke, Kid Klown in Crazy Chase just feels like you're the butt of the joke, where everyone is pointing and laughing at you.
2/5

If you enjoyed this Kid Klown in Crazy Chase review, you're encouraged to discuss it with the author and with other members of the site's community. If you don't already have an HonestGamers account, you can sign up for one in a snap. Thank you for reading!

© 1998-2021 HonestGamers
None of the material contained within this site may be reproduced in any conceivable fashion without permission from the author(s) of said material. This site is not sponsored or endorsed by Nintendo, Sega, Sony, Microsoft, or any other such party. Kid Klown in Crazy Chase is a registered trademark of its copyright holder. This site makes no claim to Kid Klown in Crazy Chase, its characters, screenshots, artwork, music, or any intellectual property contained within. Opinions expressed on this site do not necessarily represent the opinion of site staff or sponsors. Staff and freelance reviews are typically written based on time spent with a retail review copy or review key for the game that is provided by its publisher.