Umiros one of those games designed primarily for mobile phones thats found its way onto PCs, but the comfortable rant I was about to fall into ends there. Its a good port and it doesnt have a ridiculously inflated price point so Im left with no easy way to finish this review without, urgh, talking about the game rather than bitching about a pet hate. You win this round, Diceroll Studios!

So, lets just talk about the game; Umiros a puzzle-heavy affair where you need to guide Huey and Satura, two kids with amnesia, safely through a danger-packed mini-labyrinth by having them make contact with a crystal. There are various pitfalls that impede their safe passage, mostly consisting of roaming black spheres that destroy you upon contact. The problem is that you never really have direct control over your young protagonists; instead, you plot them a path by drawing a line on the map (using either a game pad or the mouse  both work equally well) then press the go button to see them follow your directions in real time.

Some maps are easier to navigate than others. To start with you only have Hueys safety to concern yourself with, plotting him an escape route that wont end in his premature death. Its equally important to correctly time the start of his run to see him, hopefully, jink around the dangers and reach the exit. The first big obstacle placed in your path is the inclusion of Satura, which forces you to draw individual paths that both characters will follow simultaneously. 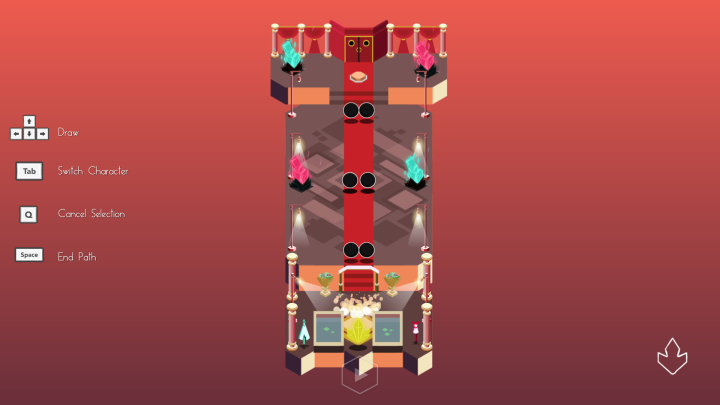 But thats okay; youll soon get used to things. In game, the pair has little to no recollection of their pasts or display any knowledge of their locations. Huey seems to have regained some fractured memories, but Satura is clueless. This makes her understandably untrusting of the weird boy and his insistence that he both knows her and that she should follow his lead through a gallery of death traps. Their understated tale is told through bite-sized cutscenes and simple exchanges between the pair throughout the missions.

They hint that the yellow crystals that inhabit each stage might be their lost memories made physical, but collecting them is never made obligatory. For the most part, all you need to do to complete each stage is get them both to their respective exits. But it never remains as simple as drawing them a wavy path around danger and timing your press of the start button to perfection; soon, deadly fog barriers block potential paths, only shut off by buttons matching their colours situated around the map. The issue here is not only timing it so Huey will press a button and dispel a fog wall before Satura strolls into it and dies, but that each button can only be used once. Sometimes, pressing a button will shut off one wall and activate another, and poor planning results in permanent dead ends you cant plan around. Happily, Umiro is loath to overly punish you, and you can simply restart the stage without penalty.

It does often mean some progress loss though; as stages go on, they become segmented, presenting multiple exit crystals you need to tick off in any order you please. Only the last remaining exit will free you from the stage, meaning the ones you hit in in between work as checkpoints. Any death you face after you activate them spawns you back to your point of contact rather than forcing you all the way back to the start. Sometimes it makes the levels more manageable, letting you tackle it in chunks and making mistakes less punishing. Other times, it simply means spending more time inside the danger zone. 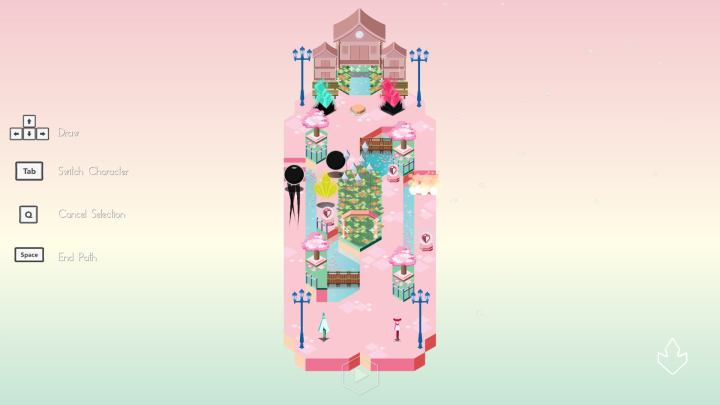 In time, other little quirks appear to either hurt or hinder you. Collectable items let you absorb one fatal hit, or freeze the globe patrol in place for a few seconds. Sometimes it helps you bypass some of the more stubborn dangers; other times it means employing a more complex escape route, having a character run around in circles for a spell to get the timing right. Having the means to freeze an obstacle in place is all well and good if you can do so while its out of the way, but becomes a suicide pact if you time it wrong and have it block your partners escape route instead.

There are four chapters in total, each containing ten puzzles (and a secret mission preset to a harder difficulty for masochists), which makes Umiro an ideal game to attack in little chunks. Thats not how I played it though; its ridiculously easy to tell yourself youll just do a stage or two while you have a pocket of dead time, then find an hour has passed and youve worked through an entire chapter. Theres a commendable amount of accessibility in solving the games puzzles which means you can either sleuth it out or try to blunder your way through via trial and error. Its a game that actively wants you to complete it, never setting the hurdles too high, but retaining enough challenge to keep you interested and not devolving into a casual stroll.

Its the rare tale of a mobile port done right. I suppose Ill just have to accept that.
4/5

If you enjoyed this Umiro review, you're encouraged to discuss it with the author and with other members of the site's community. If you don't already have an HonestGamers account, you can sign up for one in a snap. Thank you for reading!

© 1998-2021 HonestGamers
None of the material contained within this site may be reproduced in any conceivable fashion without permission from the author(s) of said material. This site is not sponsored or endorsed by Nintendo, Sega, Sony, Microsoft, or any other such party. Umiro is a registered trademark of its copyright holder. This site makes no claim to Umiro, its characters, screenshots, artwork, music, or any intellectual property contained within. Opinions expressed on this site do not necessarily represent the opinion of site staff or sponsors. Staff and freelance reviews are typically written based on time spent with a retail review copy or review key for the game that is provided by its publisher.