The first Witch & Hero may not be anything special or unique within its genre, but I can't help but admire certain aspects of its framework. To go along with the simple, cutesy 8-bit renditions of a fantasy world, the game strips most of the tower defense concept to its core for a very basic experience; an experience that's ultimately unimaginative and easily forgettable, but one that works when playing through it for the first time. In an overhead perspective, on an unmovable screen, your Hero must protect the Witch, turned to stone, from monsters and animals coming from all corners. That's the game. Sometimes you get to use the Witch's magic powers briefly, sometimes you get to use both characters in a combo attack. But that's still all the game has to offer. However, there's an element of depth to be had with its simplicity.

This challenging simplicity makes a reappearance in Witch & Hero III. To hit enemies, for example, you just have to bump into them, Ys-style. However, this causes damage to your Hero, and when done enough times, he becomes unconscious until you refill his life by shaking the analog pad. Of course, passing out puts the Witch in danger. There are tactical workarounds to this, such as hitting enemies from behind to inflict greater damage, letting health items lie on the field until needed, or intentionally passing out early, so you have enough life when enemies get closer. Easy in the early-goings, but when foes appear in huge numbers in later stages, you really need to focus. Failure causes the incapacitated Witch to crumble in pieces, and the halved deduction of any gathered money and experience points. 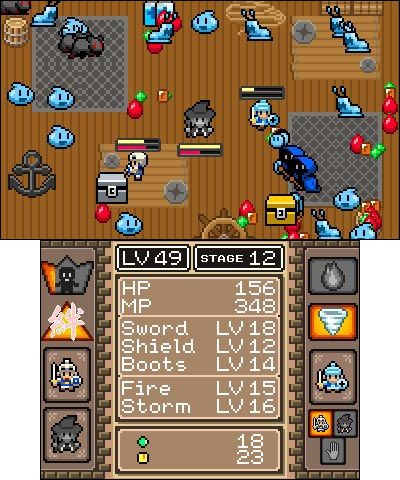 Returning to this core is all good and well, but... not if copied nearly to a T, which is what the first nine or so stages feel like. There are faint differences, such as blood points being harder to gather when a stage starts, which are vital items for summoning special attacks. Also, unless you grind like crazy to strengthen your protagonists, most enemies usually take longer to kill, meaning more unconscious moments. But other than those changes, the early stages come off as a "remix" of the first Witch & Hero with different backdrops, different music, and some new creatures to encounter. This worried me; I was mildly entertained by the original, but not so much that I was willing to revisit the same game under a slightly different title!

The nature of a sequel can often be a series' greatest downfall, ironically. Give people the exact thing that made the first fun, and people will complain that they spent money on the same thing. But stray too far from its ideals, and it could ruin the IP for years.

The worrying escalated when I reached the tenth stage, where I was given control of two characters at once. This was Witch & Hero II's main gimmick, and it made that game absurdly easy, due to the fact you could move the Witch without consequence. It's literally moving a goalpost around. However, my anxiety was quelled when I realized that, instead of having to move the Witch, I was given control of two Heroes, one controlled by the analog pad and the other with the A/B/X/Y buttons. This is actually better, because no matter how much I tried multitasking around the screen, enemies still zero in on the centered Witch; my doubled power wouldn't mean anything if I couldn't protect the unmovable sorceress. Controlling both Heroes is actually tough on one's senses, too, especially when things get hectic and they're on opposite ends of their control schemes...

Surprisingly, a scant few stages later, another new special move was introduced. Called Bond, this ability allowed me to summon a "barrier" of sorts, which formed in the shape of a triangle based on the position of the two Heroes and the Witch, but only if both Heroes are conscious. When activated, any foe within or beside the triangle is flung away, and if lucky, they'll get pushed back to the edges of the screen. Additionally, the Bond meter auto-refills in mere seconds, meaning I was able to use it in rapid succession.

It sounds like a ridiculously overpowered move, and could have easily broke the game if designed poorly.

Having said that, Bond is the best thing to happen to Witch & Hero III and the series.

This one element drastically changes the flow of battle; with so many abilities in the player's grasp, from special attacks, two Heroes, and now what's basically a parry move with unlimited uses, this gave the devs an excuse to literally engulf the field with enemies. The stakes have been raised considerably, and the game's team managed to pull it off without betraying the essence of combat. It's still very much a juggling act between using attacks and what to do when someone is on the verge of collapse, but on a more aggressive, screen-filling scale. Can you accurately navigate two Heroes when they're on inverted sides of their controls, successfully fling away 15 enemies at the same time, and direct your special attacks in the appropriate direction filled with 20 beasts? Before a single foe touches the Witch, who is one hit away from destruction?

Sometimes all that happens within the first minute of a stage...

The introduction of Bond and the calamity that follows give the mid to latter stages of Witch & Hero III a feeling of urgency and liveliness; this was something sorely missing in previous installments. The first game was smart by ending the adventure as repetition started setting in, and the second game just... it was a tragedy from the beginning, so you can imagine how the late batch of stages felt. Though, just like its predecessors, the difficulty spike can be offset by grinding for better strength and defensive capabilities. However, a ton more grinding is required here, as stages are still tough after a couple upgrades. It's apparent the devs actually want players to persevere, rather than feeling as if they're dragging their feet, waiting for stages to conclude. 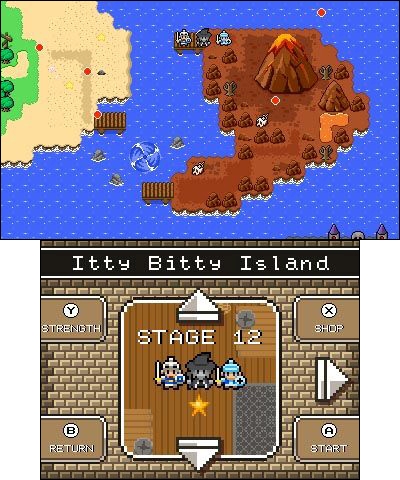 Like the first game, Witch & Hero III isn't really special or unique. It doesn't inherently do anything unique that dozens upon dozens of titles in and outside of its genre haven't done already. But it's a charming tower defense release that presses just enough buttons to entertain all the way to the end, and does so while staying true to its roots. Witch & Hero III ultimately does what the second game somehow failed to do: took the simple template of the original game, simply modified certain aspects, inserted simple additions, and successfully transformed the core into a harder version of itself in the simplest way possible. I entered concerned for the IP's future, but in the end, with a lot of positives present, I left hoping for a Witch & Hero 4...
4/5

If you enjoyed this Witch & Hero III review, you're encouraged to discuss it with the author and with other members of the site's community. If you don't already have an HonestGamers account, you can sign up for one in a snap. Thank you for reading!

© 1998-2021 HonestGamers
None of the material contained within this site may be reproduced in any conceivable fashion without permission from the author(s) of said material. This site is not sponsored or endorsed by Nintendo, Sega, Sony, Microsoft, or any other such party. Witch & Hero III is a registered trademark of its copyright holder. This site makes no claim to Witch & Hero III, its characters, screenshots, artwork, music, or any intellectual property contained within. Opinions expressed on this site do not necessarily represent the opinion of site staff or sponsors. Staff and freelance reviews are typically written based on time spent with a retail review copy or review key for the game that is provided by its publisher.