Perpetrated mainly by those pesky Indie devs, theres been a growing trend of taking popular genres and devolving them back to the 8bit days. Thats where we stand with Tinywars, which approximates the RTS format and pretends really hard its the NES generation all over again. Its clever about this; it knows its not going to be a 1980s reinvention of Supreme Commander 2, so it scales everything right back and focuses hard on funds gathering and base building.

For the most part, this never deviates from the well-trod RTS formula. You have various factories you can use to manufacture different kinds of units. There are five in total; a base that spits out soldiers, two that produce ground-based artillery and two that offer an aerial threat. On top of that, you have limited defensive options that start with a puny, cost effective watchtower and expand into considerably more expensive options comprising of armoured pillboxes or anti-air placements.

The idea is to take over a map, which is pretty easy going in the opening few stages. Each area of land is governed by a headquarters and, if that should fall, the area is lost. To begin with, all you have to do is stem the tide of invading forces and ensure your outgoing armies can overwhelm any defences in an effort to take enemy HQs before they take yours. So you bolster your perimeter with makeweight watchtowers and you send countless infantry to an inglorious death while your funds grow silently in the background, eventually allowing you to produce tanks, or mow down enemy support with machine gun fire. 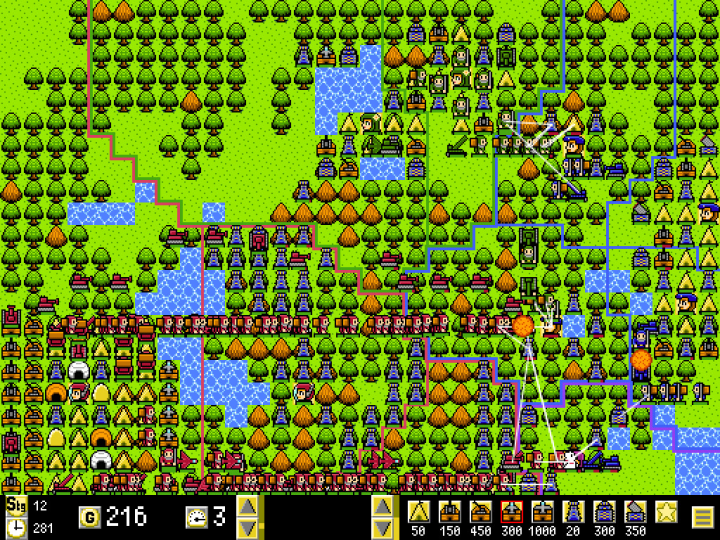 The key is clever factory placement. Unlike RTS games that havent been de-made, produced troops dont stand around waiting for you to lasso them all together and give them their orders. Rather, they immediately start their unstoppable march towards the nearest enemy HQ. If they come across anything in their path, theyll make a play at destroying it. Factory buildings offer a counterattack of sorts, but are easily destroyed by even a half-hearted convoy, so it makes sense to put them somewhere out of harms way, like at the back of your area. However, the further away from the battlefront they are, the longer it will take each wave to reach the enemy, giving them more and more time to rebuild lost defences.

This isnt a big deal in your opening exchanges, where youre pitted against a single enemy, but, soon, other challengers appear, cluttering the map up with multiple armies of different colours. Eventually, the clutter gets even worse with free cities, independent from you or your opposing Generals control, taking up sections of the map. Suddenly, youre not just fretting about defending one access point into your lands from a non-stop trickle of enemy troops, but three of four. If you do nothing but defend, then your enemies are free to flood their lands with factories that will eventually overwhelm you. If youre overly aggressive, then youre forced to scrimp on your defence network and can be easily overrun.

You can safeguard against this a lot of the time by being picky on what map you wage war on. Each stage offers you four randomly generated areas which can be refreshed an infinite amount of times. Generally, you want to find a map that tucks your occupied lands safely away in the corners as far away from the majority of enemy camps as possible. Because any and all troops will automatically advance on the nearest enemy HQ, you can keep flicking through maps until you find one that guarantees the opposing forces squabble amongst themselves, leaving you relatively free to grow in strength on the outskirts. Theres something to be said about this being a cheap tactic (and one that could have been avoided with limited refresh opinions), but its equally fair to say that some maps land you in a completely unwinnable situation. Being stuck right in the middle of a map within spitting distance of several different enemies means that any fledging defences you build arent going to be enough. 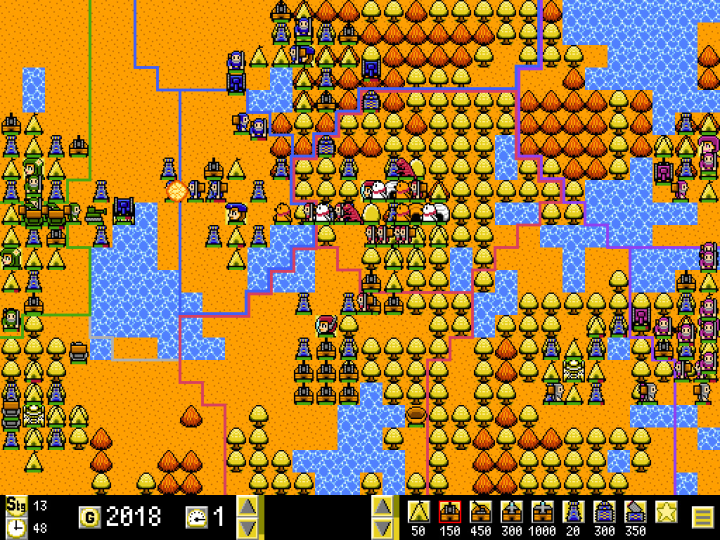 A good defence is key; in a clever design choice, enemy HQs cant be taken down by anything other than infantry, so while its all well and good marching in heavily armoured tanks and filling the skies with fighter planes, you need to escort your squishy human soldiers through the defence network to take a plot of land. So you spend of a lot of your invasion trying to whittle down machine gun embankments enough so your troops can get far enough into camp to matter. It means that you cant just win the game by amassing the biggest rolling army of tanks and artillery; you need to keep up a human presence, even if they will maintain a ridiculously high mortality rate.

It helps that theres an option to run the game up to nine times faster than standard once you have all your pieces in place and just need the war to play out quickly and, thanks to this option, each map can be conquered or lost fairly quickly. As TinyWars rolls on, the environment plays more and more of a part, sometimes offering things like grizzly bear units randomly spawning on the map, friendly to whichever Generals lands they manifest in, or tough alien-tech defence towers randomly popping up to blast at your foes. So youre not going to get the multi-hour slugfests of modern day RTS, but youre also going to get a complete absence of multiplayer options and an interface lifted so obviously from touch screen media that it still says press screen to start.

Its brevity of war gimmick means its well suited for the mobile market I assume it was initially designed for, but thats not to say it doesnt work on the PC. With a campaign offering significantly harder landscapes and a greater numbers of foes the further you advance, the ability to play warlord in your lunch break isnt without appeal. TinyWars is a strategists quick fix; a smug run at world domination that isnt going to destroy your evening.

If you enjoyed this TinyWar high-speed review, you're encouraged to discuss it with the author and with other members of the site's community. If you don't already have an HonestGamers account, you can sign up for one in a snap. Thank you for reading!

© 1998-2021 HonestGamers
None of the material contained within this site may be reproduced in any conceivable fashion without permission from the author(s) of said material. This site is not sponsored or endorsed by Nintendo, Sega, Sony, Microsoft, or any other such party. TinyWar high-speed is a registered trademark of its copyright holder. This site makes no claim to TinyWar high-speed, its characters, screenshots, artwork, music, or any intellectual property contained within. Opinions expressed on this site do not necessarily represent the opinion of site staff or sponsors. Staff and freelance reviews are typically written based on time spent with a retail review copy or review key for the game that is provided by its publisher.