I always try being open-minded with every new game I approach, but in certain situations, it's downright difficult to pull off. Case in point: the irregular design of the first two Dark Witch titles has deflated any potential enthusiasm I could have had going into the third game. The first game, a 2D action-platformer, takes some very noticeable cues from the Mega Man and Gradius franchises, being able to chose stages in any order, gaining boss abilities after their defeat, and activating power-ups by building a meter til it lands on a desired power. It has very generic stage designs with lackluster enemy placements, making the challenging boss fights its only true saving grace. At the very least, it gave hope for a solid sequel. Yet, Dark Witch 2 somehow made everything more generic and lacking... even the boss fights. On hard difficulty, no less.

At this point, I just wanted The Legend of Dark Witch 3 to be decent, which is a messed up expectation to have for any game. Though... the first stage I chose, Millennium Bridge, put me in a worrying state; the stage essentially takes place on a linear path, with open space galore, meaning I was able to dispose of minions from across the screen without much retaliation. Another aspect that gave me doubts about the game's quality is how I was given the limited ability to heal, one heart at a time, from the get-go. This was never a thing in the first title, and it was something you had to purchase in the second game. Not exactly the best first impression. 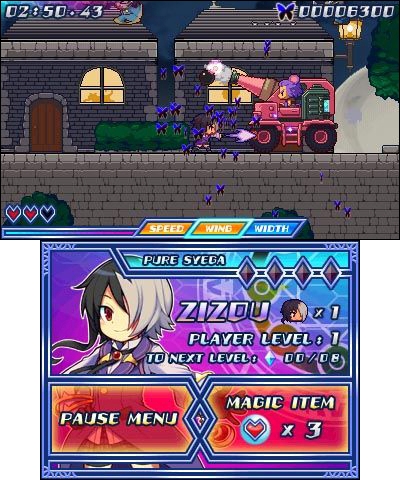 However, once I invested more time into the game, something absurd occurred: the realization that I was playing a legitimately solid Dark Witch product. The boss fights and the actual stages, I should add. And above that, I was experiencing an overall good action-platformer?? This is mainly because Dark Witch 3 does something the previous titles had so much trouble conducting within the actual stages, and that is making the actual layouts, the enemy placements, and the gimmicks function properly... and together.

For instance, the Neural Reality stage, a crystallized location, begins with a gimmick where you must carefully traverse an area that can go pitch black, and the only way to light up the place is to step on small platforms placed about. You must do this while carefully avoiding pitfalls and floating crystal enemies that love tossing rapid fire projectiles in your direction. That's just the first half of the stage. The second half involves some genuine platforming action using black hole blobs, which are objects you can stick to, but then vanish the moment you try jumping away from them. There are sections where the only way to reach a hill is by going through a series of black holes, and the game doesn't make it easy here; an entire gang of strategically-placed rapid-fire crystals and blobs encased in spiked-rings await you.

Other interesting stage ideas include a townscape where you can choose to travel on rooftops or the pavement below, a borderline Castlevania-esque clock tower that feels like a maze, and a bustling garden location with giant, bouncy leaves galore and a constant assault of huge, falling peas. Now, not every stage in Dark Witch 3 is as cleverly-packed as the aforementioned ones, but that's really fine. Why? Because even the "mundane" stages somehow strive at being better than most of what the previous games had to offer; there's still just enough decent structuring and sensible enemy placements with threatening attack patterns to satisfy.

After the abysmal execution on display in the second game, the return of engaging, fun boss battles was also a much welcomed sight to behold. While every fight can be summed up as "crowd control" patterns, that's pretty much what's needed in enclosed environments of this nature. One boss, for example, basically spits out a wall of indestructible orbs, all while pushing them towards your current location using a gust of wind. The only thing that can be done is delay some of the orbs with projectile attacks as you manipulate the wind's direction. And you barely have enough time to open a gap before the boss decides to perform a dash attack.

To name a few more boss attacks, one involves consecutive doppelganger leaps where the copycat is slightly delayed, another boss swings on tree branches using a yo-yo as projectiles plunge in random spots, and what is easily the best librarian boss in the whole series; the latter tosses piercing projectiles in frantic succession, rows of flame pits to dance around, and literal rings of fire to leap through, never letting up. Again, not all are top tier in performance, but they all still encourage slick coordination on your part, since most attacks require you to squeeze through tight spaces for survival. When I fought a couple bosses for the first time, I actually got happy losing a life, because after the second title's disappointing confrontations, I never thought I would again feel cornered and outmatched in a Dark Witch game. Oh, and that ability to refill health? Yeah, you need that. 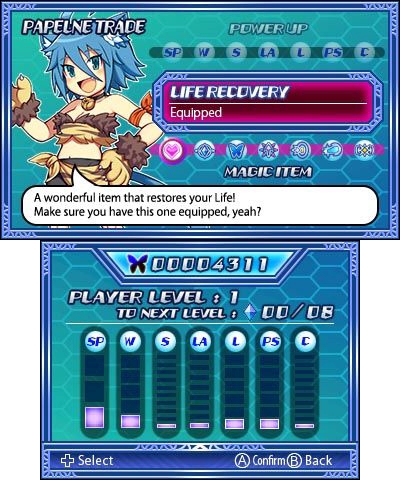 It's clear a lot of thought was put into Dark Witch 3, and that further extends into modifications, adjustments, and the removal of certain mechanics and elements. Probably the two most noticeable changes right from the start are the reduction of the power-up bar from five slots to three, and the absence of obtaining boss abilities after their defeat. The parry move has also vanished, though considering it felt more like a novelty skill, it's not much of a loss. There's more that was scrapped, but the gist of it is: the devs removed a lot of fluff. A lot of people probably disagree on them being trivial elements, since they bring variation to the game; I'm all for variety, but not if the stuff feels like it's... there... just to be there. Are they really worth having if the devs won't put actual value or improvements to said features, in turn having no noticeable merit to the overall product?

An example of actual enrichment can be seen in the form of the revamped upgrade system. In previous installments, you're able to upgrade specific abilities, such as strengthening your base projectile power, gaining more lives, or adding health slots, simply by grinding points off defeated enemies. The same is done in the third game. However, after upgrading for only a tad, you're prohibited from making additional purchases. In order to make progress on this front, you'll need to search for crystal pieces hidden within each stage. This "treasure hunt" aspect has also been in prior games, but it always felt like an afterthought. Here, though, its now been given an actual purpose, being fused with the upgrade system, prompting players who seriously want stronger upgrades to go out and actually work for them.

Considering the way Dark Witch 2 "evolved" from the first game, I seriously figured the series was going down an unfortunate path. Then Dark Witch 3 happened... and I'm still surprised the game exists in its completed form. And despite their differences, this and its immediate predecessor have a lot in common, since they basically have similar templates: same amount of starting stages, each with difficulty ratings, followed by the same amount of intermediate stages, nearly the same type of extras, and so on. In that regard, The Legend of Dark Witch 3 almost feels like it originally existed in an alternative reality, one where it directly followed the original game in place of our second game. But then someone peeked in that reality, saw how good it was, and recreated the game in our universe...

If you enjoyed this The Legend of Dark Witch 3: Wisdom and Lunacy review, you're encouraged to discuss it with the author and with other members of the site's community. If you don't already have an HonestGamers account, you can sign up for one in a snap. Thank you for reading!

© 1998-2021 HonestGamers
None of the material contained within this site may be reproduced in any conceivable fashion without permission from the author(s) of said material. This site is not sponsored or endorsed by Nintendo, Sega, Sony, Microsoft, or any other such party. The Legend of Dark Witch 3: Wisdom and Lunacy is a registered trademark of its copyright holder. This site makes no claim to The Legend of Dark Witch 3: Wisdom and Lunacy, its characters, screenshots, artwork, music, or any intellectual property contained within. Opinions expressed on this site do not necessarily represent the opinion of site staff or sponsors. Staff and freelance reviews are typically written based on time spent with a retail review copy or review key for the game that is provided by its publisher.