Know it or not, youve probably played a game thats at least similar to Jump Gunners. It revolves around a simple premise; offer up a 2D map filled with platforms and bottomless pits, then pepper the entire area with a literal overkill of wildly assorted weaponry. Then go to town killing everyone you can find via unspeakable violence.

Games like ZP2KX and Duck Game follow the same kind of formula, but Jump Gunners offers a new twist; it dials up its weapons recoil and then presents it as a viable way to fling yourself around the mapscape. By firing a torrent of bullets at the ground, you can launch yourself skyward and, by adjusting your scope of fire, you can turn your sidearm into an impromptu jet-pack of sorts. One still ploughing deadly artillery into the ground below you, likely to chew up anyone foolhardy enough to be plodding beneath. Its a new definition of death from above.

Each of Jump Gunners assortment of weapons behave differently; equip a flamethrower and you have the closest thing to an actual jet-pack, while something like a rocket launcher provides a much more sudden and explosive bout of velocity. Other weapons like assault rifles, miniguns and sniper rifles, exist somewhere in between. With a little bit of practise, you can use these weapons to effortlessly guide yourself to higher roosts, or to zoom forwards and backwards into or away from targets. It invites chaos. 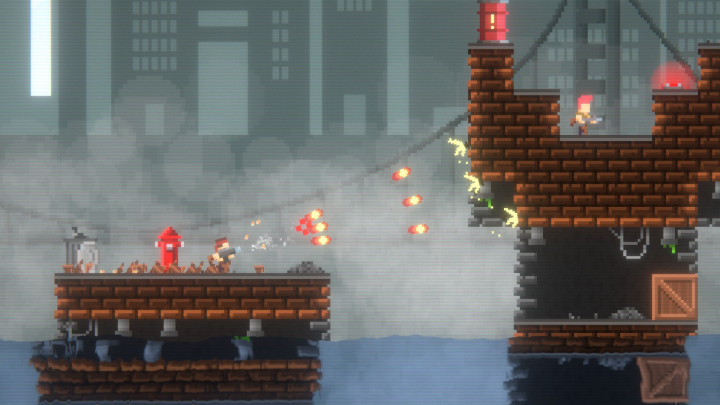 Get a few friends together, and playing a deathmatch is nothing short of insanity, consisting of little isolated moments of pure luck youll swear blind you meant. Try to steer a column of bullets towards an airborne target and youll sometimes fling yourself off the platform towards certain death, or accidently hurl yourself to safety as someone else pings a volley of rockets at you. You cant stay floating above the arena without consequence forever; taking shots at other players will send you wildly off course, as will trying to evade enemy pot shots. But taking to the air gives you certain advantages when compared to the lumbering pedestrians who choose to shuffle about on the ground. Its just that stability isnt one of them.

But  and its a big but  the vast majority of Jump Gunners appeal will evaporate unless your PC is configured to host local co-op players. Playing solo doesnt really work, especially in the deathmatch stakes. With no online options and no way to insert bots into your game, its single biggest draw is lost.

It does attempt to make up for this; there are options available for lonely players with no one to game with. There are twenty four missions available where youre tasked to zip around various maps and shoot targets while a timer ticks down in the background. Some of these are as simple as locating floating platforms lurking above your starting point, and some of these are Meat Boy-esque death traps that assume youll die multiple times, so let you respawn with your previous progress intact. These arent bad additions by a long shot; trying to keep yourself floating above a spike pit by the grace of an assault rifle as you glide past the mutilated remains of failed attempts is a decent way to spend your time. But its not what Jump Gunners main selling point is. 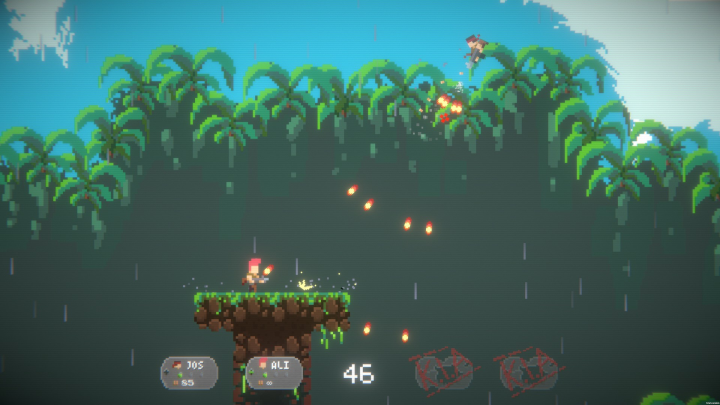 Its telling the puzzle stages (as well as another decent add on, Turkey Hunt, a clear rip off homage to NES classic, Duck Hunt) only feature the assault rifle, because the rest of the weapons are saved for the frantic bedlam which is the multiplayer mode. The commendably responsive one-man developer has publically stated that online features arent included for all the right reasons  he doesnt want them in his game unless he can be sure theyre fully working features that complement the effort hes already ploughed in to his project. Online options remain a goal, but only if it can be correctly implemented. The ability to insert bots is being prototyped but will only be included if they can replicate human players to a decent degree. He doesnt want games filled with lags and disconnects. He doesnt want artificially bloated lobbies populated with shambolic easily-annihilated bots.

I hope hes able to meet those goals because, right now, Jump Gunners is an excellent foundation that could be built into a real surprise package. If you have the means to couch co-op and a few friends you dont mind falling out of contact with once they spam a few lucky rocket attacks and you vow never to talk to them again, its a great addition to a multiplayer rotation. If not, watch this space. It might just evolve into something that devours your time.

If you enjoyed this Jump Gunners review, you're encouraged to discuss it with the author and with other members of the site's community. If you don't already have an HonestGamers account, you can sign up for one in a snap. Thank you for reading!

© 1998-2021 HonestGamers
None of the material contained within this site may be reproduced in any conceivable fashion without permission from the author(s) of said material. This site is not sponsored or endorsed by Nintendo, Sega, Sony, Microsoft, or any other such party. Jump Gunners is a registered trademark of its copyright holder. This site makes no claim to Jump Gunners, its characters, screenshots, artwork, music, or any intellectual property contained within. Opinions expressed on this site do not necessarily represent the opinion of site staff or sponsors. Staff and freelance reviews are typically written based on time spent with a retail review copy or review key for the game that is provided by its publisher.