Games that intentionally aim for a very basic play and design style always fascinates me, because when utilized properly, they can actually become some of the most well-crafted, addicting titles in the medium. That's why I was immediately drawn to Drancia Saga for its potential, which, at first glance, smacked me over the head with pixel, retro-inspired graphics of "plain," super deformed characters with minimal animation. Investigating further, I found out that it's a horizontal action game which takes place on a single screen per stage, where the protagonist fights an onslaught of enemies until the boss appears. Keeping with the simplistic theme, the character is constantly in a state of movement and automatically kills enemies when contact is made with their weapon; the only thing players have to concentrate on is turning and jumping. In a sense... 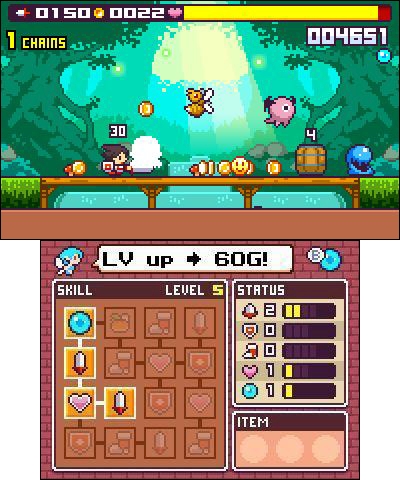 Running back and forth, disposing of grunts, which are mostly blobs of varying colors, is an easy task for any gamer. However, the devs tossed in "special" enemy types to go along with the horde, such as flying, one-eyed beings with no attacks, or creatures that stand at the edge of the screen, shooting projectiles. Some projectiles even temporarily trap you inside segments of the battlefield when they hit the ground. Still sounds very simple, but remember, all this is happening on a single, closed-in screen. It quickly becomes chaotic. So much so, that it's easy to lose your composure under pressure and have chunks of the health meter depleted because you kept bumping into enemies that aren't connecting with your weapon.

Graciously, you have a decent-sized meter, and coins that drop from fallen foes slightly refill bits of your life. Coins also act as experience points, which can be used in a skill tree to upgrade such things as extending reach of your weapon or strengthening defense. You can even gain a magic attack. Though, depending on what type of character is picked, from weapon-based heroes and witches, to a bear that attacks with a skeletal fish, strengths and weaknesses will vary. They're practically difficulty settings. So while Drancia Saga is still a very basic concept, the devs did their best in taking such minimal material and using them to create a hectic-style action product; you have to avoid getting hurt by huge groups, but at the same time you need to charge into groups just to replenish health and bolster abilities. It's a frenzied balancing act.

Shame it's such a short game, clocking in at just eight brief stages. However, that's for the best: by the time I reached the sixth stage, it already felt like the game ran out of ideas by reusing enemies en masse and the skill tree nearly being maxed out. I would have liked a longer experience, but not if the extremely small dev team of two weren't going to expand on its ideas and enemy types. I mean, Drancia Saga already "extends" with a second loop, which only slightly alters gameplay by having a huge, slow-moving entity floating around each stage. I don't consider it a true a loop due to very minor modifications, unlike what you see in shoot-em-up loops, but there's a semblance of challenge in having to reach the second loop; as far as I know, you can't die once in the first playthrough in order to reach the second one, and it all has to be done in one session.

Outside of length, the game does have some other minor issues. The skill tree, for example, feels like an unnecessary, tacked-on aspect, and that's only because upgrading is extremely restricted. Want to power up your weapon-savvy character to have more magic attacks? Too bad, you can usually only upgrade magic once, and vice versa for strong magic users wanting physical strength. Also, this game has a shop where you can buy special items to aid in each playthrough. Problem is, I never once had to purchase an item, especially when I played as weaker characters. It's just... there... to stifle any challenge the game has for those wanting Super Easy mode. But the shop is optional, and the skill tree truly doesn't harm the core game in any way. 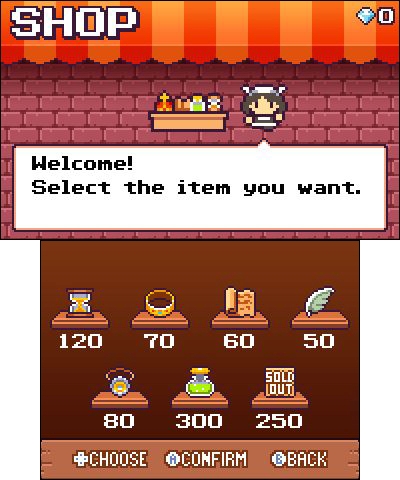 At best, Drancia Saga serves as a quick time waster if you're not looking to dive into anything long or complex, and its manic approach ensures you'll be getting a workout in that brief span. Considering it was originally released for the iOS and Android a few years prior, I guess that was always the point. Though, I would really love to see the game's core ideas expanded into something bigger, as it would be regrettable to have this only see the light of day in a product that's essentially an entertaining proof of concept pitch.
3/5

If you enjoyed this Drancia Saga review, you're encouraged to discuss it with the author and with other members of the site's community. If you don't already have an HonestGamers account, you can sign up for one in a snap. Thank you for reading!

© 1998-2021 HonestGamers
None of the material contained within this site may be reproduced in any conceivable fashion without permission from the author(s) of said material. This site is not sponsored or endorsed by Nintendo, Sega, Sony, Microsoft, or any other such party. Drancia Saga is a registered trademark of its copyright holder. This site makes no claim to Drancia Saga, its characters, screenshots, artwork, music, or any intellectual property contained within. Opinions expressed on this site do not necessarily represent the opinion of site staff or sponsors. Staff and freelance reviews are typically written based on time spent with a retail review copy or review key for the game that is provided by its publisher.