Ever wonder why the Super Mario franchise has become the ubiquitous mega-franchise it is today? Indeed, how have a pair of running and jumping plumbers have become the oasis of entertainment in an industry flooded with imitators? Thats a little broad a subject for this retrospective review, but we can make a study of Alien 3 as an example of what does not make a fun platforming game.

But first, the premise: You are Ripley, the mother-warrior alien slaughterer of Aliens fame. We find our heroine stranded on a space station overrun with Xenomorphs, to put it mildly. How she arrived there and what shes doing is anybodys guess and Probe isnt giving out any hints, not even a images from the movie or crimson text to explain the situation. Instead, the game opens up with a movie style rendition of the title sequence and then drops us ceremoniously into the thick of it with her trademark flamethrower taped to a machine-gun.

How is it everything Ripley does in Alien is so badass and everything she did in Alien 3 so forgettable? Probe Entertainment helmed this massacre in 1993, and dont think their genre choices were limited just because the of the SNES hardware, because there are hundreds of examples of coding prowess on the console. It is evident to me, however, that they played to the strengths of the hardware: Overlays, transparencies and hardware accelerated scrolling. Lots and lots of scrolling. 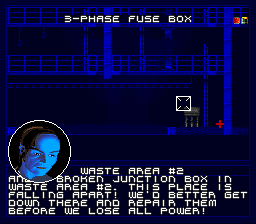 So, Ms. Stranded On A Space Station With Nothing To Kill but Aliens, whats next? Why, terminal assigned missions of course! Enjoy blue pixel art of Sigorney Weaver staring at the screen, because thats all youre getting. Frankly, for all of the military greens, greys and sepias, Aliens 3 isnt actually bad looking. Probe makes a moderate effort to give us something to look at, and Ripley  bald as the station is infested  is animated with some fluidity. Her movement physics dont reflect this at all, but she does jump and run in a responsive manner.

Its when you have to start shooting things that the problems begin. Anything that can be hit just standing and is okay for the most part, but its those creeping facehuggers thatll be the death of you. By the time you press down to crouch its usually too late to slap a thumb down on the flamethrower or machine-gun, and voila, youve taken a hit and lost 6% of your health. Death by inches is Probes chosen tool of torture. The trouble is that Ripley isnt fast enough to shoot them all, and hit boxes are a mishmash of poorly conceived design. Some of this is inherent to the nature of the characters, but it just seems rushed to me. 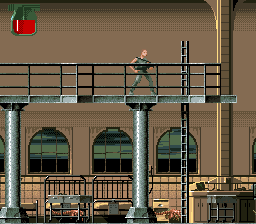 That wouldnt be such an annoyance if they werent randomly spawning around you all the time. Memory constraints were an unavoidable reality of the SNES, because you had to pare back the graphics to keep track of all the enemies on screen which means they can endlessly respawn. It was a common problem often mitigated by distancing enemies from each other, or providing environmental warnings to the player. Play the first level of Super Mario World and youll see what I mean. Alien 3 employs large digitized backgrounds and platform sprites to good but largely bland effect. Ridleys relatively smooth animated sprite dominates the majority of system RAM. So much so that you might not even notice the aliens arent animated with more than three frames. When you do notice it  youre welcome  the it is a glaringly unattractive indicator of where corners were cut.

Even though ammo and health are infinite where they appear on the map, Probe is totally draconian about continues and extra lives. Spoiler: You only have one life to live, and continues are handed out only after completing a stage, not after each completed mission. The means after staring at the slobbing jaws of the Xenomorph that presumably had its way with you, you get to do it all again. Adding insult to injury is a sample of that private crying Game Over, Man! Is that a goading theyre using as encouragement?

No thanks, man. Alien 3 wasnt fun in 1993 and it doesnt have any retro charm to make it a worthy consideration for anyone other than die hard memorabilia collectors. What is retro charm, you ask? The short answer to that is nostalgic buzz. Yknow, that feeling that Nintendo counts on you experiencing when they sell us Super Mario World for $12 (CDN) twenty-six years after its original release. Youll buy that, but no one is scrambling to serve this one up hot or cold in emulation on a mainstream console, and thats the point. 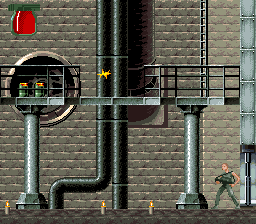 What Alien 3 does well is countermanded by phoned in missions that have no impact on the stage youre playing. For instance, sealing up Medic Bay #8 is supposed to seriously curtail alien movement, but even after the fact they relentlessly spawn to demonstrate Probes idea of difficulty. Which is, in point of fact, lazy. It wouldnt bother me so much if Ripley could reliably kill em, but with limited munitions, a few missed shots just amp up my aggravation and leads to inevitable game over screens.

Alien 3 does not follow in its cinematic footsteps and instead presents Ripley as the female Rambo sans any sort of motivation that leaves us with an emotionally, mechanically facile game. Theres more, you say? Did I forget the grenades? No, decidedly not. The screen is too crowded to play with them, and all they do is go pop. No bouncing or rebounding physics. In short, theyre no fun, and in such limited supply theyre relegated to the weapon of last resort. 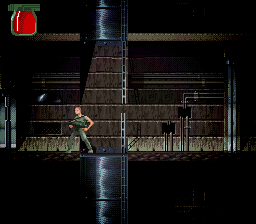 Which nearly brings me to the conclusion that this game is also one of those, except for the music. The SNES had one significant advantage over its competitor, and that was sampled audio, though its not exactly put to good use here. Some of the music is energetic, and there are themes affixed to mission types, but they will slip from your memory pretty quickly. Thanks again to capacity limitations, a corner cut in the name of cost, everything is muffled and lacks any attack to amp up the tension. Remember how fearsome that machine-gun sounded as it tore into those not-so-kinder-suprise eggs? Thats a nostalgic sound that Probe reduced to a simple unimportant repeating snap.

But wait! Theres more: Unless I misread the title, these are Xenomorphs were killing, right? Every single one dies with what could be a cry from a very distempered seagull. Squawk here, scree-awk there. Totally unsatisfying, especially considering the frequent rate of enemy spawns. Did they think it was enough to terrorize the player with enemies who would freeze in mid-air while taking damage? The larger aliens explode with a moderate screen shake, so I suppose thats something.

If nothing else, this experience verifies why I so quickly put this title down back in 1993. This game exhibits some of the genre's worst traits, mechanically, and some of its best, graphically. It was logical to make use of the SNES superior graphical quality in those days, but then to slap on a survival style mode of play without any means of survival there was room for subtlety here, but perhaps not enough time or interest in the development cycle. Alien fans can easily find a superior retro experience in the vastly superior Atari Jaguar first person shooter, Aliens vs Predator. Good hunting!

If you enjoyed this Alien 3 review, you're encouraged to discuss it with the author and with other members of the site's community. If you don't already have an HonestGamers account, you can sign up for one in a snap. Thank you for reading!

© 1998-2022 HonestGamers
None of the material contained within this site may be reproduced in any conceivable fashion without permission from the author(s) of said material. This site is not sponsored or endorsed by Nintendo, Sega, Sony, Microsoft, or any other such party. Alien 3 is a registered trademark of its copyright holder. This site makes no claim to Alien 3, its characters, screenshots, artwork, music, or any intellectual property contained within. Opinions expressed on this site do not necessarily represent the opinion of site staff or sponsors. Staff and freelance reviews are typically written based on time spent with a retail review copy or review key for the game that is provided by its publisher.