Jydge isnt going to taunt me into mocking its ludicrous spelling gimmick is, if nothing else, a little box of surprises. At first glance you might think its one of those top down shooters: all stealth kills, lurking in the shadows and budget-Metal Gear Solid-ness. The surprise is that it absolutely is that sort of experience and, and the same time, completely isnt.

Sometimes, I played an unseen assassin, putting high-powered slugs into the back of a thugs head before he had any idea I was there, or bouncing a high-velocity laser beam around a corner to fry someone where he stood while I chortled out of sight. Jydge makes it very easy to be a refined killer of criminals and sometimes thats who you have to be. Only sometimes, screw that, why not be a violent physcopath? Load yourself up with inch-thick armour, pick up a machine gun and go nuts. Shoot anything that moves and shoot anything that doesnt move (it's not your fault they didnt have the good sense to run). Doors? Those are for the weak. Punch your way through the walls instead and shower everyone inside with chunks of plasterboard and bullets.

Jydge doesn't just let you be both of these things; it outright demands it. As a law enforcer that exists somewhere between RoboCop and Judge Dredd, youre dropped off outside eighteen crime scenes and told to go pulp some perps. At least, that's true for the most part. Progression is locked behind how many medals you obtain in each mission. Obtaining enough medals often means replaying each crime, and coming at it from a completely different angle. Sometimes its as simple as killing all the criminals or freeing all the hostages. Sometimes youre asked to go through the level without being seen, or while taking zero damage. Sometimes, your objectives completely contradict each other, like when one stage requests a speed run on one hand and insists you waste time looting of all available containers on the other. Jydge deals with this by not forcing you to clear every objective at once; you can take multiple runs at the same levels, chipping away at the requirements as you go. 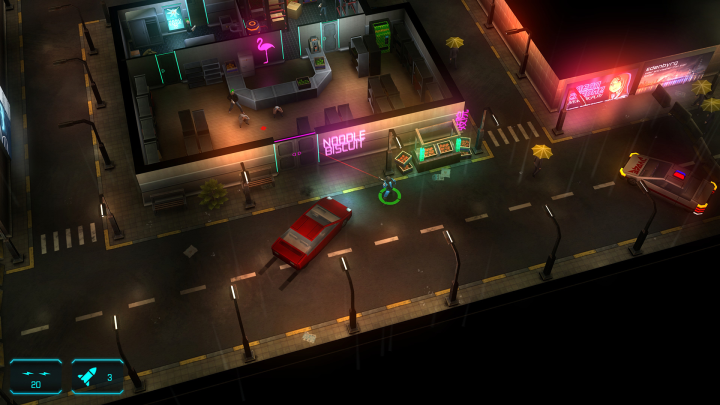 It helps that certain aspects of each stage permanently change as you interact with them. Boxes full of cash remain looted, stopping you from returning again and again to the same levels to top off your funds and ensuring that any "fully looted" objectives can be completed over several runs. Speed runs can be aided by finding keys to unlock doors, which stay unlocked and might provide more direct routes to your objective or speedier escape routes. Being able to eliminate some of the bigger enemies permanently helps with "kill everyone" or "zero damage" challenges.

Your ability to shape the environments is of some obvious help, but the option to redesign your Jydge from the ground up before every mission is often the real key to success. To begin with, this wont feel so useful; with scant medals under your belt, youre forced to plug away at only the most rudimentary of tasks while your arsenal quietly grows in the background. Confiscated money helps you unlock slots in both your Jydge and his gloriously hammer-shaped weapon (which is, of course, named The Gavel), giving you the chance to employ multiple options. Using the correct combination of perks opens up different avenues that produce new paths around tricky obstacles.

One level had a brute of a sub-boss who I just could not kill. He had a mountain of HP, and rather than just plug away at me with some hi-tech firearm like the rest of his goons, he sprinted right at me and pummeled me to death. I tried equipping speed boosts, but he was still faster than me. I tried investing in numerous ammo buffs to bring their power up, but I couldnt hurt him enough before he closed the gap. Armour and health buffs didnt hold out long enough to get the job done. Hurling rockets at him meant I suffered splash damage by the second shot because he was right in my face. I bought a gun perk that added a knock-back effect to my weapon, but it made little difference. After multiple failed builds, I took a few blocks of C4, dropped them by the door he was guarding, and then triggered them just after hed started his mad chase. It turned him into a fine blood mist. It tasted like victory. 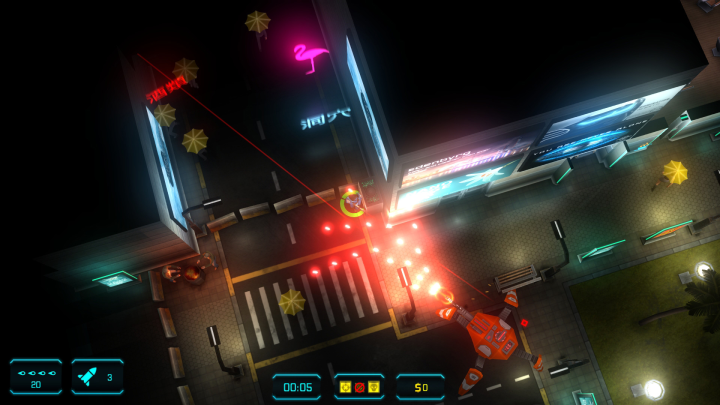 Only by the time you finish the second chapter does medal collection feel like a mandate, with the third chapter and beyond locked behind a harsher medal count than previous stages were. But thats okay; by that time youve unlocked a second tier of medals on each stage, bringing the maximum number available to six per scene on differing difficulty settings. By that time, youve amassed a real arsenal of bullet types, secondary fire options, gun perks and Jydge equipment to mix and match.

Sure, with all of these new options, I made certain mistakes in my own run. One bit of kit makes you invisible to snooping eyes so long as you dont move or fire your weapon. So long as you stand there, motionless, you dont exist to the army of goons swanning around you (unless one of them happens to bump into you). So the attack drone I let tag along, drawing in all the attention with its pew-pewing lasers, was a bad idea. And so was the electrocute perk that shot static bolts at nearby enemies; that was a dead give-away. Builds were refined and evolved as further options presented themselves. Shadow cloaks and sniper slugs were equipped for stealth runs, health buffs and magazine upgrades for rampages. Hacking tools were brought along to open secret doors, or to plunder pesky locked loot crates. Standard ammo was switched out for something that remained deadly to criminals, but harmless to hostages that got caught one too many times in the crossfire.

As you play it, Jydge slowly becomes a kind of chaotic open canvas, inviting you to take it on in any fashion you choose, while forcing you to invent your own solutions to rigidly set challenges should you wish to progress. It can surprise you like that.
4/5

If you enjoyed this JYDGE review, you're encouraged to discuss it with the author and with other members of the site's community. If you don't already have an HonestGamers account, you can sign up for one in a snap. Thank you for reading!

© 1998-2021 HonestGamers
None of the material contained within this site may be reproduced in any conceivable fashion without permission from the author(s) of said material. This site is not sponsored or endorsed by Nintendo, Sega, Sony, Microsoft, or any other such party. JYDGE is a registered trademark of its copyright holder. This site makes no claim to JYDGE, its characters, screenshots, artwork, music, or any intellectual property contained within. Opinions expressed on this site do not necessarily represent the opinion of site staff or sponsors. Staff and freelance reviews are typically written based on time spent with a retail review copy or review key for the game that is provided by its publisher.