In my restless dreams, I see that game.

You promised you'd take me there again someday, Konami, you mother♥♥♥♥ingshitkicking♥♥♥♥♥sonsof♥♥♥♥♥es.

Waiting for someone to capture that spirit while actually doing something original.

Unfortunately, in spite of a commendable effort, Back in 1995 will not scratch that itch in a meaningful way.

The entire goal of this game is to milk them elusive nostalgia feels, and it does that to a shallow point; it manages to get the good, the bad, and the ugly aspects of classic survival horror. You are Kent, a dude just trying to get his daughter back? Or maybe get to a tower in the distance? It isn't clear. But after a near blow for blow Silent Hill 2 monologue you're thrust into the action, as it were.

If you've played any classic survivals it nails the look (something between Silent Hill and Alone in the Dark). Heck, if you haven't just check it out on Youtube, then come back. 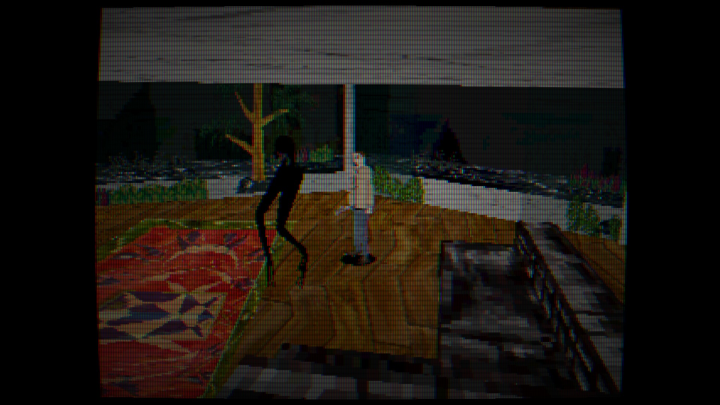 So it nails that to a tee, right? The aesthetic, anyway. But it lacks the twisted soul. The first few enemies you encounter are like sadder, slower cousins of the fat dragon statues in the original Dark Souls (sans fire breath), and you can kill them with little effort  every strike interrupts their attack. As a matter of fact, with the exception of one behemoth beastie every critter (I counted three, maybe four?) is pretty easy to kill and not in the least intimidating. There are save points at every potential encounter, bullets everywhere, and an obscene amount of healing items... and far as I can tell no enemies ever respawned.

The sound design, where a game like this (SILENT HILL) should shine, falls super flat. Prepare your ears for the same footfalls for two to three hours, regardless of whether you're stepping on marble or rug or steel. It got to be very grating (nearly as grating as my single speed  SUNDAY STROLL).

Between the awkward fixed camera angles and white noise/scan lines I was nursing a mild headache by the end of my playthrough... that's what Back in 1995 is trying to emulate, yes (the look, not the headaches probably), but searching for a key in a cramped office space for thirty minutes when every turn results in a sudden camera change was pretty jarring. 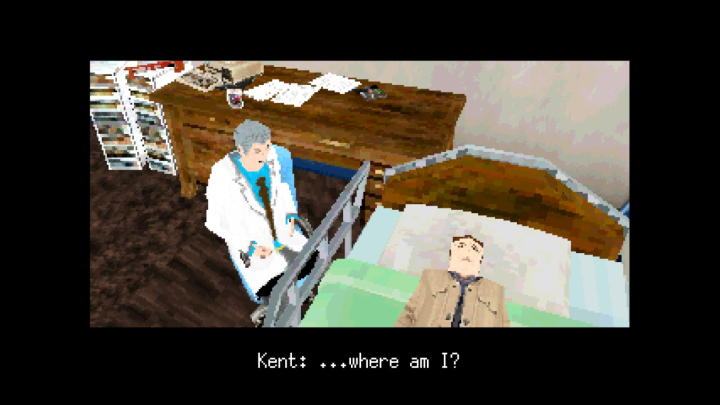 So they've screwed the pooch with story, horror, atmosphere... what about the puzzles? Silent Hill in particular is known for its (sometimes divisive) puzzles. Does Back in 1995 have any? If by puzzle you mean searching through notes for a number combination then you are in luck! That is the extent of it.

I appreciate what the folks at Throw the warped code out were trying to do here, but it isn't enough to make a handful of flesh colored turd monsters wandering around a boring, lifeless environment compelling or spooky or good. I didn't care about my player character, I didn't care about getting to the tower or finding my daughter, because I was given no reason to care. I encountered three characters, each one less interesting than the next... I just don't know. Then the story just fizzles out in the lamest way and it's over in just under two hours (that includes 20, 30 minutes of looking for a key or number combination).

It wasn't good. It wallowed in the past and fell victim to the same pitfalls (and then some!) of classic survival horror without applying over 20 years of gaming knowledge and wisdom garnered since then. Back in 1995 feels like a half finished student product: bare bones with some potential, and too referential to have a distinct voice.

If you enjoyed this Back in 1995 review, you're encouraged to discuss it with the author and with other members of the site's community. If you don't already have an HonestGamers account, you can sign up for one in a snap. Thank you for reading!

© 1998-2021 HonestGamers
None of the material contained within this site may be reproduced in any conceivable fashion without permission from the author(s) of said material. This site is not sponsored or endorsed by Nintendo, Sega, Sony, Microsoft, or any other such party. Back in 1995 is a registered trademark of its copyright holder. This site makes no claim to Back in 1995, its characters, screenshots, artwork, music, or any intellectual property contained within. Opinions expressed on this site do not necessarily represent the opinion of site staff or sponsors. Staff and freelance reviews are typically written based on time spent with a retail review copy or review key for the game that is provided by its publisher.