Most games that offer branching narrative paths that treat choices like candy: Take your pick, dont worry about the consequences, theyre coming. The morality of those choices is rarely discussed, just presented. Virginia, contrariwise, does not offer you that conceit: Observations are yours and progression is partially interaction based. Through the wisened eyes of Anne Tarver, you experience a short tale of the stresses two FBI agents experience whilst investigating a missing persons case in the town of Kingdom. 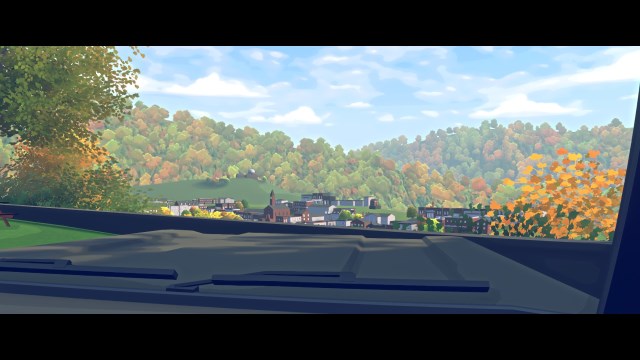 How often does the FBI do that sort of thing, anyway? According to the developers the story is based on real events, so they must. The story and its characters are fictional, though, so lets just take that as pat and move on. Agent Tarver is a graduate who is assigned her own investigation in addition to the primary one, and wrestles during the features exploration of her responses and feelings about them. Responses you have no hand in because they, too, are her own.

While this title has gone on to win a BAFTA award for its music, I can see why it was passed over for less linear titles. It concerns the unique nature of interaction that games afford us, and warrants mention. Agency and its treatment in video games is a delicate issue. We dont like having it taken away from us, and Virginia very much does that. It runs against the grain of games that are completely linear in nature, e.g. Half Life 2, in the attempt of handing off the motivation to the player. 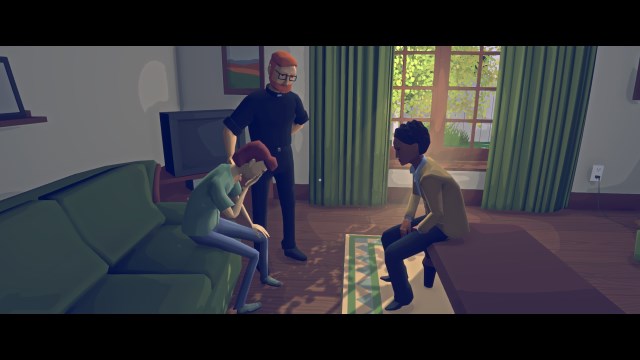 Begin Feature is what youll click to get things going. This means it was planned, built and presented like a feature film. Its cinematography is to be lauded. Variable State, however, is not the only studio to try its hand at bridging this media gap, but the constraint and cost of such a production is proving untenable at the industry level. Whats more it commits the worst possible sin in gaming: Boring movie goers who have already paid is one thing; boring gamers who will avoid your studio like the plague is a curse that can destroy a team with little to lose.

Thats not to say Variable State has not made an admirable, gorgeous effort. Its world and characters are stylized a step beyond bland cel-shading, and convey essential body language clues intended to communicate intent without dialogue. Its a daring risk, one I gather they hoped the player would fill. This is where the subjective part enters into the equation. If you like your stories with lots of question marks, this is where you need to be. 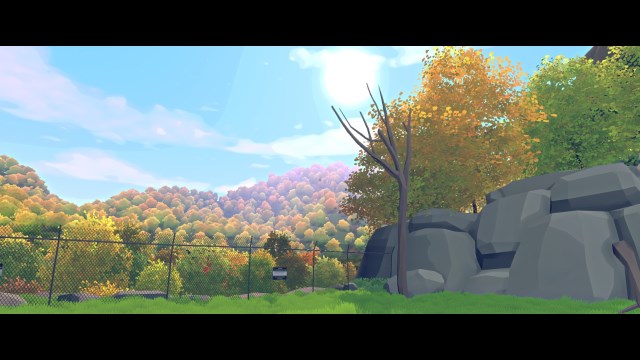 Apparently it was the developers intention to provide a perplexing and confounding experience, and they succeeded. Even so there was enough to intrigue me and I admit I was impressed with some of the subtle effects they managed with lighting, motion blurs and scene setting. For example, this is the first time Ive seen grass whizzing by through a car window rendered exactly as Ive wanted to see it since I was kid. The are painstaking effects that redeem Unitys occasionally maligned game development software.

Effects that create a tactile, emotional effect draw you into the world of Virginia, just to be strictly bound to single click interactions. It seemed to me that the skeleton of this story might not stand up well under its own weight if thoroughly examined. If it would, why not let me dig a little deeper? 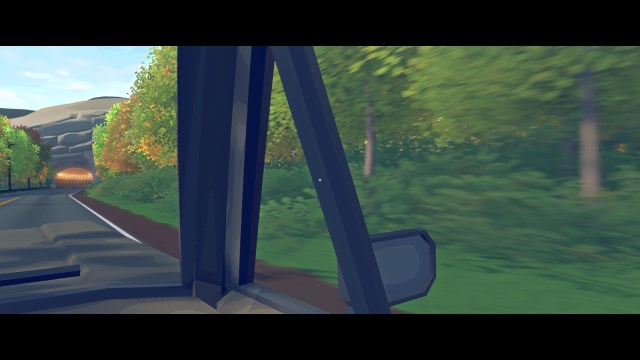 Exploration deprivation feels like an apt phrase to attach to such an experience. Though I instigated actions by finding the interactables, I felt disconnected from key events because I had no say in them. There are no mini games, no collection quests, no branching paths in what is hesitatingly entrusted with the title video game. I wanted to explore options, but was instead confronted with other perspectives and visions of what might be. Symbolism that is literary in nature added as much confusion as it did detail.

Was I satisfied with the experience? No, and I doubt you will be either. This game is so rigidly structured that you would gain little more from it as a hands off movie ticket. In fact, it might well have served the story better to let the reel play for two hours where more detail could have been introduced instead of baiting the player with a long running walking simulator. It certainly feels that much longer because you cant run when it feels necessary. Youre trapped in someone elses head, and though the scenery and graphics are pretty, my struggle to relate is hamstrung.

Games have the unique opportunity to put you in another's shoes so that their choices become yours, and Virginias stated goal leaves you wanting for control youre never given. Its a beautiful letdown, though the story is expertly told. If you like a good mystery that leaves you asking questions, youll welcome this experience, and with the rarity of pure narrative games it comes highly recommended. Just know what youre getting into: Almost satisfaction.

If you enjoyed this Virginia review, you're encouraged to discuss it with the author and with other members of the site's community. If you don't already have an HonestGamers account, you can sign up for one in a snap. Thank you for reading!

© 1998-2022 HonestGamers
None of the material contained within this site may be reproduced in any conceivable fashion without permission from the author(s) of said material. This site is not sponsored or endorsed by Nintendo, Sega, Sony, Microsoft, or any other such party. Virginia is a registered trademark of its copyright holder. This site makes no claim to Virginia, its characters, screenshots, artwork, music, or any intellectual property contained within. Opinions expressed on this site do not necessarily represent the opinion of site staff or sponsors. Staff and freelance reviews are typically written based on time spent with a retail review copy or review key for the game that is provided by its publisher.