It's been five years since the initial Japanese release of Danganronpa 2! Finally, the third game in the series (not counting spin-offs) is available in the West, after having released in Japan earlier this year. Hope you avoided spoilers...

If you're a fan of the series, you probably know what to expect from the setting (and if you're new to the series, I strongly suggest you start from the beginning, though this review is safe to read). Sixteen high school students wake up to find themselves trapped in a strange school, with no memory of how they got there. Before long, an evil robot teddy bear named Monokuma appears to tell them they're being forced to play a Killing Game. To win their freedom, the kids must kill each other. Whenever a murder is committed, there will be time to investigate the crime and then a class trial is held. If the participants can figure out who the culprit is, that person will be executed. If the wrong person is convicted, everyone but the true culprit will be killed and the murderer is free to go.

Danganronpa V3 plays like an Ace Attorney game, with a bit of Persona sprinkled in for good measure. Every chapter gives you some free time to spend with your classmates. You can give them presents to raise your bond with them, learning a bit more about them in the process and eventually earning new skills to use during the Class Trial phase. These interactions help raise the emotional impact when people turn up dead or turn out to be killers. Even the more one-note characters get added context from these scenes. It's impossible to max out your bonds with everyone in one play through, but completing the game unlocks several weird bonus modes, including a free play mode where you can romance (and bromance) people to your heart's content. 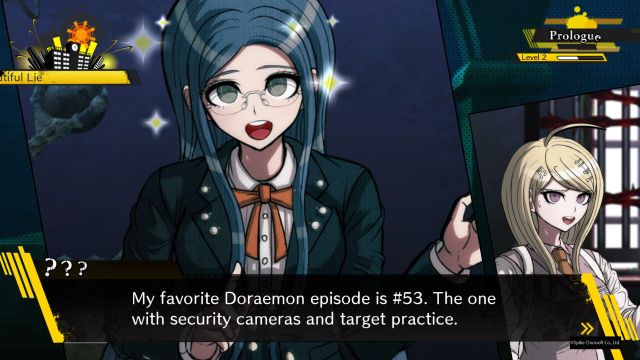 When a dead body is inevitably discovered, it's time to start investigating. By checking the crime scene, related rooms (like the victim's quarters or personal lab, for example), and gathering testimonies and accounts from your classmates, you'll gain truth bullets, which you can use during the class trials.

The trials are where the real twists happen. The main mechanic of the class trials is the Nonstop Debate, in which characters will all talk and speculate together. By firing truth bullets at specific phrases, you can counter, agree with, or even lie to turn the debate in the direction you want it to go. This is also where things seem to get more bloated with every new game in the series. On top of the nonstop debates, there are half a dozen other mini-games you'll have to play to make it through the trials. Some of them are twists on the Nonstop Debates, such as Mass Panic Debates (which have multiple characters throwing their arguments out at once). Others are separate and more time-consuming, like Psyche Taxi, an Outrun-inspired driving mini-game in which you collect letters to create questions and then drive in the correct lane to choose the correct answer. It's stylish, but not very much fun, and I'd rather just be given questions to answer without the driving. 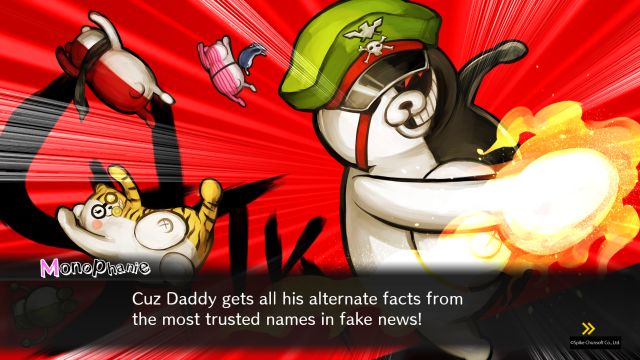 Naturally, a visual novel is only as good as its story, and I predict this one will be divisive. Some pretty insane twists happen early and late in the game, but the middle drags a bit. The major twists are mind-blowing as they occur, but I'm not sure the story is better or worse for the effects they have. The individual chapters are all engrossing to various degrees, but it's hard to compare the second case to the first one without thinking That's it? OK, I guess.

As always for the series, the characters range from deceptively interesting to completely flat, with only one personality trait repeated until the end of the game or until they die. It's an anime game, so expect some of the typical idiotic anime tropes, like a boy going completely out of character to spy on some girls while they're changing. The game is still missing actual animations, jumping from still portrait to still portrait while characters talk. Those portraits are emotive, but after a decade of excellent Ace Attorney animations, they're somewhat boring.

The game uses the series' traditional art style, with flat characters and objects in a surreal 3D world, where the perspective always seems to be intentionally off a bit. The school is a strange place, overgrown with plants and full of rooms and hallways you wouldn't find in a normal high school. The music jumps between atmospheric and energetic as the tone of the story shifts, but a lot of it is reused from the first two games. 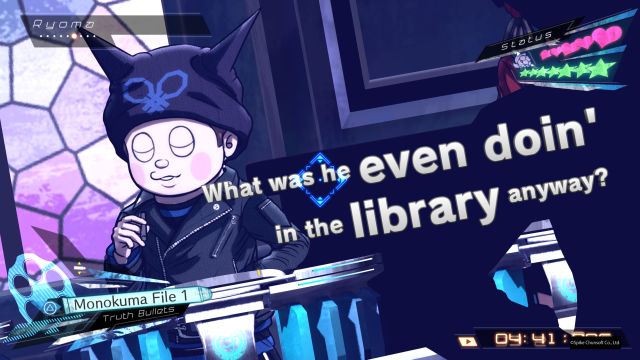 The localization has a few blemishes. Occasionally the words being spoken won't match the text. Once in a while, the meaning of a line will be flat out wrong. One character will say This shows the murder happened after 8:00 a.m., and another character will agree, saying Yes, that lines up with the autopsy that says the murder happened before 8:00. It's weird, but rare, and it's always easy to figure out which statement is correct. The script is entertaining, often funny, though some players may find one particular exceedingly crass character too much to handle. The English voice cast does a great job giving life to the characters. The Japanese voice track is also available.

Danganronpa V3 is an uneven, but still thoroughly enjoyable, third proper entry in one of the better visual novel series out there. It's a bad starting point if you're interested in seeing what the franchise is all about, but fans of the previous games should certainly check it out.

If you enjoyed this Danganronpa V3: Killing Harmony review, you're encouraged to discuss it with the author and with other members of the site's community. If you don't already have an HonestGamers account, you can sign up for one in a snap. Thank you for reading!

© 1998-2021 HonestGamers
None of the material contained within this site may be reproduced in any conceivable fashion without permission from the author(s) of said material. This site is not sponsored or endorsed by Nintendo, Sega, Sony, Microsoft, or any other such party. Danganronpa V3: Killing Harmony is a registered trademark of its copyright holder. This site makes no claim to Danganronpa V3: Killing Harmony, its characters, screenshots, artwork, music, or any intellectual property contained within. Opinions expressed on this site do not necessarily represent the opinion of site staff or sponsors. Staff and freelance reviews are typically written based on time spent with a retail review copy or review key for the game that is provided by its publisher.