If anything, Greendog has a very... not strong, but it has a very eccentric first impression. The lanky titular character, a shirtless teenager with no facial features and a hairdo that looks like a weird straw hat, walks into frame, jumps, then hits the ground in a surfing pose. After taking control, you then have to travel Grenada's forests, repelling leaping piranhas and birds that go all wide-eyed when they get close, and doing so with a frisbee that retracts stupidly fast. Totem poles litter the landscape, and if one is rapidly hit with your omnipotent flying disc, fries, soda, and power-ups are hurled out. The game only gets stranger from here, as Greendog wreaks havoc across six Caribbean islands in a quest to remove a cursed pendant around his neck. To save the world? No, to regain his ability to surf. 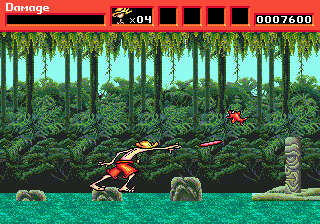 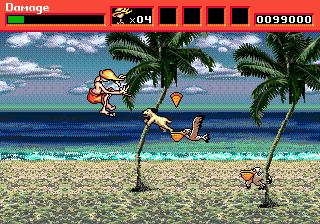 Greendog's oddball enthusiasm, with the backing of a Caribbean theme and soundtrack, easily makes it stick out from other action-platformer games on the console. It's just a pity the same level of passion wasn't injected into the "game" portion. You feel it immediately, too, which is the depressing part; for some reason, your protagonist is really awkward to control, and it's mostly due to his hitbox. When he ducks, which does the surfing pose, both arms stretch out, making him susceptible to damage from nearby hazards. His jumping animation is equally bad, due to the feet hitbox changing location as it's happening. This makes landing on small platforms frustrating, because you'll either accidentally fall through a hole, on a bed of spikes, or in the water, the latter having piranhas that stick to your body and drain your health for a few seconds.

Even if these control issues were corrected prior to release, it wouldn't drastically improve the game's overall quality; Greendog was intentionally made to infuriate players over simple, basic stuff.

Totem poles and other power-up containers, for example, are consistently positioned at the border of ledges or land, meaning you have to risk tripping in the water or down a pit to catch items as they fall in those directions. However, stage two makes it amazingly transparent how badly this game wants to screw you in asinine ways. With any other stage, the power-up containers are stationary objects that don't cause any problems. In stage two, though, the containers are actual seagulls that fly away once there's no more items... and simply touching them damages you. Just jump over or duck when they fly away, right? There's a stupid catch: your protagonist's dog is introduced in this stage, and he devours all items that come flying out if you don't get them in time. So you have to jump headfirst into the seagull if you want those items... while also avoiding normal enemies.

Aggravation continues to build as the third stage literally plunges Greendog inside an aquarium. If this was meant as a silly joke, then it's a terrible one, due to the already stubborn controls becoming even more floaty and uncontrollable. It's a complete cluster of an environment, as you have to avoid being sucked in by vacuum tubes that send you to the start of the stage, carefully hop to hit fish, and try not to touch fishing hooks that are smack in the middle of the play area and stationed right beside other hazards that you're hopping over. Oh, and that last obstacle is a one-touch kill. Not ending there, you also have to keep oxygen in check by stepping on shells; it's not so terrible for the stage's first half, but the temple second half and its jarring maze-like design turns it into a horror show.

Greendog sadly never snaps out of its droning, dreadful vibe showcased within those first three stages, continuing the misery in different settings for the remainder of the game; skating segments are dreary because you have to slow down to avoid landing in spikes, death pits, and springs that send you to spikes and death pits; swift, crumbling platforms don't have any indication that they'll disintegrate before stepping on them; you can't look up or down while platforming on small blocks; your stupid dog makes a return; bonus rounds take too long and you can actually lose lives in them. I really don't think the devs depicted Caribbean natives in a flattering light, as well, especially in stage five. Here, Greendog enters and attacks a Saba village, who are really just defending themselves from this weirdo protagonist, and kills its inhabitants. All in the name of surfing... 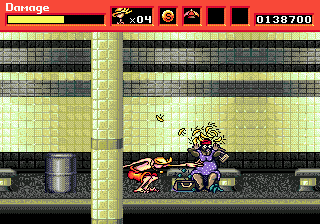 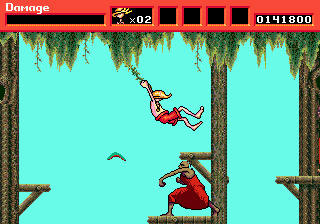 Greendog feels like that one person constantly being cool in public, who seems like an awesome friend to have if given the chance. But then you finally hang around them and, not only are they the shallowest human being on the planet, but they go out of their way to make others suffer for their own amusement and pleasure. You're in denial at first, trying fruitlessly to find any redeeming traits, and the only notable quality you discover is that they can hum a really catchy Caribbean tune. Greendog is one of the most joyless adventures you'll have on the Genesis, and the only potential use it can have nowadays is be a case study on what not to do when creating a platform game.

If you enjoyed this Greendog: The Beached Surfer Dude! review, you're encouraged to discuss it with the author and with other members of the site's community. If you don't already have an HonestGamers account, you can sign up for one in a snap. Thank you for reading!

© 1998-2021 HonestGamers
None of the material contained within this site may be reproduced in any conceivable fashion without permission from the author(s) of said material. This site is not sponsored or endorsed by Nintendo, Sega, Sony, Microsoft, or any other such party. Greendog: The Beached Surfer Dude! is a registered trademark of its copyright holder. This site makes no claim to Greendog: The Beached Surfer Dude!, its characters, screenshots, artwork, music, or any intellectual property contained within. Opinions expressed on this site do not necessarily represent the opinion of site staff or sponsors. Staff and freelance reviews are typically written based on time spent with a retail review copy or review key for the game that is provided by its publisher.