Using projectiles from your mouth, you destroy a spiked pillar blocking the path... then get killed by the pillar's five-way, self-destruct flame attack. Start over. Destroy a spiked pillar and all subsequent pillars, dodge their five-way attacks, jump off a seemingly innocent ledge... and into a pit that wasn't visible on screen. Start over. Destroy pillars, dodge their attacks, jump further off the dangerous ledge and land on solid footing, make your way up another hill... and get killed by a falling enemy you had no way of knowing was there. Start over.

That's all in the opening stage, too.

For first-timers, Toki: Going Ape Spit's greatest hurdle is making it through the opening stage without quitting in frustration; your protagonist, a human transformed into a smiling ape that looks more like a chimp, moves at a surprisingly slow pace, can die in one hit, and punishment for death is spawning at the beginning of the current area. It's not like most other side-scrolling action-platformers where you can bolt through several obstacles and enemies, get hurt a few times, die, and either respawn at a nearby checkpoint or on the spot. Toki wants players to take their time, observe surroundings, especially with the up and down functions of the d-pad, and even be weary when taking on enemies, as the situation may not be so transparent. Disregarding these methods guarantee a journey littered with failure. 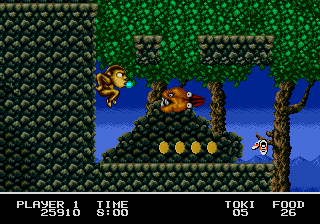 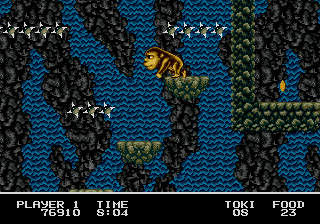 Over the course of nine stages, you'll encounter various, morbid creatures and objects, such as a flock of flying sting rays, zombie apes that shoot tiny rockets from their hands, and spiders you quickly need to kill before they start spraying flames in all directions. Even after learning to counter their patterns, some very peculiar enemy placement can put you in dreary circumstances. Plodding across falling platforms seem simple enough, until a wall-creature greets you at the end, and you only have a second to kill it and quickly resume movement. Falling into unknown areas mean reacting quickly the moment you land; though, if you start shooting projectiles like crazy, a nearby spiked pillar could get destroyed.

There's such an emphasis on caution, that Toki often feels rewarding when you overcome its hazards, more so when conquering them on the first attempt; detect a flying enemy just barely hovering inside the screen's frame, and act accordingly; realize there's a pit being cloaked by a "foggy" foreground object; make a stop right before an exit, take the time to look down below, and discover a ditch containing hidden goodies. Continue making these observations throughout, and you'll even discover clever shortcuts. In one stage, pillars decorate a volcanic setting, but look closer at some, and you'll see tiny platforms accompany them, possibly leading to a quicker exit. Some shortcuts are boldly shown to you at the start of certain acts, but the beauty is, it'll take some time to connect to these byways, meaning there's a high likelihood you'll actually forget their existence.

These examples might not sound so... rousing, but that's a huge part of what makes the game's overall design interesting. Toki's commitment to delivering a straightforward platformer experience almost makes it unique. It doesn't try to overburden you with needless gimmicks, nor does it put restrictions in place for an overly forgiving stage layout, both likely to make for a dangerously shallow adventure. The game thrives on putting you through small obstacles, and while said obstacles don't seem amazing on their own, it's an entirely different situation when you have to go through an entire stage filled with them, one after another. And you have to do all this in one sitting, while avoiding simple deaths that send you to the start of an act, undoing all your progress.

Having a character that moves at an easygoing pace doesn't sound so bad now, does it? 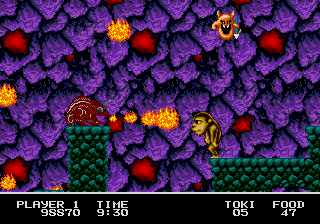 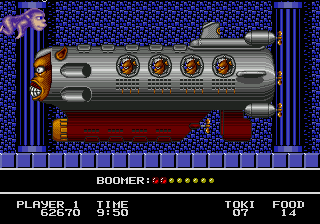 However, the game isn't flawless in execution of its particular brand of level design, as there are genuine moments of cheapness; the aforementioned falling enemy in the first stage is one such sore spot, as is a moment where you have to make a literal leap of faith to the exit in stage five, and your chances of falling down a pit on your first try are tremendously high... But these blemishes are thankfully few and far, with any more potentially ruining the experience. Despite Toki: Going Ape Spit's "plain" template, the slow-paced, methodical platform design never truly wears out its welcome, which is a testament to how structurally-solid it is.

If you enjoyed this Toki: Going Ape Spit review, you're encouraged to discuss it with the author and with other members of the site's community. If you don't already have an HonestGamers account, you can sign up for one in a snap. Thank you for reading!

© 1998-2021 HonestGamers
None of the material contained within this site may be reproduced in any conceivable fashion without permission from the author(s) of said material. This site is not sponsored or endorsed by Nintendo, Sega, Sony, Microsoft, or any other such party. Toki: Going Ape Spit is a registered trademark of its copyright holder. This site makes no claim to Toki: Going Ape Spit, its characters, screenshots, artwork, music, or any intellectual property contained within. Opinions expressed on this site do not necessarily represent the opinion of site staff or sponsors. Staff and freelance reviews are typically written based on time spent with a retail review copy or review key for the game that is provided by its publisher.